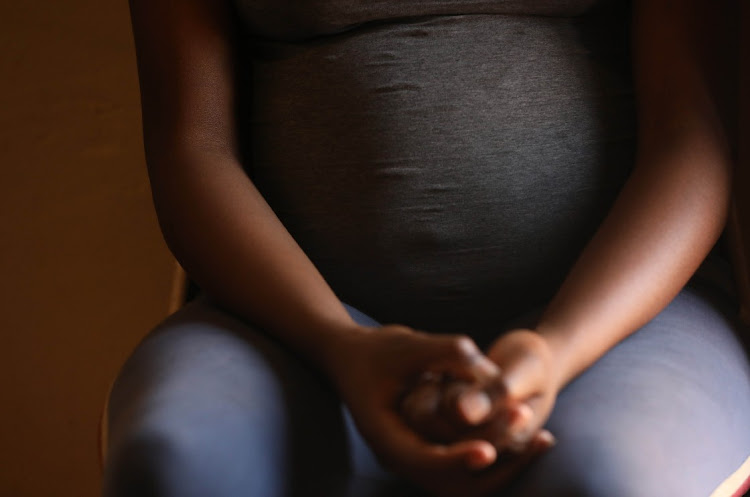 The tragic stories behind some of the 23,000 girls who reportedly fell pregnant between April 2020 and March 2021.
Image: Veli Nhlapo

A 16-year-old girl from Cosmo City in the northwest of Johannesburg is just three weeks away from giving birth. She is one of at least 23,000 girls between the ages of 10 and 19 who the Department of Health reports fell pregnant between April 2020 and March 2021.

But the story of *Bonakele is one of tragedy.

In December last year, she was raped, allegedly by a man several years older than her who lives in the same community. He is the father of her unborn child.

While the department said of all the reported teenage pregnancies, almost 3,000 of these young women opted to terminate their pregnancies. Bonakele could not.

“When she came to see us, she was 15 about to turn 16. We had to refer the matter [to a medical centre] because when she came to us, she was past the 20 weeks [threshold for termination]. Obviously by law, we could not do that and we don't generally deal with such cases,” said Ngaa Murombedzi of non-profit organisation Women and Men Against Child Abuse (WMACA).

Murombedzi said Bonakele had come to them for a help through a community member, Nomsa Dumbisa.

She has said that if they give her this child [after birth], she will kill it

“I decided  to assist when her mother broke down and told me about this in June.  The child had spoken out about the rape [after it happened] and was taken to the doctor and the police station. She was given medication at the hospital, but we don't know what the instruction was because a few months later, her mother noticed she was pregnant,” said Dumbisa.

With just days to go before the arrival of her rapist's child, Dumbisa said the expectant teen had made her stance clear.

“She has been going for counselling but in the last session, she told her mother and psychologists that she doesn't want the child. She has said that if they give her this child [after birth], she will kill it.”

Murombedzi said talks were under way for her to give the child up for adoption.

Dumbisa said the family was struggling to cope, with the mother of the teen battling to give words of comfort to her daughter.

A teacher has been fired for having a sexual relationship with a teenage pupil who later committed suicide because she was heartbroken.
News
1 year ago

According to the statistics released by the Gauteng health department though, Bonakele isn't even among the youngest of the pregnant girls.

Katharine Hall of the Children's Institute at the University of Cape Town said it was possible that the number of teenage pregnancies was even higher than what is reported.

“The Department of Health’s district health information system is mainly limited to public facilities. It might not be the full picture ... I can only infer that the total pregnancy count provided is a product of the number of known pregnancies (where adolescents have reported to health facilities) and the number of known terminations.

“It will exclude pregnancies that are unknown or undisclosed, miscarriages, terminations that are not under the supervision of a health facility or practitioner included in the count,” Hall said.

In 2018, the institute conducted an investigation into pregnancies of teens and youth. Back then, the numbers collated by the institute revealed there were 57,000 pregnancies in the province but these included people between the ages of 15-24.

There was no data available for those younger as they were generally not viewed to be of child-bearing age.

The WMACA is also assisting another family from Alexandra whose daughter would have fallen into the age group of 10- to 14-year-olds who are now mothers.

A six-year-old girl was allegedly raped by a church caretaker on the West Rand at the weekend, Gauteng police said on Monday.
News
9 months ago

The Alexandra family has a 14-year-old daughter who was allegedly repeatedly raped by two neighbours on different occasions. Her rape came to light when she collapsed at school earlier this year as she bled.

“The two men are in their 50s,” said Elizabeth Mokoena of the Alexandra Kidz Clinic.

“It seems like she was given pills to drink to terminate the pregnancy. But when she got to school, she got sick and was bleeding. The mother came, took her home and while they were home, the foetus came out,” said Mokoena.

The foetus was kept for a few days and then she discarded it.

“She did not know that she was throwing the evidence away because that would have led to DNA evidence of who had raped her child,” said Mokoena.

These high pregnancy numbers have led to questions about where and who the fathers of these children may be.

Murombedzi said while it was possible that children were experimenting with sexual activities, it needed to be explored why a child as young as 10 would be exposed to such activities.

“I highly doubt a 10-year-old is consenting to having sex and I stand to be corrected on this. But we have to acknowledge that 12-year-olds may be having sex and even the law allows them to get contraceptives at that age,” Murombedzi said.

“While the law allows it, can you imagine a 12-year-old walking into a clinic to get contraception and condoms? They would be ridiculed because society doesn't encourage children to have positive sexual behaviour inasmuch as the law says they can,” she said.

DA MP Refiloe Nt’sekhe said these figures raised a lot of questions about the role of the departments of education, health and social development to educate teens on safe sex.

“Teenage pregnancy remains a serious social and health problem in SA. It poses a health risk to both mother and child, and it also has social consequences such as continuing the cycle of poverty and early school dropout,” she said.

She called for the departments of education and social development to ensure awareness campaigns were prioritised and run all year round.

Meanwhile, Prof Ramodungoane Tabane from Unisa's psychology of education department said it was worrying that despite the sexual education that was happening in schools, such high teenage pregnancy numbers were still being seen.

“What is being taught at schools is not being practised and it might also be landing on the laps of parents that we allowed the schools to be doing more of the parenting in terms of such issues of sex education,” said Tabane.

In her parliamentary response, Mokgethi could not say whether any arrests emanated from the pregnancies of minors (statutory rape), saying only that the information was collected and conveyed to the social development department and the police.

The police also could not immediately say how many statutory rape arrests had been opened with them during the period under review, saying only that they categorised their rape cases according to gender and not necessarily age.

Tabane suggested that either way, it was the victims who fell pregnant who bore the biggest brunt, rather than the father.

“That girl may stay at home and not return to school ... They stay home to take care of their children and after a year, feel they have been left behind and may not want to go back to school. Therefore, the vicious cycle of the girl child not entering the academic market or job market broadens and widens. That boy child has an opportunity of going back to school. He is not the one that 'carries' that pregnancy into school,” Tabane added.

While these pregnancies were reported at a time when the lockdown was under way, with the schooling calendar being disrupted, Tabane said this did not necessarily mean that Covid-19 was to blame but perhaps a lack of supervision.

Tabane said the fathers of the children were often related to the mother.

Murombedzi says the problem is multifaceted.

The attitude of some state actors when dealing with gender-based violence cases and a lack of resources in handling these cases are some of the ...
News
9 months ago

“We cannot say the law is failing, but the people who are applying the law like a health professional who knows that a 12-year-old can come in and get contraceptives. They have a duty to train and instruct that child on how to use that contraceptive,” Murombedzi said.

“We also need to look at the emotional aspect where perhaps a child is lacking love from home and finds it in the wrong, older person and at that point, they may feel they need to express their affection and get affection as well through a sexual relationship,” she added.

*Kedibone is 17. She is a pupil at a Alexandra school and has not yet gone back to school this year after she gave birth in March.

“It is tough being a mother. I thought I could do both but I am not ready or maybe I should say I am still trying to learn how to both,” Kedibone said.

The grade 11 pupil says her daughter was not planned.

“I was taking prevention but last year, I missed going to the clinic for my pills and I kept on saying, I will go, but in the end, this happened. But I don't regret it because they say children are blessings,” she said.

The father of Kedibone's child is 26 and does odd jobs after losing his stable job during the Covid-19 lockdown last year.

“But he supports me and the child, so I am happy,” she said.

Kedibone said it was too soon to tell whether she would be going back to school next year or perhaps she would take yet another gap year to see her daughter grow.

Justice for a teen who was allegedly repeatedly raped over several months by three neighbours is hanging in the balance because of an almost two-year ...
News
11 months ago

Some things are getting better for SA children, even if the improvements are slight: Stats SA

In many key areas, things are getting better for SA's under-5s, a Stats SA report released on Monday shows.
News
1 year ago