No other person could have killed Nomia Rosemary Ndlovu's relatives but her, says the state

Judgment will be delivered on October 22 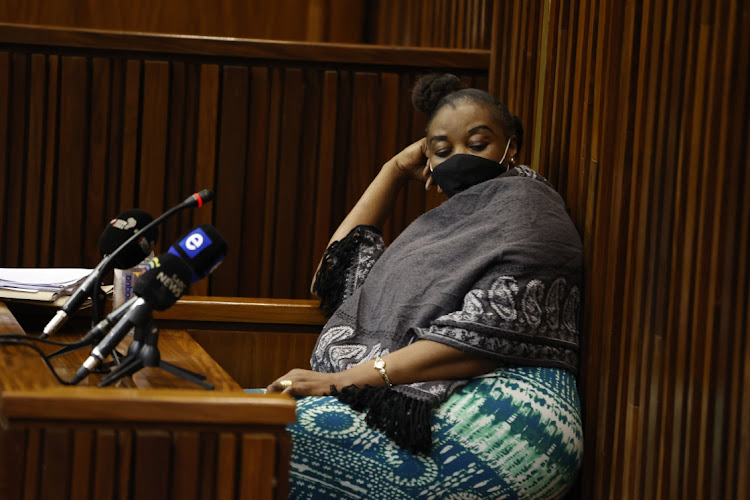 Former police officer Nomia Rosemary Ndlovu is set to know her fate next week when the high court is scheduled to deliver its judgment. File photo.
Image: Thulani Mbele

The state has highlighted how murder accused Nomia Rosemary Ndlovu’s modus operandi was similar in several of the cases where she lost loved ones under brutal circumstances.

Delivering closing arguments in the Johannesburg high court, sitting in Palm Ridge, prosecutor Riana Williams said the pattern observed was that the Thembisa-based former policewoman was seemingly the last person to see her relatives alive or she was the first one to notice them missing and report it before them being found dead.

Every time there was grief in the family, she pocketed money from life and funeral policy claims.

THE VICTIMS AND NDLOVU'S CONDUCT

When it came to the case of her cousin, Witness Madala Homu, Ndlovu is alleged to have encouraged Homu’s mother to add him to a burial society, saying this was because she was worried about his conduct. Homu's mother obliged and months later, he was found dead.

He was killed while on his way back from work in March 2012. He had been hit with a blunt object over the head.

Alleged killer cop Nomia Rosemary Ndlovu’s return to the high court on Thursday coincides with the sixth anniversary of the murder of her lover, ...
News
3 months ago

The court heard how Ndlovu had spearheaded a search for Homu in police stations in the area, ultimately leading his immediate family to his body, which had been found by Olifantsfontein police a few hours earlier.

Ndlovu had insured him for more than R100,000 but allegedly only contributed about R200 towards his funeral when the family said they were short of money for meat.

On her sister, Audrey Somisa Ndlovu, who was found dead in June 2013, Ndlovu was apparently the last person to have seen her alive on the day before her body was found. The sisters had shared a meal together at Audrey’s rented room in Thembisa. She was also the first one to have rung the alarm about Audrey being missing after she claimed she was struggling to locate her on the phone.

According to neighbours who were at the scene when Audrey’s body was found, they highlighted how Ndlovu had begun mourning prematurely, crying and calling her relatives saying the missing Audrey was dead. Ndlovu cashed out more than R700,000 in life and funeral policies opened in Audrey's name.

‘Killer cop’ Nomia Ndlovu denies tampering with evidence after her sister’s death, despite testimony to the contrary
News
3 months ago

In the case of her lover, Maurice Mabasa, who died six years ago today, Ndlovu had headed to the Olifantsfontein police station to report him missing the morning after he failed to come home.

Police officers who attended to her at the police station testified about how she had put her hands on her head and cried, declaring that “they had murdered her husband”. At this time, the police had not confirmed or told her that the body they had found in Olifantsfontein was believed to be that of Mabasa, which again showed how she had mourned him prematurely, the state said.

The court had also heard evidence from Maurice’s brother Justice and their landlord and friend, Percival Maluleke, on how Mabasa not coming home was nothing new, especially when the couple went through turbulent times. Ndlovu would instead call them, asking them to find him for her. She did things differently this time around.

It was the same with her niece Zanele Motha who died in June 2016. Motha had come to visit her for a few weeks when she was attacked in Kempton Park. She was first treated at the Tembisa Hospital. They discharged her, saying her injuries were only superficial.

Ndlovu took her home, only to rush her to the Arwyp Medical Centre the next day where she was declared dead on arrival. She had sustained internal injuries and broken ribs.

Ndlovu was again the last person to have seen her alive and pocketed almost R120,000 in policies.

Motha’s brother Mayeni Mashaba died in April 2017. He had met up with Ndlovu the day before he died. His body was found dumped in Olifantsfontein after Ndlovu claimed to have given him a lift, dropping him off at a garage on the R21 as he claimed he was headed to Pretoria.

When the police found his body, they called the last number on his call log which happened to be Ndlovu's.

An officer testified how they had called her to come to the scene and identify the body – an assertion she strongly denies. Instead, she claimed she had found out that Mashaba was missing from his family in Daveyton.

The only inference here is that the accused was the only perpetrator of these crimes and should be found guilty.

Although she had policies opened in his name, she did not claim them – allegedly because in at least one of the policies she had listed him as a spouse but failed to provide the required documentation to support this.

On Brilliant Mashego – her nephew – who was Audrey’s son, Ndlovu is believed to have again been the last person to see him alive.

He died in January 2018 and his cellphone records showed that he was with Ndlovu all the way from Johannesburg to Bushbuckridge on the afternoon and night before his body was found.

Ndlovu, however, had failed to share with her immediate family that she had seen Mashego before his death.

She also had insurance policies taken out in his name. In at least one of these, she had listed Mashego as her son, meaning the insurance company would need proof of this before paying out. She received no money after his death.

The state submitted that Ndlovu always pushed to ensure that the bodies were quickly found, so that she could submit her claims speedily to get the payouts.

Former police constable Nomia Rosemary Ndlovu had a potentially strong alibi that could prove she was not with her nephew Brilliant Mashego when he ...
News
3 months ago

The state argued that all but one of the 52 witnesses had given information that was “credible, reliable and they corroborated one another”.

The one witness who came under criticism from the state was Lakhiwe Mkhize, an alleged hitman who had allegedly been approached by Ndlovu to assist her in killing her sister Joyce, and Joyce's five children. They were to be burnt alive in their Bushbuckridge home.

When he testified, Mkhize denied that he had travelled with Ndlovu, another would-be hitman, Njabulo Kunene, and his sister Cebisile to Phomolong in Thembisa, where Ndlovu was to show them her sister Gladys’s house.

According to Mkhize, she allegedly wanted Mkhize and Kunene to kill Gladys and gave them an R800 down payment for the deed.

“The only shortcoming I will concede to is that Lakhiwe says he did not go with them to Phomolong on December 17 2017 but the accused, Cebisile and Njabulo, testified to this,” Williams said.

“That Gladys also did not testify is immaterial. But what is important is there was an agreement [to kill her],” said Williams.

Wrapping up her case, Williams said: “The only inference here is that the accused was the only perpetrator of these crimes and should be found guilty.”

Before hearing the defence’s arguments, judge Ramarumo Monama said: “If you were not sitting in court, you would think this is a book from Sherlock Holmes.”

Defence lawyer Vincent Soko said Ndlovu had insured her family members “out of the kindness of her heart”.

This was questioned by Monama, who said witnesses had testified how she was short-handed when it came to assisting in the burials. For some of her alleged victims, she contributed nothing at all to the funerals.

Submitting his closing arguments, Soko pleaded with the court to find his client not guilty, saying all the evidence they had was simply circumstantial.

Judgment is expected to be delivered on October 22.

The case against alleged killer cop Nomia Rosemary Ndlovu is set to continue on Thursday.
News
3 months ago

After weeks of evidence in the dramatic trial of alleged killer cop Nomia Rosemary Ndlovu, the 46-year-old suggested she was tired of defending ...
News
3 months ago

An emotional interview with alleged killer cop Nomia Rosemary Ndlovu's sister saw the mother of five break down in tears as she spoke about her ...
News
3 months ago