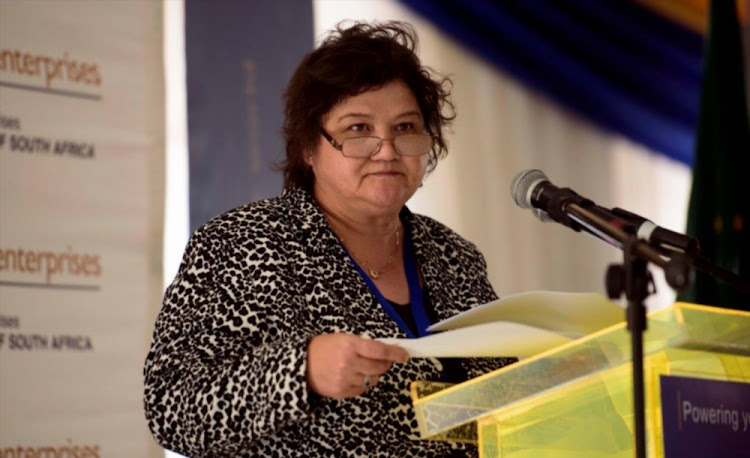 Last week‚ in an exclusive article‚ The Times revealed how the Guptas had paid for Davids’‚ or a woman allegedly purporting to be her‚ to stay at the luxury Oberoi Hotel in Dubai in December 2015.

She stayed at the hotel at the time a host of other government ministers‚ including mineral resources minister Mosebenzi Zwane‚ were staying at the hotel.

The payments were discovered in a trove of leaked family business emails.

Davids has continuously denied that the family paid for her stay and has insisted that she covered her own costs.

Last week when responding to enquiries from The Times‚ Davids said she and her then fiancé were en route to Portugal when she fell ill in the United Arab Emirates. She said she had discovered that she was pregnant and turned around with her fiance and returned to South Africa.

Davids has so far been unable to explain who would have impersonated her and why‚ or why her alleged impersonator would have ordered a limo to visit the Guptas at their luxury Dubai home.

Brown said in a statement on Wednesday morning that she had asked Davids to "step down" following allegations related to the email leaks.

“This past week I have been confronted by allegations against Davids. In the interest of fairness I asked Davids to respond to these allegations.

“I was satisfied with her responses but I felt that the continuous allegations against Davids could compromise the legitimacy of my office.

“My decision is not an expression of guilt on the part of Davids. However‚ it is important that my office is above reproach."

Davids is the latest in a string of officials under suspension pending inquiries into allegations contained in the trove of leaked Gupta emails.

Last week‚ Eskom suspended its chief financial officer Anoj Singh on a precautionary basis – under pressure from lenders‚ pending the outcome of a forensic investigation.

Singh’s involvement in major deals involving the Gupta family could be traced through evidence in the leaked emails‚ The Times has reported previously. Most notably‚ Singh was directly sent a Trillian Capital Partners invoice for R30.6-million on February 11‚ 2016‚ two months before the company was registered on Eskom’s supplier database.

Trillian‚ which announced recently that it and key Gupta lieutenant Salim Essa had parted ways‚ sent the invoice again on April 14 - it was paid the same day‚ coincidentally‚ the day payment was due for the Gupta’s purchase of Optimum Coal.

Singh also travelled to Dubai five times between June 6‚ 2014 and December 24‚ 2015 where he stayed at the five-star Oberoi Hotel on each occasion‚ all on the Gupta’s tab.

Eskom executives last month finally admitted‚ after months of public denials‚ that it had paid Trillian a total of R495-million‚ without a contract being in place.

In June‚ former Eskom board chairman Ben Ngubane resigned suddenly‚ a move that observers perceived as a first sign of possible cracks within the Gupta empire as key figures in the state capture saga started to feel the heat amid continuing revelations from the leaked Gupta e-mails.

However Ngubane‚ whose resignation followed the bizarre departure of former CEO Brian Molefe from Eskom‚ questioned why he should fear a parliamentary inquiry.

He told The Times: “I do not care of these things [sic]. If there is a case to answer I will answer. I have been before [to parliament] and answered questions. This inquiry and my relations with people would be the last reason I would resign. If you say I have a relation with every person I meet I would be in a lot of relationships."

UK PR group Bell Pottinger meanwhile has dismissed the lead partner involved‚ in addition to suspending another partner and two employees‚ over accusations that it supported and aided campaigns to stir up racial division in South Africa through its work for Gupta-owned Oakbay Capital.

Software giant SAP has also suspended its SA staff and launched an investigation into allegations that a Gupta-linked company CAD House‚ received multi-million rand kickbacks for helping it secure contracts with Transnet.

In July‚ the scandal surrounding the Gupta family also led to the resignation of Airports Company SA (Acsa) board member John Lamola.

Business Day obtained a copy of Lamola’s resignation letter‚ which was sent to Transport Minister Joe Maswanganyi. He stated he wanted to resign from the Acsa board after he learned from a report in the Sunday Times that the Guptas had allegedly played a role in his appointment.

Lamola’s name was on a list of five names to be placed on the Acsa board that the Guptas allegedly gave to an adviser of former transport minister Ben Martins in 2012.

Chwayita Mabude‚ one of the other names given to Martins‚ was removed from Eskom’s board of directors in a recent reshuffle by Brown. The Financial Mail reported Mabude had been there since June 2011‚ making her the longest-serving member of Eskom’s board.

This was Mabude’s second dismissal from the board of a key state-owned company this year: On February 20‚ former transport minister Dipuo Peters fired Mabude‚ along with three other directors‚ from the board of Acsa. A month later‚ however‚ Peters was removed in President Jacob Zuma’s cabinet reshuffle. Peters’ replacement as transport minister‚ Joe Maswanganyi‚ reinstated Mabude and the other three directors on May 31. Mabude’s presence on the Acsa board is the subject of a court case‚ in which the Economic Freedom Fighters (EFF) has applied to the high court to interdict the board from considering a R51-billion infrastructure project.

The FM report stated the Guptas are said to be eyeing a R3.5-billion contract to upgrade the runway of the Cape Town International Airport.