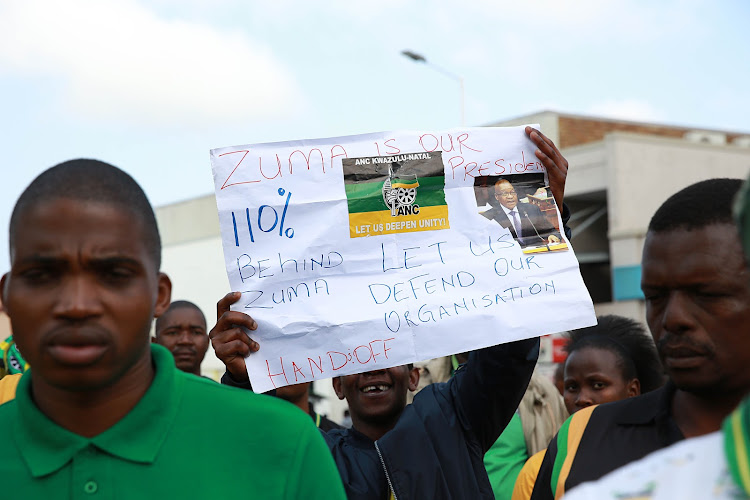 August 8, 2017. ANC supporters during a march in KwaDukuza against to vote of no confidence to President Jacob Zuma.
Image: THULI DLAMINI

President Jacob Zuma may have narrowly escaped defeat in an unprecedented secret poll in the vote on a motion of no confidence against him on Tuesday‚ but the ANC in KwaZulu-Natal has described his victory as “a humiliating defeat for imperial forces".

“Once again imperialism and the imperial forces coalescing with their domestic stooges‚ represented by a coalition of opposition parties‚ have suffered a humiliating defeat‚” said the ANC in a statement.

The party reiterated that the motion of no confidence against Zuma was aimed at dislodging the ANC from power.

“We knew from the beginning that cadres of the movement deployed in the national assembly can neither be subjected nor succumb to the directive of the enemies of our revolution‚” said the ANC. “We salute ANC cadres deployed to the national assembly for remaining firmly loyal to the party line and the political discipline of their organisation.”

But the ANC in the province was mum on those ANC MPs who voted with the opposition to oust Zuma.

The motion was defeated after 198 MPs voted against it‚ while 177 voted for Zuma to go‚ with nine abstentions. But Zuma’s narrow escape has bolstered opposition parties who were delighted at the number of ANC MPs who voted with them.

The ANC in KZN hailed Zuma and his generation for being loyal the party and its struggle for over six decades.

It was always going to be about numbers: how many votes in the ballot box; how many years left in power; how many dollars pouring into Dubai bank ...
Ideas
5 years ago

It was a narrow escape for President Jacob Zuma. Afterwards‚ both sides said they had won.
Opinion & Analysis
5 years ago