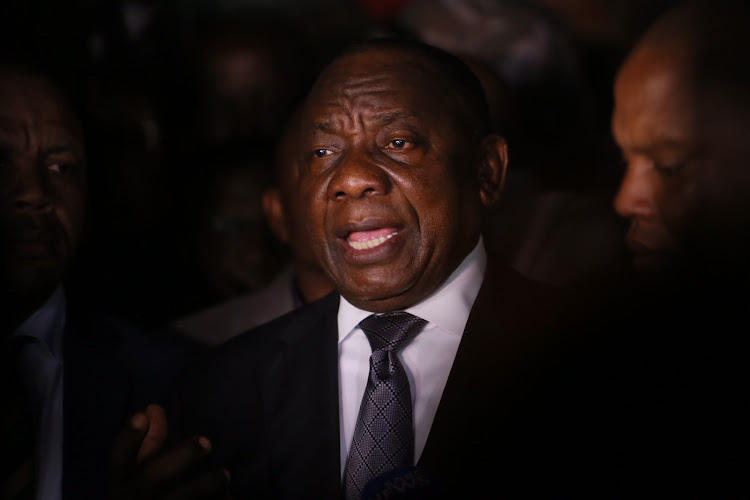 President Cyril Ramaphosa speaks outside the home of the late Winnie Madikizela-Mandela in Soweto on April 2 2018.
Image: ALON SKUY

As supporters sang and danced outside the Soweto home of Winnie Madikizela-Mandela on Monday night‚ President Cyril Ramaphosa told those gathered that he and the ANC were mourning the death of the “mother of the nation”.

“We are mourning the death of the mother of our nation‚ who departed this afternoon‚” Ramaphosa said. “Many of our people just cannot believe she has departed; they were still glowing in her continued presence and life‚ particularly after she seemed to have gotten over the health challenges that she was going through.”

Madikizela-Mandela died at Milpark Hospital in Johannesburg on Monday afternoon after a long illness that saw her hospitalised several times since January. She was 81.

Ramaphosa‚ surrounded by security‚ spoke of how Madikizela-Mandela - who he described as “one of the strongest women in our struggle” - had “suffered immensely” under the apartheid regime.

President Cyril Ramaphosa has praised the late Winnie Madikizela-Mandela for her determination and courage during the toughest times of apartheid.
Politics
3 years ago

She had been banished to live in Brandfort in the Free State‚ kept in solitary confinement for more than a year and was imprisoned on multiple occasions‚ each time being separated from her children.

“Notwithstanding all this‚ she remained strong‚ she remained determined‚ she was courageous and‚ in many ways‚ she was also very stubborn - stubborn on behalf of our people because she knew that out of her stubborn disposition she would be able to inspire million of South Africans.”

“We grew up watching how she was conducting herself as she resisted the worst type of terrible torture from the apartheid regime. She was not only an inspiration‚ but she also touched the lives of many millions of South Africans during the dark days of apartheid‚” he said.

“When the ANC was banned‚ when our people were living under the jackboot of apartheid‚ she remained the sole voice of the democratic movement‚ she continued to show courage against all the terrible forms of intimidation that were levelled against her and her movement.”

South African President Cyril Ramaphosa sent his condolences to the Madikizela and the Mandela families after Winnie Madikizela-Mandela died on Monday afternoon in Johannesburg.

Ramaphosa said that Madikizela-Mandela also had a great impact internationally and would be fondly remembered as a gallant and brave person‚ as she was a beacon for the entire world to look to.

“Winnie Mandela leaves a huge legacy. As we say in African culture‚ ‘A giant tree has fallen.’ And this is the Winnie Mandela tree that provided shade for the people of SA. For the people who were in the struggle‚ they used to run under this tree for refuge‚ for shade and for security. That is what Winnie Mandela provided for the millions of people in our country. We are sad that this tree has finally fallen.”

Nobel peace laureate and archbishop emeritus Desmond Tutu has joined the nation in mourning the death the death of struggle stalwart Winnie ...
News
3 years ago

Nomzamo Winifred Madikizela-Mandela has died at the age of 81. We look back at moments of her life in pictures.
Politics
3 years ago

It is with profound sadness that we inform the public that Mrs Winnie Madikizela-Mandela passed away at the Netcare Milpark Hospital‚ Johannesburg‚ ...
News
3 years ago