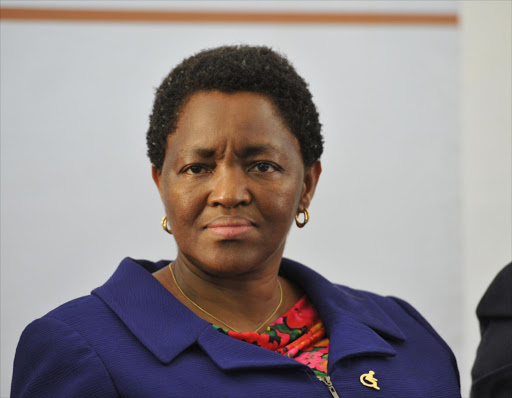 Bathabile Dlamini has resigned as an ANC MP just in time to receive a minister's pension instead of an MP's pension.
Image: Gallo Images / Foto24 / Charl Devenish

Former social development minister Bathabile Dlamini resigned as a member of parliament on Tuesday. In an eight-page long letter Dlamini lamented unfair treatment of women in the party, among other things.

The ANC's office of the chief whip on Monday confirmed Dlamini's resignation. Her exit from the National Assembly followed that of Susan Shabangu, Nomaindia Mfeketho, and Jeff Radebe over the past two weeks. Derek Hanekom's resignation came shortly after Dlamini's.

'I fight for women'

The former minister recently responded to President Cyril Ramaphosa's decision not to include her in his cabinet, and said getting elected into the president's cabinet is not about her, but all women.

DA: 'Dlamini must be charged'

In October last year, the DA gave Ramaphosa a few days to remove Dlamini from his cabinet and said it was planning to lay criminal charges against the former minister, whom the court found to have been negligent in the Sassa grants payments which put millions at risk of not receiving their grants. The party stated Dlamini was not fit to hold office.

The Democratic Alliance's call for Dlamini's dismissal by Ramaphosa after the grants debacle saw him defend his decision to keep her, regardless of public opinion that she should have been dismissed. She was instead moved to the post of minister in the presidency.

In his response, Ramaphosa said Dlamini had not been disqualified from being a member of his cabinet even after the findings from the Bernard Ngoepe inquiry at the time.

President Cyril Ramaphosa says his decision to keep minister in the presidency responsible for women Bathabile Dlamini was not done “in bad faith or ...
Politics
3 years ago

Dlamini addressed women and youths during the department of rural development and land reform’s dialogue last year, in which she lamented that the ANC is a man's club. She said although men and women work closely in the party, some issues which affect women directly were considered apolitical.

She was speaking about land reform and warned that if women are not careful, their fates regarding the matter would be shaped by men. "If we are not careful‚ everything that is discussed [around land reform] as we are speaking‚ is going to be shaped through the discussions of men.”

However in 2017 the same ANCWL chairperson defended the organisation's decision to send a delegation with six men to the party's policy conference.

"Sometimes we lose debates because we become emotional, so now we want experts to argue," the self-professed champion of women's rights managed to state as the reason.

'Women in the ANC are on their own' - Bathabile Dlamini

Minister of women in the presidency Bathabile Dlamini on Thursday criticised patriarchy within the ANC‚ saying women in the ANC were “on their own”.
Politics
3 years ago

Mzansi weighs in on Bathabile Dlamini's resignation: 'blaming others, not taking responsibility'

ANC Women's League president Bathabile Dlamini is the latest senior party member to dominate conversations on Twitter as the public reacts to her ...
Politics
2 years ago

ANC Women’s League president Bathabile Dlamini said she was made a scapegoat and an easy target as she resigned as a member of parliament on Tuesday.
Politics
2 years ago

Seven MPs who have already resigned from parliament: all the details

More members are expected to resign.
Politics
2 years ago