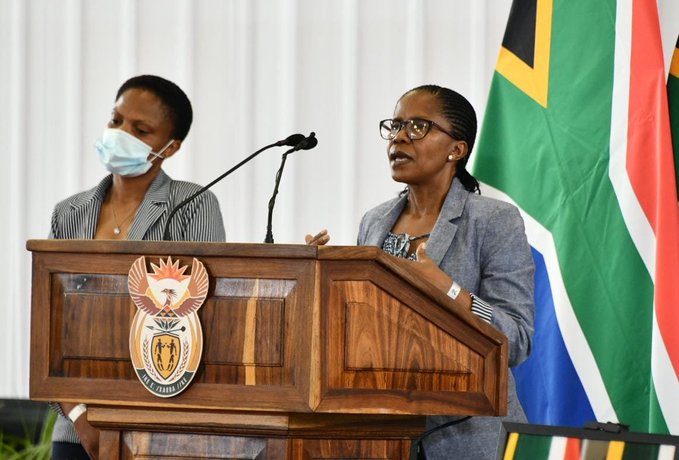 Mavis Mahlakoane, a nurse from Johannesburg's Milpark Hospital, attended to former minister in the presidency Jackson Mthembu before his death.
Image: SA Government/Twitter

A nurse who looked after the late minister Jackson Mthembu while he was in hospital described him as a “calm” and “humble soul”.

“What a calm soul. We didn’t nurse a 'do you know who I am person’. He was humble,” said Mavis Mahlakoane, who works at Johannesburg's Millpark hospital. Mthembu died of Covid-19 complications on Thursday.

She said when she offered Mthembu breakfast on Wednesday, a day after he was admitted to hospital, he told her that his wife would bring food.

“We had a conversation that day as if we had known each other for a long time.

“He called me. He opened his phone and showed me one of his videos. It was Bheki Cele dancing. He said when he left the hospital he would show him how to dance.”

Mahlakoane said Mthembu did not want her to call him minister.

“He said you can pick any name you want to call me, but don’t call me minister.

“Around 5pm, when I was preparing his medication, he asked for his phone. He said, 'I want to call my true friend.' He said 'Cyril [Ramaphosa] is the man who knows me better than anyone',” Mahlakoane said.

When the wife of late minister in the presidency Jackson Mthembu saw President Cyril Ramaphosa, who was waiting for her outside of the Roman Catholic ...
Politics
1 year ago

She said Mthembu had asked her to pray with him.

“He said he was struggling that day. He said the oxygen was cold. He complained of his throat being sore and cold. I made him rooibos.”

Mthembu, according to Mahlakoane, kept saying Ramaphosa would be disappointed. She did not understand what he meant.

The death of minister in the presidency Jackson Mthembu has reminded South Africans that we have more in common than we would like to believe, ...
Politics
1 year ago

“Within a wink of an eye, his sats [oxygen saturation] dropped. I asked him to put on his oxygen. The doctor came and said he would put him on an NIV machine.

“He said, ‘no this is uncomfortable’ ... We intubated Mthembu.”

She said Mthembu’s health had then deteriorated further. “We tried. All the doctors came. We resuscitated him ...," she said.

“We may all have our plans, but God has the last word.” - Mama Mavis Mahlakoane, a nurse from Milpark Hospital was the nurse who attended to Minister Mthembu before his passing. #RIPJacksonMthembu pic.twitter.com/pzePfbkJto

Orlando Pirates have joined those mourning the death of senior ANC member and minister in the presidency Jackson Mthembu.
Sport
1 year ago