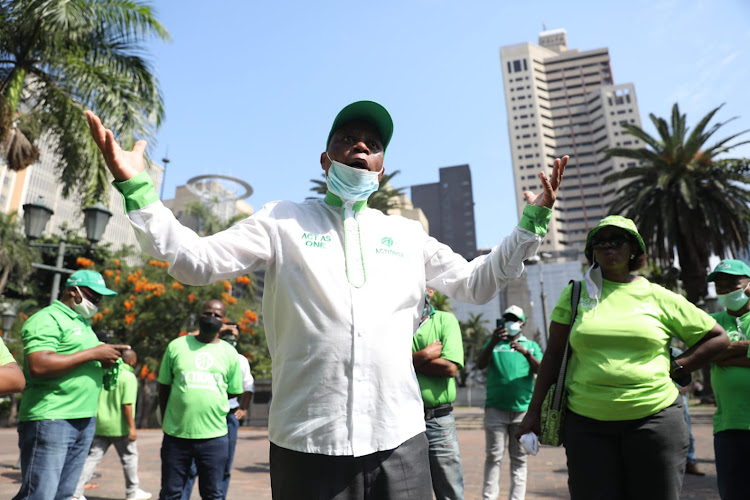 Herman Mashaba has set his sights on yet another metro, eThekwini, where he is willing to work with all political parties, including the DA, against the ANC.

On Thursday Mashaba announced outside the Durban City Hall that Action SA will — in addition to Johannesburg, Tshwane and Ekurhuleni — also contest for power in eThekwini.

“Our condition of participation in any municipality is on the basis of us bringing the ANC to under 50%. We are happy to work with other political parties to achieve that,” he said.

eThekwini municipality is governed by the ANC, with the DA being the official opposition. Asked if he would be willing to work with the DA in the metro, Mashaba said “we will work with everybody else at municipal government but not the ANC”.

Mashaba went on a three-month consultative campaign across SA, with a focus on Gauteng before establishing Action SA. It was during those consultations that he decided which municipalities to contest. eThekwini was never on the list, however.

As Herman Mashaba's Action SA prepares to contest key metros in Gauteng and KwaZulu-Natal the party said it has received over 500 volunteer public ...
News
1 month ago

Johannesburg, where he was previously mayor under the DA, Tshwane metro, where crumbling service delivery has often been attributed to instability brought on by coalitions, and Ekurhuleni, where the ANC governs with the help of the AIC, were top of his list.

However, Mashaba believes that Action SA stands a chance in eThekwini too, and through working with other political parties including the DA, the ANC can be removed from power.

When Mashaba left the DA, he said, “The DA no longer represents a party that is able to achieve what I desire most, a movement that can save South Africa, unseat the ANC and deliver one South Africa for all.”

According to Mashaba, the provincial chairperson, Makhosi Khoza, and the KZN team said the number of people who did not vote recently in eThekwini were mainly the youth, who are the biggest casualties of mismanagement in the city.

“Our campaign strategy is to attract those people who had already given up on voting and, through the People’s Dialogue, we reached people who gave us a mandate to start this political party. South Africans are just looking for an alternative.”

Johannesburg mayor Geoff Makhubo and former mayor Herman Mashaba were embroiled in another war of words.
Politics
3 weeks ago

ActionSA president Herman Mashaba wants the eThekwini municipality to be charged for the death of a Newlands mother, whose oxygen machine could not ...
News
4 weeks ago

Johannesburg mayor Geoff Makhubo has been criticised for his comments about former mayor Herman Mashaba's tenure.
News
2 months ago
Next Article