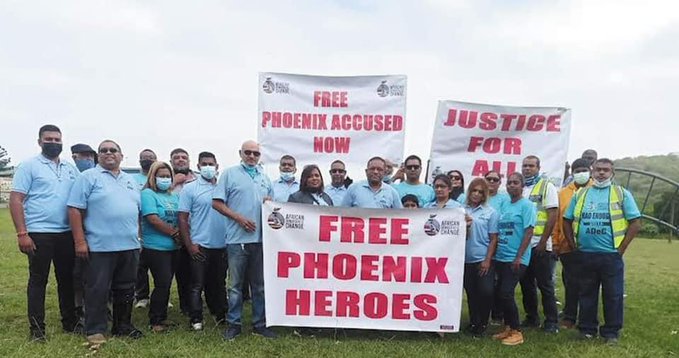 African Democratic Change president Visvin Reddy with supporters during a campaign call for several people arrested for killings during unrest and looting in July to be released on bail.
Image: Supplied

African Democratic Change (ADeC) leader Visvin Reddy has rubbished claims by the ANC which suggest his party was fuelling racial tensions with a recent campaign in the volatile Phoenix area in KwaZulu-Natal.

ANC spokesperson Nhlakanipho Ntombela said Reddy’s campaign on Wednesday, in which he and several supporters held banners calling for the “Phoenix heroes” to be freed, was “despicable provocation and dangerous race-baiting”.

He said the call for the release of those on trial for murders and other crimes was “insensitive”.

“This lumpen is stirring racial conflict between Africans and Indians in an already volatile area,” said Ntombela.

Police minister Bheki Cele said 36 people lost their lives in Phoenix — 30 of whom were shot — during unrest and rioting in Durban in July.

Phoenix brothers Dylan and Ned Govender and fellow resident Jeetendra Jaikissoon appeared in the Verulam magistrate’s court on Wednesday and on Friday in connection with the murder of an Amaoti resident in July.

Three Phoenix men who face murder charges after civil unrest in parts of KwaZulu-Natal last month have abandoned their application for bail.
News
2 months ago

Reddy has been a common feature at court when the accused have made appearances.

Ntombela said: “The ANC has demanded that those responsible for the murders in Phoenix face the full might of the law. We have observed with keen interest the proceedings under way in court.

“Those who are remanded in custody while the trials continue are being detained for sound reasons. For anyone to paint them as heroes or call for them to be freed is the height of insensitivity and plain stupidity.”

He said the ANC believes the campaign was designed as "“cheap attention-seeking by those campaigning for the local government elections”.

Reddy hit back by saying his party had a succession of motorcades since the start of the court appearances calling for justice to prevail.

“In the case of the murders that took place in Phoenix, those accused have been incarcerated for weeks without the option of bail. We have been in court and we have observed that in some of these cases there is insufficient or no evidence to link the accused with the murders.

“Many rely on social media messages and videos and are pronouncing guilt based on this. We state categorically that the ADeC seeks justice for all those killed and those found guilty must face the full might of the law.

“What we want is justice and for the court to do its work. We fully believe in the principle of innocence until proven guilty,” said Reddy.

He accused the ANC of trying to divert from critical issues instead of taking responsibility for its role in the riots and looting.

A KwaZulu-Natal political party leader has initiated an unorthodox method to ensure his candidates remain accountable to service delivery and the ...
Politics
3 weeks ago

The KwaZulu-Natal government wants to use sporting, arts and cultural events to address racial tension in the province.
News
1 month ago

A police task team member assigned to investigate civil unrest, violence and deaths in Phoenix revealed in the Verulam magistrate’s court on Tuesday ...
News
2 months ago

Scores of political, community and peace organisations joined the EFF in Phoenix on Thursday in a march against those involved in recent criminal ...
Politics
2 months ago