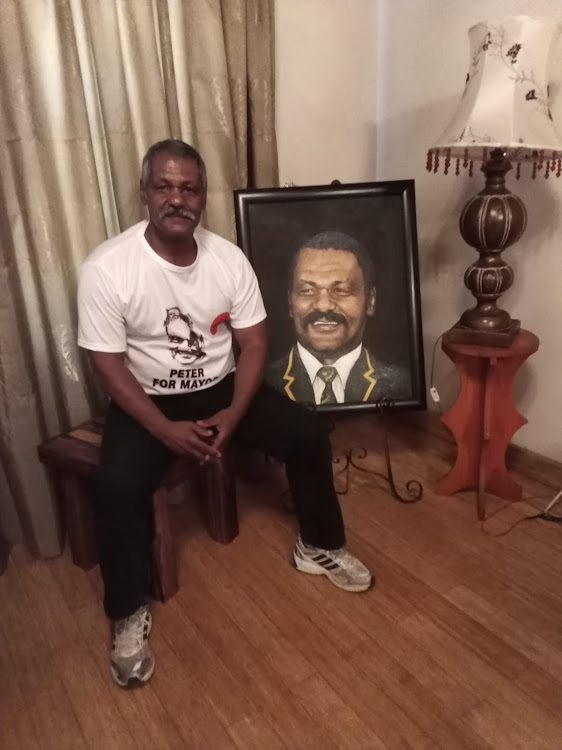 Peter de Villiers says he'll be tackled from all directions as he contests the Drakenstein mayor’s position.
Image: Philani Nombembe

De Villiers, 64, has thrown his hat into the ring in the contest for the Drakenstein mayor’s seat in the upcoming municipal elections. Pictures of De Villiers squaring up in boxing gloves are emblazoned on the Good party’s campaign posters lining the streets in Paarl. The former coach explained his political strategy to TimesLIVE  this week.

Using several analogies to describe his approach to politics, the former schoolteacher said there were a number of tricks picked up on the rugby field that he intends applying to politics.

De Villiers said the negative publicity he got while at the helm of SA’s national rugby team moulded him for the job he is angling for.

“Isn’t it how I was groomed for this job? I am going to be tackled from all directions. But the one thing about politics, as we know it now, it has never been meant to be what it is. We changed politics to a playing ground where we use the people’s lives as a ball,” he said.

“Politics is important to me because you don’t decide to be there, people decide — they vote you in.”

He traced his political consciousness to the 1976 uprisings.

“I was in matric and the stone-throwing and all those kind of things against the National Party, which didn’t grant us the opportunity to be human beings, opened my eyes,” he said.

“If you grew [up] during that era, you will understand that we stood on street corners and school yards talking politics and how bad the system treated us, where we wanted to be and how to get there. I became a teacher and I was very active in politics and then came 1994, and then my job was done. This was the result of all the fighting. We expected things to change.”

He is disappointed that “things haven’t changed in SA” since the advent of democracy.

“I saw it as a divine moment when the Good [Party] came to me ... about standing for the mayor's position. When Patricia de Lille started the party, I became a member. I was actually part of this whole thing. But I didn’t think I would become so active and stand for any position. But as we talked, I realised how one thing fits into the other and that I cannot discard the experiences that I have accumulated.”

And then he “took over” the interview.

“What we are doing here is politics,” he said. “How many interviews did I do when I was the Springboks' coach? I did one every day. I understand how journalists think and what they want out of you and who sent them and why they were sent. Peter De Villiers says he is unfazed by his opponents.
Image: Philani Nombembe

“I know that you didn’t come here because you wanted to talk to me. Somebody thought, ‘it is going to be a good story for our paper'. You don’t have control of what is going to be in the paper because if that man says, ‘no, no, leave that sentence out, let’s make this a smear campaign rather than an informative story’, that is going to happen,” he charged.

He said he had developed a thick skin.

“I don’t have a problem if they do it. What I have learnt about journalists is that if I am the target, they will write whatever they want. So whether it is good news or bad news, I am still relevant. Tell your boss I said this. The difference between me and you is that you went to study journalism and didn’t have to. I just picked it up as I go along.”

He said his Springbok job was a launch pad to bigger things.

De Villiers said if he gets the mayoral chain, he will enter the council chamber as if it were a rugby field.

“I am considered as one of the successful coaches of SA rugby,” he enthused.

“My strategy is simple. You put the structures in place and the players will look after the outcome. So whatever strategy they need to get me the outcome, I will give them because I can’t control the outcome. They can.

“The first thing you do in politics, which is what you do in rugby, is to listen to what the people’s needs are. The people who have problems will be able to solve their own problems if you build the structures around them. Everyone is unique.”

He said he does not pay attention to other political parties and their election strategies mean nothing to him.

“You don’t need to do that. Your opponents can’t control the outcome but you can control the way you play the game. If you can win the small contests, you may just win the big game too. But the one thing about opponents is that if you focus on them, you forget your own strengths.”

‘Don’t allow racists to speak on behalf of us’: Patricia de Lille takes aim at the DA

"The minority of racists, most of them you find in the DA. We should not allow those racists to speak on behalf of us," said De Lille.
Politics
3 months ago

He said though the council had received clean audits, the municipality seemed to be divided in two.

“There are the ones who live next to heaven and the other guys are living in hell. But it is the same audit and the same budget and the same decision makers.

“If you grew up in an environment where you were never hungry, then the decision made by that mindset is skewed against the poor. There are people who can’t answer a simple examination question because they don’t have data. Other people don’t need data because they have wi-fi in the car, outside the car and in the house. So the same guy who has to decide between buying electricity and buying food is the same guy who doesn’t have data. So this to me is politics.”

De Villiers said his honesty cost him his Springbok job.

“After the Springboks I coached the University of the Western Cape and Zimbabwe rugby teams and I also went to the Eastern Cape.

“It was a hell of a lot of roads that I had to travel. But it was all against the wishes of the bosses of rugby in SA. They didn’t want me back in rugby. I don’t think there was a place for honesty in rugby in SA and that is why they couldn’t handle me. I was too honest, open and too hard on stuff. That’s why there was no place for me.”

'It's colours, guys! Nice colours': Mbalula claps back at claims he used Zozi’s snap for electioneering

Mandela would be proud of me, says black FF+ candidate

Freedom Front Plus election campaigns will become festivals of song and dance if one of the party’s first black candidates has his way.
News
3 months ago