What you said: Will you observe the period of mourning for FW de Klerk this weekend? 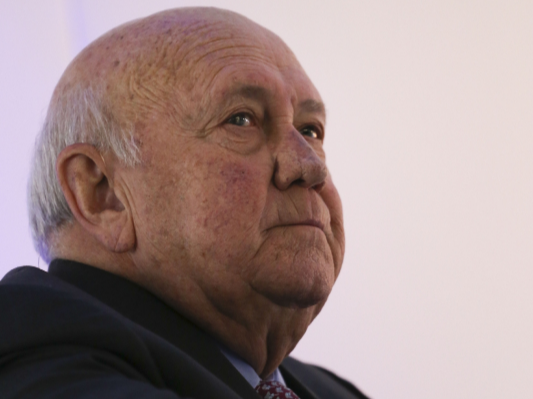 TimesLIVE readers have shared their thoughts on the period of mourning for former president FW de Klerk.

President Cyril Ramaphosa this week announced the national flag will be flown at half-mast from sunset on Wednesday until Sunday “as a mark of respect” for De Klerk.

De Klerk died last Thursday at his home in Cape Town at the age of 85, his foundation said.

“It is with the deepest sadness that the FW de Klerk Foundation must announce that former president FW de Klerk died peacefully at his home in Fresnaye earlier this morning [Thursday] following his struggle against mesothelioma cancer.”

President Cyril Ramaphosa has declared the national flag be flown at half-mast from Wednesday as a mark of respect for late former president FW de ...
Politics
6 months ago

De Klerk's legacy has been the subject of fierce debate on social media, with many suggesting they would not participate in the period of mourning and may disrupt a state funeral or memorial service for the former leader.

Controversial sacked ANC staffer Carl Niehaus was among those who weighed in, saying Ramaphosa should be ashamed of himself for making such an announcement.

But a poll by TimesLIVE found that most readers will observe the period of mourning for De Klerk: 55% said De Klerk “played a big part in bringing about a democratic SA” and would be mourned.

Some 34% said the late apartheid president meant nothing to them and they would not mourn him, while 11% cheekily asked if he would have mourned for them?

On social media, opinions were split.

“I won't be mourning, simply because I didn't have any personal relationship with him. I also won't be mourning any other former, present or future dead presidents, but it doesn't mean that I'm disrespectful. They do leave families and friends behind that cared for them deeply and I respect that,” wrote Marinda Wilmans.

Debbie Clifford joked she was instead “mourning the loss of our electricity and water supply”.

JONATHAN JANSEN | Calculating to the end, FW botched his last chance to free himself

He could have atoned for apartheid by admitting it was a crime and pleading for forgiveness. He didn’t
Opinion & Analysis
6 months ago

The death of apartheid’s last president Frederik Willem de Klerk, brought into sharp relief the vital and urgent need for the ANC to return to its ...
Opinion & Analysis
6 months ago

Former president FW de Klerk's family has announced it will hold a private funeral for him.
Politics
6 months ago