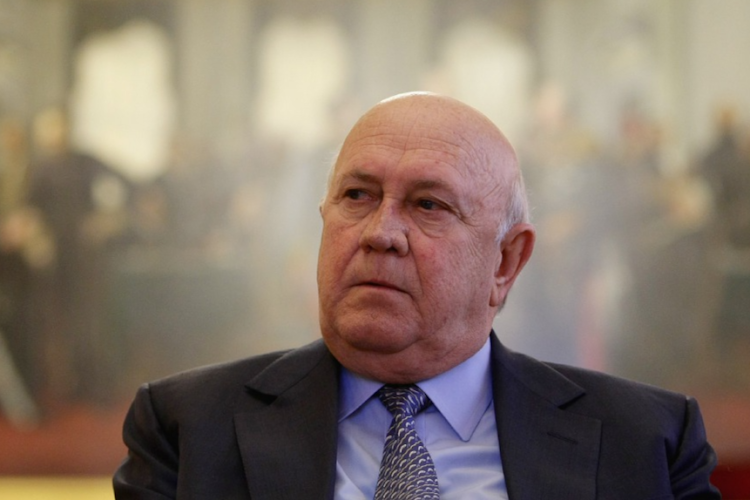 Frederik Willem de Klerk was a beneficiary of privileges enjoyed by former presidents and deputies after he voluntarily stepped down as second deputy president of democratic SA in May 1996.
Image: Andreas Rentz/WireImage

The death of apartheid’s last president Frederik Willem de Klerk brought into sharp relief the vital and urgent need for the ANC to return to its core business, namely doing politics.

A tempestuous debate about De Klerk’s eligibility or otherwise for a state funeral continues, albeit with the notable absence of the governing party. On the one hand are those who hold that for his leadership of the apartheid project and continued justification of the evil system after 1994, the state should have nothing to do with his funeral.

On the other are those who point out that unless their families expressly state otherwise, government policy enjoins the state to inter serving and former heads of State.

It is within these policy prescripts that De Klerk was a beneficiary of privileges enjoyed by former presidents and deputies after he voluntarily stepped down as second deputy president of democratic SA in May 1996.

More substantially beyond the law, and his disreputable past notwithstanding, De Klerk represents a social base which cannot be wished away in the same way it was sheer folly for the erstwhile National Party to imagine it could subjugate over the social base of the ANC to eternity.

To varying degrees, these fellow South Africans see a leader and hero in De Klerk even as they may, like right wing singer and writer Steve Hofmeyr, find aspects of his political curriculum vitae objectionable in their point of view.

From the late 1980s until the mid-1990s, consensus within the ranks of the National Liberation Movement (NLM) held that the apartheid regime had not defeated the NLM and  neither had the latter defeated the regime.

FW de Klerk struggles to keep his ‘halo’ in check

The last president of the apartheid era, FW de Klerk, died after a battle with cancer on November 11, leaving behind a complicated legacy.
Opinion & Analysis
1 week ago

The sincerity of FW de Klerk's deathbed apology will ring hollow for many who were the victims of the violence that the former president maintained ...
Opinion & Analysis
1 week ago

This gave rise to a political posture which informed the political settlement ultimately conceived in 1994. In the post-apartheid era, the imperative to build a united and cohesive nation requires that political players across the divide see the cocktail of discourse of the current era for what it is — thoroughly unhelpful. SA is simply too diverse a society, politically and otherwise, for any quarter to ignore its plurality.

Those who enter politics without appreciating this vital political fact about SA are more of a potential problem than an asset to their constituencies and the country more broadly. Deliberately or inadvertently, they are likely to exacerbate political cleavages, which in turn further stunt the growth prospects of the post-apartheid project.

Needless to add that failure to manage diversity has been one of the most troubling fault lines of the post-colonial African experience. As the last to attain our liberation, SA dares not tread this perilous path.

We should perhaps start by scrutinising current attempts to cobble together coalitions in the metros lest they fall prey to predatory politico-business elite pacts.

The divisive rhetoric which muddies the waters render it difficult if not altogether impossible for South Africans to discern their common destiny.

The ANC has a responsibility to lead the people of SA as a whole, progressives and non-progressives alike. Leadership also involves reminding each side of the fact that they do not in habit the territorial space called SA alone.

Those who hold different political opinions also have a right to exist in a rules-based system that must never be applied with party political lenses. De Klerk died two days after the former commander of Amabutho, Zihogo “Mgilija” Nhleko.

In the grand scheme of the dark arts apartheid politics, De Klerk was arguably Mgilija’s ultimate commander during the late 1980s and mid-1990s. But we are being invited to embrace Mgilija as a hero by means of a Polokwanesque narrative steeped in 100% ethnic politics pretending to be ANC.

As for threats to destabilise the proceedings in the event the state took responsibility for De Klerk’s funeral, we have to inquire seriously into the cultural and political purview from whence this kind of barbarism comes.

As a people, we are completely unfamiliar with such methods of protest. Who are these “leaders” in political terms? It is patently evident that by absenting itself from the debate about De Klerk’s passing — and many other issues of the day which require progressive political clarification — the ANC has been ceding space to populist adventurists who profit from projecting themselves as men and women of the people when they are nothing but charlatans and confidence tricksters.

One thing is for sure — the ANC must jerk up its communications enterprise. The current corps is way too mediocre for the complex task at hand. Of critical importance, the movement must return to its core business of doing politics. If it is to succeed, the vitally important process of renewal demands no less.

Former president FW de Klerk's family has announced it will hold a private funeral for him.
Politics
1 week ago

De Klerk: a complex man with a self-serving streak

Though his final video may have been an attempt to dominate the narrative about his life, it changed little, notes the writer.
Opinion & Analysis
1 week ago

Those who pleaded with him for the truth -- in vain -- or who were impressed with his grand gesture of February 1990 recall the complicated legacy of ...
Opinion & Analysis
1 week ago

The ANC's way with words brings a quiet joy

I promised the editor I would not mention FW de Klerk in this column today but the ANC leaves me no choice. Its expression of regret at his ...
Opinion & Analysis
1 week ago

'He was a careful pragmatist': The many faces of FW de Klerk

The last apartheid president went from being an apartheid enforcer to a peacemaker. But, writes Chris Barron, his legacy is stained by his refusal to ...
Opinion & Analysis
1 week ago