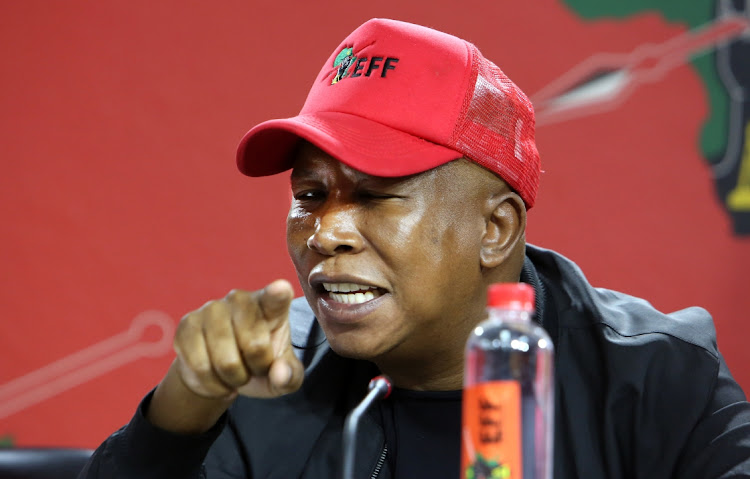 EFF leader Julius Malema says his party will push for the ANC's RET forces in KwaZulu-Natal to vote with the red berets against the ruling party.
Image: Alon Skuy

The EFF is on a mission to infiltrate the ANC in KwaZulu-Natal by capitalising on the governing party’s internal factions.

EFF leader Julius Malema revealed on Tuesday that the party in KwaZulu-Natal municipalities will approach the ANC’s “RET forces” faction to vote with them.

Malema said this as coalition arrangements across the country appear to be on the verge of collapse owing to disagreements in the City of Johannesburg.

Getting into bed with the ANC RET faction is an opportune moment to “upset the situation” for the EFF, which has been voting with everyone but the ANC in all municipalities.

“Part of what we are going to do in KwaZulu-Natal municipalities is to talk to RET forces to vote with us,” said Malema.

EFF leader Julius Malema is addressing the media on Tuesday morning on decisions taken at their third national meeting.
Politics
6 months ago

“There are a lot of RET forces in those municipalities because there is no longer ANC there. It is RET and then there is CR [President Cyril Ramaphosa].

“Voting is a secret so we will talk to RET to vote with us to upset the situation.”

Malema attacked the IFP for refusing to vote for an EFF candidate to chair the municipal public accounts committee in the City of Johannesburg.

According to Malema, the IFP was not playing fair after the EFF voted for them and put them in power in many municipalities in KwaZulu-Natal.

It was for this reason, he said, that the IFP had no choice but to vote with the EFF in Johannesburg to secure a long-lasting collaboration between the parties.

Malema said: “The IFP cannot tell us they are being defied by their region in Johannesburg. They will have to fire those people and put in people who carry the party mandate.

“We are not interested in their internal affairs but we have given the IFP a lot and we will still give them a lot.”

“Having lost income from my previous deployment, I wish to announce I’ve found a new job as an Uber driver," joked the former Ekurhuleni mayor.
Politics
6 months ago

The labour department will conduct a series of hospitality inspections across the Western Cape this week to ensure businesses are following the ...
News
6 months ago

JUSTICE MALALA | Malema should be careful what he wishes for

How can the EFF leader support Robert Mugabe’s tyranny and then bemoan the number of Zimbabweans in SA?
Opinion & Analysis
6 months ago