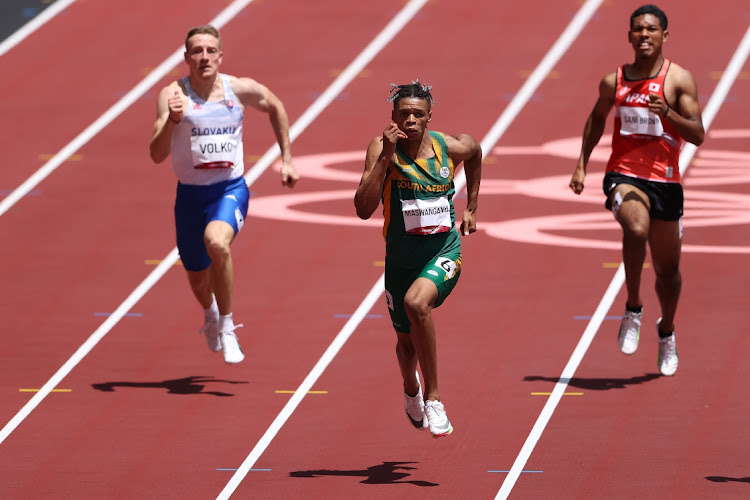 All three of SA’s sprinters advanced to the 200m semifinals at the Tokyo Olympics, though they’ll need to go faster if they want to be in the final on Wednesday. The semifinals start at 1.50pm on Tuesday.

Shaun Maswanganyi, one of SA’s three 100m semi-finalists at the weekend, qualified as the second-fastest in his heat in 20.58 sec and Anaso Jobodwana, a finalist at London 2012, progressed as the third-placed runner in his heat in 20.78.

Clarence Munyai, in the same heat as world champion Noah Lyles, was the quickest of the SA trio, and though he ended fourth in his race, his 20.49 season’s best got him through as a time qualifier.

In 2018 Munyai and Lyles shared the world lead of 19.69 for a few months before the American lowered it on his own. The South African, however,  has yet to dip under 20 seconds again.

At Rio 2016 none of SA’s 200m athletes, including Jobodwana and Munyai, made the semifinals.

The format in Tokyo is different, with the top three in each heat qualifying automatically with the three fastest times after that; in Rio they took the top two with the four fastest times.

“I think I can do better,” said Jobodwana, adding he had held back to save energy for the semifinals. “I’m very confident, I’ve been putting in the work so now it’s just time to put it together.”

US-based Maswanganyi said he also hadn't left everything on the track. “I took it nice and easy, I didn’t want to push it too hard.”

In the women’s javelin qualifying round, Jo-Ane van Dyk was eliminated after a best throw of 57.69m. In the same group, 40-year-old world record-holder Barbora Spotakova, a former two-time Olympic champion, failed to advance to the final after a best effort of 60.52.

The men’s 400m hurdles, once one of SA’s top track and field events, saw the world record lowered to an incredible 45.94 sec by Norway’s gold medallist Karsten Warholm.

The silver and bronze medallists went under 47 seconds and top five finishers were all inside the 47.66 SA record set by LJ van Zyl in 2011.

Team SA’s track and field squad has taken another blow with sprinter Gift Leotlela being ruled out of the rest of the Tokyo Olympics, leaving a ...
Sport
9 months ago

Akani Simbine had to settle for fourth in the men’s 100m at the Tokyo Olympics on Sunday night, missing out on the medals by four-hundredths of a ...
Sport
9 months ago