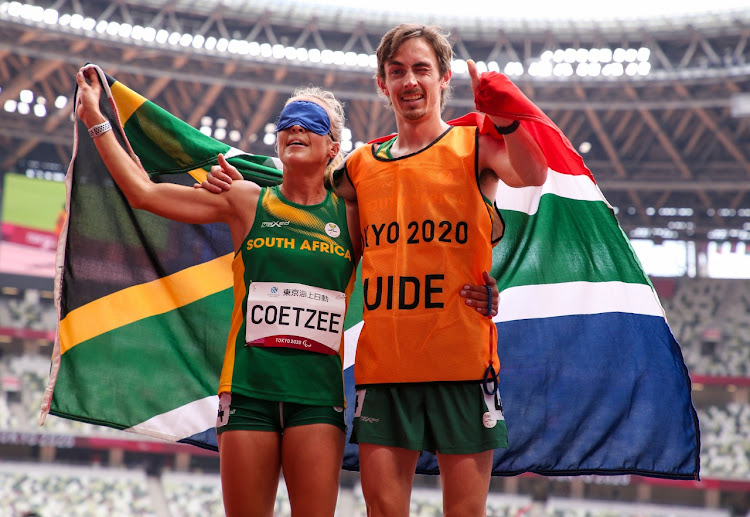 Louzanne Coetzee, the Rose of Bloemfontein, was “overwhelmed” at getting the Paralympic medal she had hoped for five years ago when she took silver in the 1,500m at the Tokyo Games on Monday.

“I can’t believe it,” said Coetzee, who was born visually impaired. “I have been competing for eight years and this is my first medal. I’m just overwhelmed.

“I couldn’t have asked for a better race, a better guide, better preparation, I’m just very thankful for how everything went down.”

Coetzee and her guide, Estean Badenhorst, were second, three-and-a-half seconds behind world champion Monica Rodriguez Saavedra of Mexico, who broke the world record with a blistering time of 4:37.40 secs.

Coetzee looked to have been saving a little in the tank for the final run on yet another hot and muggy morning at the Tokyo Olympic Stadium.

The 28-year-old went nine seconds faster than her heat, running a personal best of 4:40.96 secs.

Coetzee's tears told of the disappointment on her last Paralympics, when she was disqualified in the 1,500m after her guide Khothatso Mokone was deemed to have given her illegal assistance when he passed in front of her while overtaking another athlete.

“Khothatso turned his shoulder towards me when he was speaking to me and from the video on the referees’ side, it looked like he was pulling me,” remembered Coetzee. “Nobody wanted to appeal and help me appeal. If I had gone and appealed confidently, we could've won the appeal.

“So, I’ve learnt that if you believe in something, go for it. I won’t let that happen to me ever again. It wasn’t a great place to learn that at, but I’m glad I gained that experience. I think if I didn’t run that race and get disqualified, I wouldn’t have gained the experience I got.”

She and Badenhorst went to the front from the off on Monday, which was part of the plan, said her guide.

“To be a front-runner. We had trained on time trials against the clock, not on actual races as we haven’t had much opportunity to race a lot.

“The Mexican had come past and we knew that she could keep that pace up, so we were comfortable to stick behind her.”

There was some barging and leveraging for position with 800m to go, and Coetzee said she was “a little scared”.

“I knew I could trust Estean, but there was a lot of action going on and switching of places, which had made it a tougher race to run than had been the case in the heats. This was a bit scary, but Estean had warned me before that it might get like that, and I trusted him, so it all turned out fine.”

They went hard from the bell for the last lap, and could not be caught.

“There wasn’t much left in the tank at the end,” said Coetzee. “I’m the kind of runner who, if I could keep up with the gold medallist I would have. This is my limit — for now.”

She has another chance to add to her medal count in the marathon on Sunday.

On Monday, Dyan Buis got over his disappointment of missing out on the 100m final, but giving himself a big shot at defending the 400m title he won in Rio, by qualifying second- fastest for Tuesday’s final

Mpumelelo Mhlongo, who has reduced function in his legs, finished a strong fifth in the combined 100m class, breaking the Paralympic record for his class with an 11.03 secs, just behind Johnnie Peacock, the double Paralympic champion from Rio and London.

Puseletso Mabote had to have his right leg amputated above the knee when he was five and has shown that at 16 he is one for the future with seventh in his 100m final.

Philippa Johnson-Dwyer finished eighth in the dressage individual freestyle test (grade IV), a triumph after a 2020 in which she could not ride a horse for seven months due to open-heart surgery and cancer.

Shaun Anderson was “gutted” after losing a sudden-death 9-6 shoot-out to Helcio Luiz of Brazil in the final-eight round of the archery competition.

Day three came and went without a medal for South Africa in sweltering temperatures at the Tokyo Paralympics‚ but records were broken‚ personal bests ...
Sport
11 months ago

There were many people Ntando Mahlangu wanted to thank for his gold medal in the long jump on Saturday night, but he took the time to pay a special ...
Sport
11 months ago

Ntando Mahlangu planning a surprise at the Paralympics: 'I have done something special'

At the 2016 Paralympics in Rio, Ntando Mahlangu, then just 14, bounced with giddy excitement on the podium on the two prosthetic legs that had not ...
Sport
11 months ago

Day one of the Tokyo 2020 Paralympics gets under way

After the pomp, emotion and music that filled the empty stadium for the opening ceremony of the Tokyo 2020 Paralympics had died away, an accomplished ...
Sport
11 months ago

As he walked around the Olympic stadium during the Tokyo 2020 Paralympics opening ceremony held under a full moon on Tuesday night, Hendrik van der ...
Sport
11 months ago