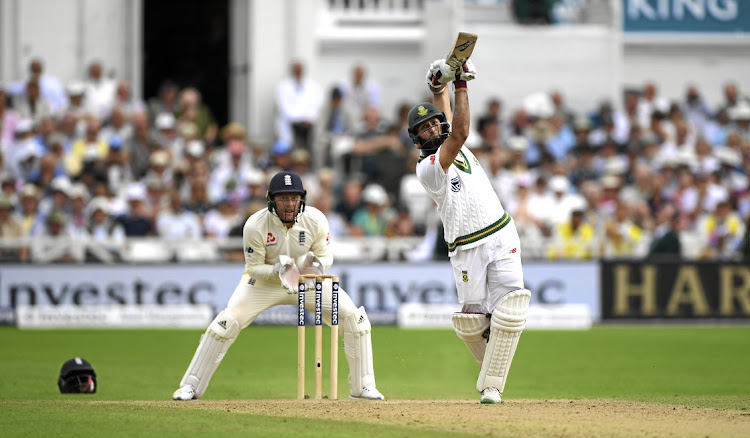 Hashim Amla dances down the wicket to hit Liam Dawson for four runs during day three of the second Test between England and South Africa, at Trent Bridge, Nottingham, yesterday. The wicketkeeper is Jonathan Bairstow.
Image: GETTY IMAGES

“I’ve got the same name‚” Hashim Amla said with a twinkle in his eye at The Oval on Tuesday after he was asked whether he is as good a player as he was five years ago‚ when the original test ground’s stately red-roofed pavilion and the nearby skeletal steel gasholder served as the backdrop for his finest innings.

Amla’s undefeated 311 in South Africa’s first innings of that series set the tone — and silenced sniping from the more jingoistic sections of the English press — for what became a 2-0 triumph that took the visitors to the top of the test rankings.

But it’s not the longest by a South African. That tired honour belongs to Gary Kirsten‚ who took 88 more minutes to make 275 against New Zealand at Kingsmead in December 1999.

Former India captain and batting superstar Rahul Dravid has suggested that time away from the game may be beneficial for underperforming Proteas ...
Sport
4 years ago

So‚ did Amla fancy reeling in that record?

“I’ve trained as hard as I can train‚” he said.

“The rest of it‚ whether the scores come on the board or not‚ is about applying yourself.”

That Amla will apply himself when England and South Africa clash in the third test at The Oval on Thursday is not in question.

But whether he has retained what’s required to score what remains South Africa’s only triple century is a more complicated issue.

In his 75 innings since his last trip to The Oval in test whites Amla has scored 11 centuries‚ among them 196 against Australia in Perth in November 2012 and 208 against West Indies in Centurion in December 2014‚ and he averages 48.31.

If anything that says Amla is a better player now‚ but there’s not a lot in it.

South Africa will be without JP Duminy for the rest of their test series in England.
Sport
4 years ago

Another argument is that he has faded a touch‚ and the evidence is the fact that he has scored only a single century in his previous 22 completed innings.

Not that anyone who saw Amla in 2012 has forgotten what he can do‚ although the man himself has a different recollection.

“I remember just trying to bat as long as I can and thankfully I did‚” he said.

“The lasting memory was that we were bowling on the first day and England were in a good position [on 267/3 at stumps] and the way we came back the next day to bowl them out [for 385]‚ that was the turning point.

“The fight we showed‚ that was the lasting memory.”

Besides five years is a long time …

“I find that with things that happened in the past‚ generally‚ if you linger on it too long it becomes more of a distraction than anything else.”

What do you do with yourself when you have nine days off?

Tell you what, let’s bugger off to Scotland and do some fishing. Or to Cornwall, where they say the surfing is decent. Camping, anybody?
Sport
4 years ago

Kagiso Rabada will be in no hurry to revisit the recent past.

He was banned for the second test at Trent Bridge after being docked a fourth demerit point for telling Ben Stokes to “fuck off” after dismissing him at Lord’s.

Rabada will be back at The Oval‚ probably in place of Duanne Olivier.

Might the fast bowler have to put out some of his fire to help him stay on the field in future?

“We’ve always allowed ‘KG’ to be ‘KG’ and enjoy his bowling‚” Amla said.

“That's how he enjoys it — by being fiery and having great intensity.

“We really hope he doesn’t get banned again‚ but we want him to bowl with the same fiery nature he has.”

Amla and Rabada will be key to South Africa’s plans to take a great leap forward in a series locked at 1-1 after emphatic victories at Lord’s and Trent Bridge.

So‚ were South Africa on the up considering they won by 340 runs in Nottingham?

“You can’t read too much into it‚” Amla said.

It’s OK‚ ‘Hash’. Unlike yours‚ the name of the England captain has changed.