Proteas' crash came fast to the slow men in Galle 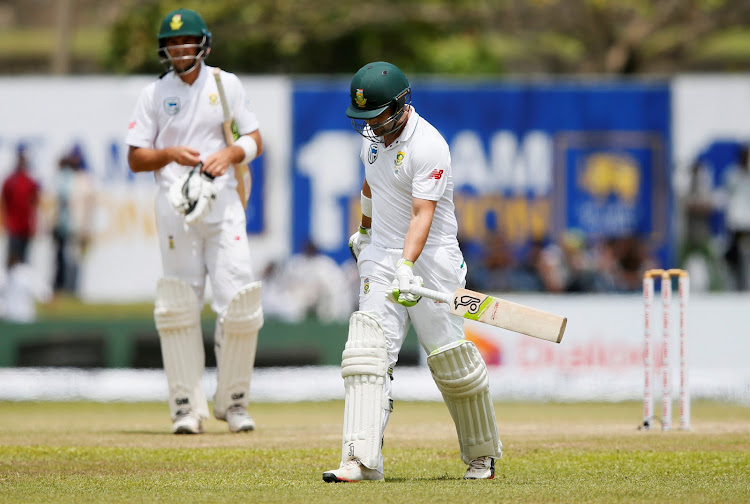 South Africa's Dean Elgar (R) walks off the field after his dismissal by Sri Lanka's Dilruwan Perera (not pictured) during the first test in Galle, Sri Lanka on July 14, 2018.
Image: REUTERS/Dinuka Liyanawatte

Somewhere during South Africa’s implosion amid a myriad small explosions of dust on Galle’s parched pitch on Saturday‚ the strains of “Despacito” oozed out of the low-slung ground’s public address system.

You needed a smidgen of Spanish to get the joke‚ which possibly was accidental: “despacito” translates to “slowly”.

Nothing happened slowly on the third day of the first Test.

Except‚ that is‚ the bowling — by Rangana Herath‚ Dilruwan Perera and Lakshan Sandakan‚ spinners all‚ and the architects of South Africa’s demolition by 278 runs 15 minutes before tea.

The visitors’ second innings was done and‚ yes‚ dusted in 28.5 overs — their shortest innings on the subcontinent — in which they were dismissed for 73‚ their lowest total in the 254 Tests they have played since readmission and their 11th lowest in 426 matches overall.

Perera‚ the off-spinner‚ took a career-best 6/32 to complete a match bag of 10/78. In a team where bowlers have delivered 22 hauls of more than 10 wickets — 21 of them by Muttiah Muralitharan or Herath‚ the other by Chaminda Vaas — Perera’s effort ranked 23rd on the honour role.

Left-armer Herath claimed five wickets in the game‚ which took him to 423 in his career. Or two more than Shaun Pollock.

“Now I’m in the departure lounge‚” Pollock said on commentary when the list of all-time leading wicket-takers appeared on screen and showed Herath had bumped him down to 10th place.

Another joke: Herath’s three wickets on Saturday meant he stole some of the thunder from Dale Steyn‚ who had Sandakan caught at point to end Sri Lanka’s second innings earlier on Saturday and draw level with Pollock’s career total of 421.

In a sense‚ then‚ Herath has broken Pollock’s record before Steyn.

Not a happy birthday for Faf du Plessis

What would you want for your 34th birthday? Not your team’s lowest total in Sri Lanka‚ nor to be dismissed by the only seamer in the home side’s ...
Sport
3 years ago

Besides Herath and Perera‚ Sandakan was the only bowler Sri Lanka required on Saturday. The left-arm wrist spinner sent down only five deliveries‚ but that was all he needed to trap Tabraiz Shamsi in front with a googly to end the match.

Vernon Philander’s unbeaten 22 was the highest score in an innings in which Aiden Markram and Quinton de Kock were the only other players in double figures‚ and in which no-one faced 50 balls.

About the best thing you could say about South Africa’s tentative‚ clumsy‚ inept batting on a standard subcontinental surface was that only Hashim Amla and Kagiso Rabada were dismissed for ducks.

Coming off more than 14 weeks without playing a Test‚ and with just 73.5 overs worth of batting acclimatisation behind them in a tour match in Colombo‚ were the South Africans under-cooked?

“You always want to put in as much preparation as you can‚ but no matter how much you train the quality that you’re going to get in the middle of the spinners isn’t something that you can practise in the nets‚” Faf du Plessis told a television interviewer.

“As much as you hit balls — and the guys have hit a lot of balls leading up to this series — the quality of the spin and‚ in this Test match‚ how well they controlled things was fantastic.”

With the second Test in Colombo starting on Friday‚ there is no time for South Africa to do any of the required repair work “despacito”.

Even Justin Bieber could have told them that.

Former Proteas wicketkeeper Dave Richardson has confirmed that he will step down as chief executive of the International Cricket Council (ICC) after ...
Sport
3 years ago

You would be forgiven for thinking Faf du Plessis was a poacher turned gamekeeper after his comments on ball-tampering at a press conference in Cape ...
Sport
3 years ago

Faf du Plessis had an enquiry of his own after responding to reporters’ queries in Cape Town on Sunday: “No AB questions?”
Sport
3 years ago