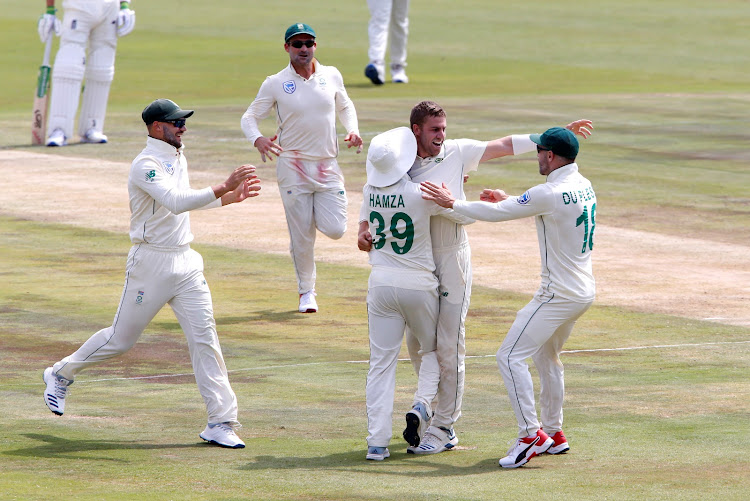 South Africa claimed four more wickets in the second session to leave England stuttering on 175/6 at tea of the second day of the Boxing Day Test at SuperSport Park in Centurion.

The damage after lunch was caused by a wicket apiece from the efforts of Vernon Philander and Dwaine Pretorius while Anrich Nortje accounted for the other two as the Proteas seized control of this match.

When they returned from the lunch break‚ Philander did not waste time as he was responsible for the removal of England captain Joe Root having scored 29 when he was caught behind by Quinton de Kock.

The scalp of dangerous England captain Root was remarkably Philander’s second wicket of the innings at that time for just one run conceded after 37 deliveries as he consistently got his line and lengths spot on.

England stabilized with Joe Denly and Ben Stokes putting together a partnership of 72 to rebuild their innings as they managed to frustrate the South African bowlers, who went off the boil a little bit.

However‚ their partnership was broken in the 39th over when Denly was caught behind by De Kock off the bowling of Pretorius.

What a session of play by the Proteas!

Philander, Pretorius and Nortje took 4 wickets in the session to swing the momentum in the direction of the Proteas.

It got worse for the visitors six balls later when Nortje rearranged Jonny Bairstow’s off-stump having scored one run.

The South African bowlers were full value for their grit and determination to deal with the England top order but they had the reliable wicketkeeper De Kock behind the stumps who took all the five catches.

England will return for the final session of the day with Jos Buttler on 6 and Sam Curran on 7 and faced with the tough job of rescuing their innings.

England captain Joe Root won the toss and elected to bowl in the first test against South Africa at Centurion Park in Pretoria on Boxing Day.
Sport
1 year ago
Next Article