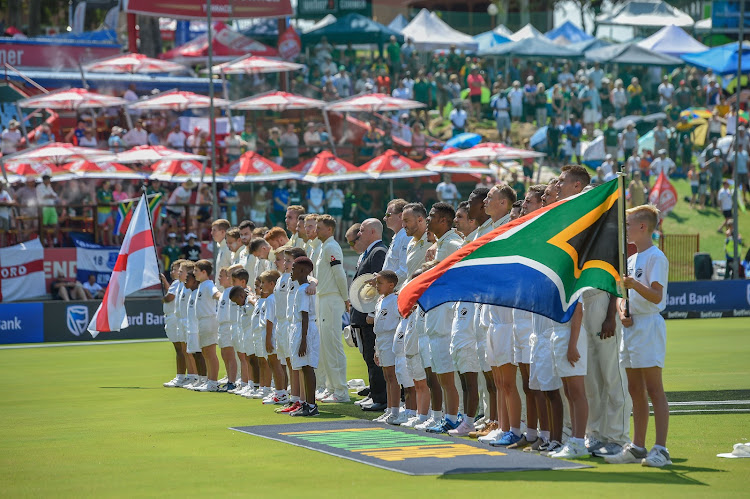 General view during the playing of the Anthems on day 1 of the first International Test Series 2019/20 game between South Africa and England at SuperSport Park, Centurion on December 26 2019.
Image: Christiaan Kotze/BackpagePix

England took a South African wicket with the opening delivery of their test series on Thursday and added two more relatively quickly to leave their hosts on 79-3 at lunch at SuperSport Park in Centurion.

James Anderson marked his 150th test and return to the England attack with the first-ball wicket of home opener Dean Elgar, and Sam Curran also grabbed a scalp in his first over when Jonny Bairstow caught Aiden Markram for 20.

Stuart Broad, who overcame flu to make the first of four tests between the sides, then had Zubayr Hamza caught behind some 20 minutes before lunch.

That left captain Faf du Plessis (14) and debutant Rassie van der Dussen (4) not out at the interval.

The 37-year-old Anderson’s first ball back in test cricket for five months, having limped out of the Ashes with a calf injury, was a warm-up delivery down the leg side that Elgar tried to flick at but instead edged through to wicketkeeper Jos Buttler.

On a hot morning, Markram also looked furious at the softness of his dismissal as he chipped the ball to midwicket as England claimed a second scalp in the 10th over. He had nicked the previous delivery, which fell just short of the slips.

Markram’s 20 came off 23 balls as the opener looked in positive form after recovering from a broken wrist, sustained when he thumped the change room wall after being dismissed for a pair of ducks in South Africa's second test in India in October.

Hamza, 24 and playing in just his third test, was caught behind by Ben Stokes off Broad for 39, just when he was looking likely to establish his credentials in an inexperienced South Africa team struggling after the recent retirement of many stalwarts.

England all-rounder Stokes elected to play as the health of his hospitalised father Ged, who fell seriously ill in Johannesburg on Monday, showed signs of improvement.

England's selection had been in doubt up until Thursday morning as several others players had been struck down by illness. Jack Leech, Ollie Pope and Chris Woakes remain bedridden, but Jofra Archer was another to recover in time to play.

More than 20,000 New Zealand fans are expected to throng the Melbourne Cricket Ground on Thursday to watch their side play their first test at the ...
Sport
2 years ago