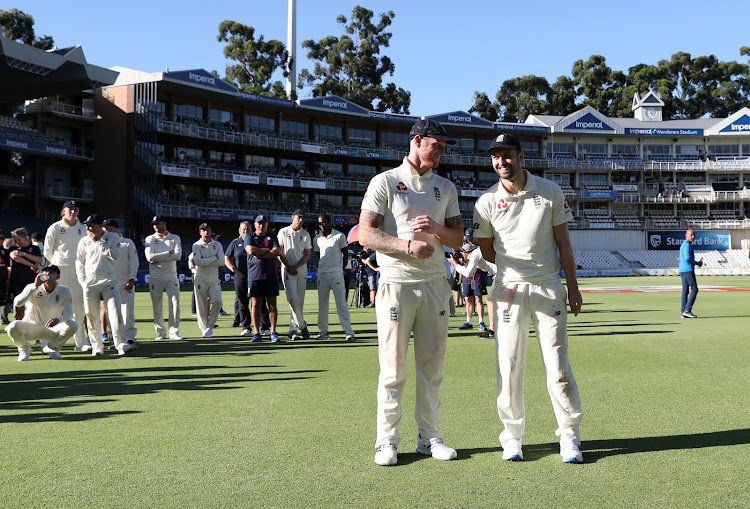 England's Ben Stokes and Mark Wood before being presented with their respective man of the series and man of the match awards on January 27 2020.
Image: REUTERS/Siphiwe Sibeko

England completed a comprehensive 3-1 series win on the fourth day of the fourth cricket Test here on Monday.

Asked to score 466 to win and level the series South Africa, despite some purposeful resistance early afternoon, fell well short as they were being bundled out for 274 in their second innings to lose the match by 191 runs.

It was South Africa’s third successive Test series defeat after the humblings administered last year by Sri Lanka at home and India away. It was also England’s second successive series win on South African soil.

As expected the sins of the first innings caught up with South Africa in their second stint at the crease.

Again England’s Mark Wood was the destroyer in chief bagging four wickets to go along with the five for 46 he captured in the first innings.

On the warmest day of the Test, Wood ran in from the Golf Course every stride more determined than the previous.

Often he would bang that ball in short of a length on an unresponsive surface but he delivered with such force the South African batsmen were on the backfoot in every sense.

South Africa did get a foothold in the middle session as Rassie van der Dussen (98) and Faf du Plessis (36) negotiated the England attack.

The quicks all toiled on a flat surface and captain Joe Root, who had bowled a few profitable overs from a South African perspective before lunch, turned to Joe Denly.

Van der Dussen took a liking to him too and he was removed from the attack after just three overs.

Du Plessis, who had been struggling for runs of late dug deep. He was patient and even got hit a few times but toughed it out until Ben Stokes was reintroduced into the attack 20 minutes before tea.

One of the deliveries from the Corlett Drive End kept a little low and the ball found the bottom of Du Plessis’s bat before crashing into the stumps. He ruefully looked at the bottom of his bat after his 92-ball stay.

Bigger blows however were delivered from the other end where Wood was charging in. He hit Van der Dussen flush on the chest which had the batter drop to his knees consumed by pain. He required attention and returned to his feet.

Wood kept charging in, changed his angle during his next over and duly got Van der Dussen to drive injudiciously.

Bavuma 27 off 29 deliveries got a brute of a delivery by Stuart Broad. It had Bavuma jump and fend in vain as he gloved one to Buttler.

Dwaine Pretorius displayed the never-say-die qualities of a lemming in his short stay. When a bit more caution should have been the order of the day he went on the pull against Broad and skied the ball to short fine leg where Sam Curran took a smart catch.

By now the Barmy Army was in full voice. The lads were imploring their team to “Get De Kock out”.

The man who fell next however was playing in his last Test. Vernon Philander who bowled only nine overs in the England second innings due to a Grade two hamstring tear came out to bat at the fall of the sixth wicket.

With slightly restricted mobility he hit a few lusty blows before glancing one off his gloves down leg side to the keeper.

It was a rather tame end to a glittering career.

How he will be replaced isn’t the only question facing South African cricket over the coming months.

From Border 22 years ago to national duty as a director

England all-rounder Ben Stokes was fined and given a demerit point by the International Cricket Council (ICC) on Saturday after a foul-mouthed row ...
Sport
1 year ago