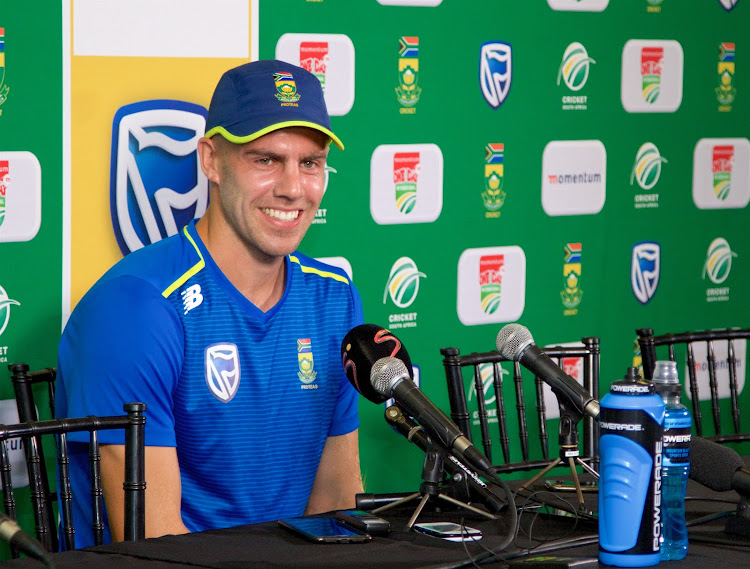 Anrich Nortje took a career best six wickets as the Proteas bowled out Sri Lanka for 157 on day one.
Image: Richard Huggard

The Proteas will be looking to bat Sri Lanka out of the match after bowling out the islanders for a measly first innings total on the opening day at the Wanderers‚ fast bowler Anrich Nortje said after taking his career best six-wicket haul on Sunday.

The visitors were blown away for 157 shortly before tea on day one with Nortje helping himself to six scalps‚ young all-rounder Wiaan Mulder taking three and Lutho Sipamla also chipping away with a wicket.

The Proteas will resume day two on 148/1 and a deficit of just nine runs with Dean Elgar (92 off 119 balls not out) closing in on his 13th Test hundred.

Elgar will resume with Rassie van der Dussen who is on 40 after the Proteas lost Aiden Markram (5 off 21) early.

Nortje said there is still plenty of time in this match and that the Proteas will be looking to bat once and bowl out Sri Lanka cheaply again in the second innings.

“For us batting wise we know we have got a lot of time and there is no rush.

“I think the boys batted really well and realise that there is no need to try and hit one or two that is outside off or that is exposing you‚” said 27-year-old Nortje.

“We just want to try and bat once I guess and if we can do that that would be great.”

The Proteas bowling unit was found wanting in the opening day of the first Test last week in Centurion as they allowed Sri Lanka to post a first innings total of 396 before the batting lineup produced the goods with 621 runs in reply.

“I think at Centurion we may have been a little bit too wide at times. Coming into this game we want to keep it dry and as simple as possible and just get into the channels.

“Lungi started off nicely‚ I went for a bit of runs and later on things were different and I got some dot balls and someone else got some wickets.

“So that is what you want. I think we did really bowl well today and hopefully we can just continue and not look to do too much.”

The Proteas won the first test in Centurion last week by an innings and 45 runs and are gunning for a victory that will seal the two-match series 2-0.

Sri Lanka won the toss and captain Dimuth Karunaratne chose to bat  in the second and final Test against SA at the Wanderers Stadium in Johannesburg ...
Sport
1 year ago