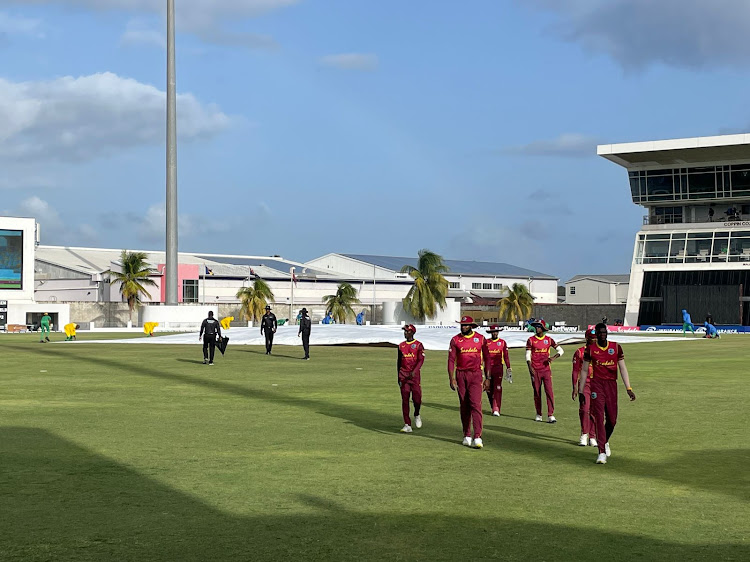 The match in Barbados had three rain stoppages.
Image: @windiescricket

Chasing a Duckworth-Lewis-Stern (DLS) adjusted 257 runs for victory after Australia scored 252-9 in 49 overs after three rain delays, the hosts suffered a collapse to fold for 123 with only returning skipper Kieron Pollard (56) offering resistance.

Starc did most of the damage for the visitors, who came into the contest at Bridgetown after being hammered 4-1 in their T20 series, with a superb 5-48 which included the wicket of Pollard who came back into the side after a hamstring problem.

Josh Hazlewood also impressed with 3-11 from six overs as the visitors took a 1-0 lead in the three-match series.

Carey, filling in for regular skipper Aaron Finch who aggravated a knee problem in last week's fifth Twenty20 between the teams, won the toss and elected to bat as Australia made a steady start.

Along with Ashton Turner (49), he added 104 runs for the fifth wicket before the team capitulated, with West Indies leg-spinner Hayden Walsh picking up his maiden ODI five-wicket haul in the space of 16 balls.

"I thought the wicket might have played a bit different to what it did. But for us to adapt and put a score on the board, but then for the Powerplay to go the way it did for us was fantastic," Carey said.

"Ashton played a crucial role. I was probably cruising along a bit and he was getting on with it, he took the pressure off."

Pollard said he was impressed with his bowlers despite the defeat.

"Par score here is about 260-270. Being able to restrict them to about 250-odd I think was a fantastic effort by the bowlers," Pollard said.

"If I'm brutally honest I thought we gave away about 20-25 runs in the field with some freebies."

Former Titans and South Africa A fast bowler Ethy Mbhalati has said he was paid way less than his white junior teammates throughout his ...
Sport
6 months ago

The Proteas top order batting and death bowling is still a cause for concern as the T20 World Cup draws closer‚ but Enoch Nkwe‚ the national team’s ...
Sport
6 months ago

Former Titans star bowler Ethy Mbhalati has said that management at the Centurion-based union deliberately blocked his selection to the Proteas.
Sport
6 months ago

Spinners Tabraiz Shamsi and George Linde shared six wickets between them as the Proteas beat hosts Ireland by 33 runs in Dublin on Monday to take a ...
Sport
6 months ago

There were tears of sorrow from black former cricketers at Cricket SA's (CSA) transformation inquiry hearings this week as they relived their ...
Sport
6 months ago