Proteas bowler Nortje expects England to be aggressive without Stokes 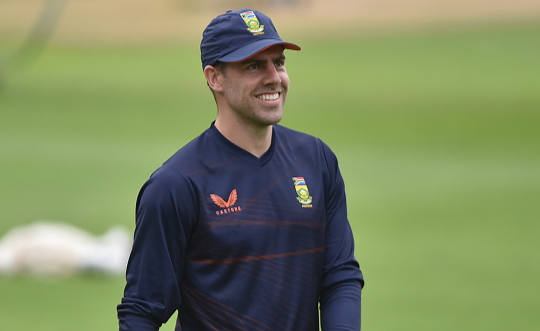 Proteas front-line seamer Anrich Nortjé is expecting England to remain aggressive even without their talismanic all-rounder Ben Stokes for the remainder of the ODI series.

Stokes retired from 50-over cricket after the first ODI on Tuesday, where England suffered a 62-run defeat with Rassie van der Dussen hitting a classy century in Durham.

The three-match ODI series moves to Old Trafford in Manchester on Friday with SA enjoying a 1-0 lead and England will be looking to claw their way back without the influential Stokes.

“I have heard all the things in the media about how they want to play their cricket and go about things. I am sure they will be looking for someone who can be attacking and aggressive,” said Nortje, who claimed figures of 4/53 in the first match.

As he reflected on his career-best century during SA’s 62 runs win over England in the first ODI on Tuesday, Proteas batter Rassie van der Dussen ...
Sport
4 weeks ago

“I am not too sure who is going to come in — we will just have to wait and see tomorrow what they are going to bring and how they are going to play. But I think they are likely to stick to what they have been trying to produce over the past few years and be aggressive. I can’t see that going any other way.”

Nortje, who is playing in England for the first time, added he is looking forward to a busy schedule in the three-format, two-month tour.

“Playing in all formats has been tough. Basically I have been playing a lot of T20 cricket for the last while and now I am back playing ODIs again.

“It is really nice to get into ODIs and the longer format and get the body going and dealing with bigger loads again.

“I am really excited about what is coming up in the season because we are going to be on the road quite a bit and hopefully the body can stay in good nick.”

Nortje is hoping for bounce from the Old Trafford pitch.

“We are not too sure about the pitch; we don’t want to read too much into the past, but from what I understand it might play a little bit better than the previous venue.

“Hopefully, we may get a bit of bounce, there is more in it and it will be a good wicket for both batters and bowlers.”

England are without fast bowlers Mark Wood, and Jofra Archer and Nortje would have liked to see them in action.

“It is sad to see they are not here because it is always good to play against them. Mark and Jofra have played major roles for their side, and I am hoping they can have a speedy recovery and get back to producing what they have been doing over the past few seasons.”

Nortje said Proteas all-rounder Andile Phehlukwayo, who has been ruled out for the remainder of the ODI series against England with concussion, would be missed.

“He has done a hell of a job so far for us; it is unfortunate and hopefully he will be fit and ready soon.”

If he was a robot or machine, premier Proteas fast bowler Kagiso “KG” Rabada would go on and on but just like the rest of us he is of flesh and blood ...
Sport
1 month ago

Heinrich Klaasen scored a fighting century to help the Proteas to an impressive 107-run victory over the English Lions in the second and final ...
Sport
1 month ago