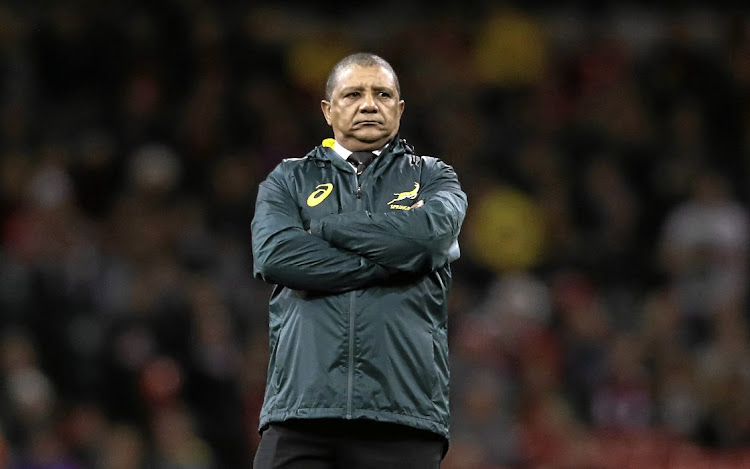 In 2017 the Boks lost 57-0 against the All Black in Albany – the heaviest defeat in Springbok history – and they also lost by a record 38-3 against Ireland in Dublin.

In 2016‚ Coetzee’s Boks lost to Italy in Florence and also recorded just four wins in 12 Tests – the lowest return in a year when SA played more than 10 Tests in a season.

Coetzee has claimed he didn’t receive enough support in terms of time he had with the team and having a coaching staff given to him.

White acknowledges these problems in his regular column for www.alloutrugby.com but questioned why Coetzee took the job under the circumstances‚ which were presented to him.

“Allister Coetzee should have raised his objections when he got the Springbok job – his claims would have had much more credibility if he’d voiced them at the beginning of his term instead of at the end‚” White wrote.

“Having said that‚ I do believe he got the raw end of the deal.

"The Bok coach will never be successful when the boardroom plays the guitar and he’s expected to dance‚ and that all started when Allister got the job via a text message without any interview process.

“I think that his love for the Boks and his desire to coach the national team probably clouded his reaction to the parameters he’d have to work in and‚ instead of saying it can’t be done‚ he overlooked the impact of those restrictions.”

White‚ who regularly clashed with the SA Rugby hierarchy when he was Bok coach between 2004-07‚ delivered a World Cup triumph in 2007.

But despite that success‚ a 2004 Tri-Nations title and an overall 67% winning ratio‚ he was asked to reapply for his job after the Boks raised the Webb Ellis Cup in Paris. He refused and his contract was not renewed.

White’s justified dislike of rugby administrators means he lays a lot of the blame of the Springboks’ failures at SA Rugby’s door.

“I can empathise with Allister‚ and I’m sure Nick Mallett and Carel du Plessis [former Bok coaches] can too‚ because the same thing happened to them‚” White said.

“One has to ask why there wasn’t a committee and an interview process. When I got the job in 2004‚ I had to explain what my team would be for the first Test‚ and then I had to tell the committee how the team would grow and change in the build up to the 2007 World Cup final.

“We started with De Wet Barry and Marius Joubert‚ the most established centre partnership in Bok history at the time‚ and went into the 2007 World Cup with Jean de Villiers and Jaque Fourie‚ who are probably still regarded as the best centre pairing we’ve had.

“That came with planning and looking closely at who was coming through the junior ranks of South African rugby.

“Allister had that insight from his time at the Stormers‚ so why wasn’t he asked‚ for example‚ what his plan was for a player like Cheslin Kolbe?

“Instead‚ there was no interview process to appoint someone to run one of the top teams in World Rugby‚ and now they’re amazed it didn’t work.

“If SA Rugby had gone through the process of explaining what they wanted and Allister had reverted with what he was planning‚ perhaps he wouldn’t have taken the job‚ or they would have compromised on what they were prepared to offer him.”

SABC Radio has pulled the plug on Super Rugby and the Currie Cup.
Sport
4 years ago

Bulls have ‘ticked the boxes’ for Super Rugby‚ says Mitchell

Bulls coach John Mitchell says they have ticked the right boxes during their grueling preseason campaign that comes to an end with a practice match ...
Sport
4 years ago

Peter de Villiers was unveiled as the new head coach of Zimbabwe in Harare on Wednesday morning as they look to qualify for the 2019 Rugby World Cup ...
Sport
4 years ago

As the Stormers embark on their third Super Rugby campaign under the guidance of coach Robbie Fleck‚ former franchise great Breyton Paulse believes ...
Sport
4 years ago