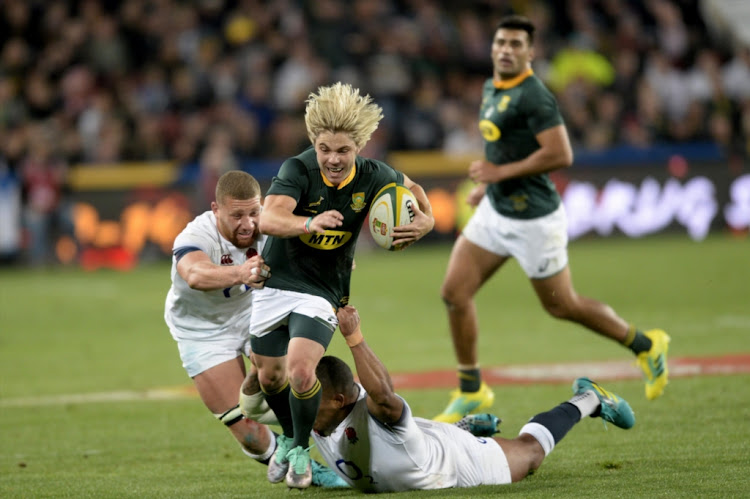 Faf de Klerk makes a break for the Springboks during the test match between South Africa and England at Ellis Park on June 09, 2018 in Johannesburg, South Africa.
Image: Lee Warren/Gallo Images

Springbok scrumhalf Faf de Klerk praised the Ellis Park factor in the home team’s stunning comeback to win the first Test against England on Saturday‚ but couldn’t pinpoint exactly what it is.

England coach Eddie Jones too was stumped when asked if the Boks would have come back from 24-3 down inside 20 minutes at any other venue in the world.

“That’s a good question mate. I’ll have to sleep on that one and come back to you‚” Jones said.

The home team rallied to win a breathless match 42-39 to take first blood in the three-Test series.

De Klerk‚ who was part of the Lions set up for three seasons before joining Sale in England‚ made a triumphant return to Test rugby after a year in the wilderness.

His speed at clearing rucks‚ his vision and his much improved kicking game‚ was one of the major factors for the turnaround. Jones described him as a ‘buzz saw.’

“To get a win in a Bok jersey is special and to do it against England is more special‚” De Klerk said.

“Coming back from that deficit was great but it was far from the complete performance‚ and we all know that.

“It’s always good to play at Ellis Park‚ the fans were great and it felt like home.

“I was surprised how we came back but I also never doubted that we could fight back because I have experienced big comebacks at Ellis Park before‚” De Klerk said.

“When England were well ahead I was thinking about the second Test against Ireland in 2016. In that game we were 19-3 down quite early on so I wasn’t rattled by the score.

It might be the exuberance of youth‚ or supreme confidence in both his and the Springbok team’s abilities‚ but wing Sbu Nkosi always believed the ...
Sport
3 years ago

“Playing for the Lions we had many games where we had to come from behind to win and we did. I can’t really pinpoint why Ellis Park is like that – the altitude and the fans obviously – but it really is a massive factor for us.”

De Klerk who was‚ by coach Rassie Erasmus’ own admission‚ a ‘risky’ selection‚ repaid the faith with his best performance in a Bok jersey.

The diminutive halfback acknowledged that his time in England has developed his skills and as a result‚ improved his game.

“Playing in England has taught me to deal with pressure a lot better because the game there feels like Test match conditions every week‚” De Klerk said.

“You really need to have a kicking game that’s on point and you need to still have the ability to score tries.

“I also understand the English approach a bit more and I knew that they would try and put me under pressure around the fringes of rucks.

“When I left I knew I was unlikely to play for the Boks again‚ but I also believed if I played well I might get a call up to the World Cup squad in 2019.

“That was the plan – to continue to play well and hopefully the coaches would notice me.”

He certainly gave a performance that was impossible to go unnoticed.