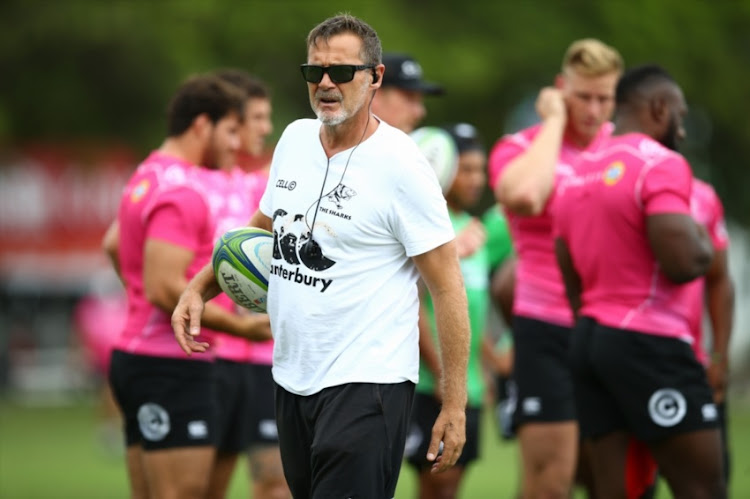 The Cell C Sharks head coach Robert du Preez is hoping his side can go all the way in the Currie Cup final against Western Province on Saturday October 27, 2018 at Newlands Stadium in Cape Town.
Image: Steve Haag/Gallo Images

Sharks coach Robert du Preez has reverted to picking his namesake son Robert du Preez at flyhalf for their crucial clash against the Jaguares in Buenos Aires on Saturday.

It's a game the Sharks (33) need to win if they are to have stand any chance of reaching the play-offs.

They are also at the mercy of the Bulls (34)‚ Lions (35) and Stormers (30)‚ who all have early games against the Highlanders‚ Hurricanes and the Sunwolves.

It's not a given the Bulls and the Lions will win against the New Zealand sides who also have play-off aspirations‚ but the Stormers should be able to see off the Sunwolves.

The Jaguares (41) host the Sunwolves next week and in the event of losing to the Sharks‚ they can still finish first as they can reach a maximum of 46 points.

In that event‚ the SA teams will cancel each other out as the Bulls and the Stormers host the Lions and the Sharks respectively.

Back to team matter‚ with Du Preez moving Bosch back to fullback‚ the Sharks are robbing themselves of one of their best players of the season.

Bosch has been steady at pivot and provided well-time excitement and verve in the number 10 jersey.

Bosch has kept Du Preez on the bench and while the Sharks have continued with their hit-and-miss form throughout the season‚ he has been an ever-fixed mark of consistency.

The change means Aphelele Fassi drops to the bench while Tyler Paul and Hyron Andrews start at flank and lock respectively in place of Jean-Luc du Preez and Rubin van Heerden.

Du Preez misses the game entirely with an Medial Collateral Ligament niggle while Van Heerden drops to the bench. Jeremy Ward and Mthokozisi “Zee” Mkhabela will make their appearances off the bench.