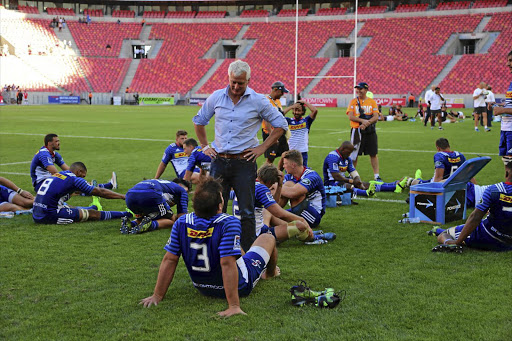 The Stormers’ squad is so threadbare that coach Robbie Fleck has awarded three debuts for this weekend’s clash against the Sunwolves at Newlands.

In all he has made eight changes to the side that lost 41-22 to the Lions last week – seven of them enforced – as he tries to put 23 fit men on the field.

Fullback Damian Willemse and lock Eben Etzebeth are out for six weeks with knee and hand injuries respectively while No 8 Sikhumbuzo Notshe was on crutches and in a moon boot on Thursday.

He has an ankle injury and will the rest of the campaign.

Damian de Allende misses out this weekend due to Springbok resting protocols meaning Dan Kriel moves to inside centre.

Wing Edwill van der Merwe and lock David Meihuizen and looseforward Chris Massyn come in for their Stormers debuts‚ the latter pair named on the bench.

There are also first appearances this season for wing Craig Barry‚ in for the concussed Seabelo Senatla and centre EW Viljoen‚ who is among the replacements.

The Stormers are still fighting for a play-off berth and need a full haul of five points against the Sunwolves to stay in the battle.

Willemse and Etzebeth are both expected to fit in time for the Boks’ World Cup campaign. Bok skipper Siya Kolisi is already in a race to be fit for the tournament due to a knee injury picked up two weeks ago.

“It’s really late in the season for players to be making debuts‚ but that the injury situation we face‚” Fleck said.

“Ideally you want continuity at this stage of the season‚ but it’s not that way‚ so we’ve had to juggle the players. It’s a massive opportunity for the youngsters.

“Massyn and Meihuizen have also been impressive in the Supersport Series. Massyn is an abrasive player and we need that type of aggression.

“Damian Willemse will need an operation and he should be fit for the World Cup‚ but he is getting a second opinion on that.

“Edwill van der Merwe has been outstanding for the Supersport side while Damian de Allende had to be rested for this game or our final one against the Sharks next week.

“We should have hooker Scarra Ntubeni‚ centre Ruhan Nel and fullback SP Marais back for next week.”

“We’ve had some calling challenges after losing both our locks in the first half last week‚” Fleck said. “We had flanks at lock and hookers at flank. It was very disruptive.

“Chris will just give us some guidance and control at the set piece.”