Junior Boks in control of own destiny at World Champs 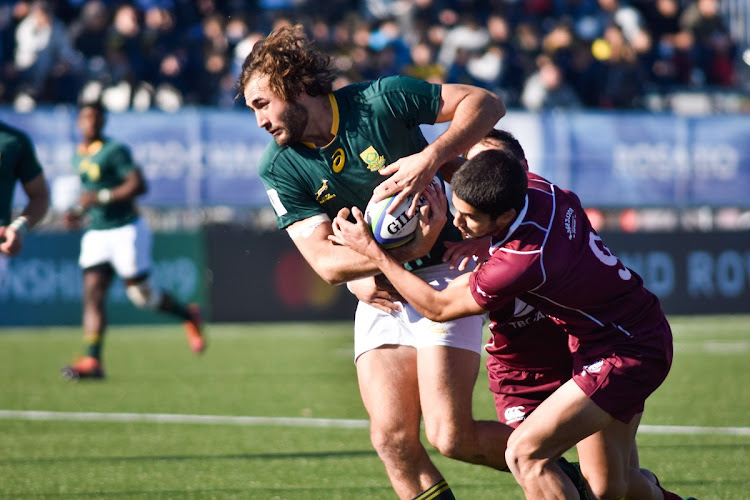 The Junior Boks will only need two points from their final group match against New Zealand at the U20 World Championships on Wednesday to secure their place in the semi-finals.

The Junior Boks produced a strong second half display against Georgia in Rosario on Saturday to win 48-20‚ scoring eight tries in the process.

They currently top Pool C on 10 points with a positive 52 points’ difference‚ one better than New Zealand. Both sides have scored big wins over Scotland and Georgia at the annual showpiece in Argentina.

The top teams in each of the three groups automatically progress to the semi-finals with the best second-placed team taking the fourth berth.

A new professional contracting model will see a salary cap of R60-million implemented at eight major unions with a maximum of 45 contracted players ...
Sport
2 years ago

Currently‚ defending champions France top Pool A with 10 points after wins over Fiji and Argentina.

The hosts are on six points and could move to a maximum of 11 points if they beat France in their final Pool fixture.

Fiji and Wales are playing for pride in the Pool’s other match.In Pool B Australia are the surprise leaders after smashing Six Nations U20 champions Ireland 45-17 on Saturday.

The Irish‚ who beat England in their opening match‚ are likely to be too strong for Italy in their final game‚ but can only reach a maximum of 10 log points.In that case Ireland would have to rely on either SA or NZ beating the other with the loser failing to gain a bonus point.

Even then it might not be enough because of their poor points’ difference and the fact that Argentina or France could both move beyond 10 log points if the hosts win their final match with a bonus point and France earn a bonus point or two.

Australia and England meet in Pool Bs final match with England out of the running on four points despite bouncing back from a 42-26 defeat against Ireland to beat Italy 24-23.

Stormers too strong for Sunwolves

The Stormers laboured to a 31-18 win over the Sunwolves at Newlands on Saturday that leaves their chance of making the Super Rugby play-offs firmly ...
Sport
2 years ago

Their failure to earn a try-scoring bonus point in that match has cost them a semi-final berth as they can only earn a maximum on nine log points.South African coach Chean Roux was happy with his side’s second bonus point win of the competition‚ but admitted much improvement was needed.

Two yellow cards and numerous handling errors undermined the result.“We at least got the bonus point‚ so we have 10 points from the competition‚” said Roux.

"There were opportunities against Georgia‚ but we made too many unforced errors. I don’t know why it happened‚ but it seemed as though we could not catch the ball in the first half.

"Our discipline was also not good enough. Playing with 14 men for 20 minutes will always make things tougher‚ so we need to rectify that.”

Roux said his charges had to sharpen up in the next few days‚ with a big task ahead in their final Pool match: “The one thing we will take from this match is that we have to be ready mentally for New Zealand.

"We need to have our plans ready and be sharp for the next game.“The positive for us is that we are still in the competition and our fate is in our hands.”