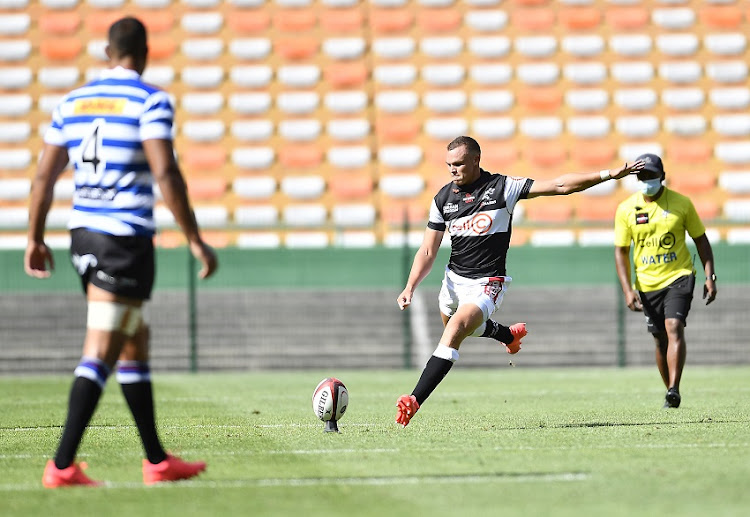 In Western Province's last match at Newlands‚ Sharks flyhalf Curwin Bosch almost churlishly announced himself as the wrecking ball to the hosts’ hopes of reaching the Currie Cup final.

There was no fitting farewell as Bosch kicked the home team in the teeth in the Sharks’ plucky 19-9 semifinal victory on Saturday. Next weekend they will play in the final against the Blue Bulls who beat the Lions in Pretoria earlier Saturday afternoon.

To their fans Western Province's performance was almost as deflating as the circumstances that led to the team's move across town. They very much held sway in the possession and territory stakes but they lacked penetrative thrust and‚ tellingly‚ imagination.

To be fair‚ the Sharks were massive when they were called to defend their line. Their maul defence was superb.

They showed huge character spending the bulk of the match on the back foot‚ absorbing an inordinate amount of pressure in the process.

Western Province have been dealt a hammer blow ahead of their Currie Cup semifinal against the Sharks at Newlands on Saturday.
Sport
10 months ago

They scrapped‚ scrambled and generally harangued Western Province and eventually the nuisance factor didn't just gradually break the home team's resolve‚ the Sharks drew from it.

Ox Nche‚ Thomas du Toit‚ JJ van der Mescht and Sikhumbuzo Notshe delivered towering performances in the face of adversity and it was their truculence that helped the Sharks maintain a foothold in the match.

Apart from their unbridled commitment in defence the Sharks' decision-making and game management further aided their cause.

Despite their own recidivism the Sharks maximised opportunity when opportunity presented itself.

The home team had identified Bosch as the Sharks' greatest threat in the build-up to the clash and their caution wasn't misplaced.

Bosch was by no means flawless but was good enough to advance his side on the scoreboard on the back of courageous performances elsewhere in the visiting team.

Though the Sharks were the primary transgressors in the penalty count in the first hour‚ Bosch‚ tellingly made WP pay when he was presented opportunity off the kicking tee. He was particularly lethal from long range.

Bulls coach Jake White: Who knows what to expect from Currie Cup semifinals

Bulls coach Jake White doesn’t know how this weekend’s Currie Cup semifinals are going to pan out because all the teams have not played rugby in a ...
Sport
10 months ago

The brief for the Sharks' pack was to stand their ground against the redoubtable Western Province scrumming unit and they did more than that.

South Africa’s Test players must have at least 400 minutes of game time under their belts before they face the British and Irish Lions later this ...
Sport
10 months ago

South Africa are open to "all options" to play the British & Irish Lions and are willing to travel to the United Kingdom to make sure the series goes ...
Sport
10 months ago

SA’s director of rugby Rassie Erasmus has raced to defend the integrity of the Currie Cup after the standard of play in the tournament was questioned ...
Sport
10 months ago