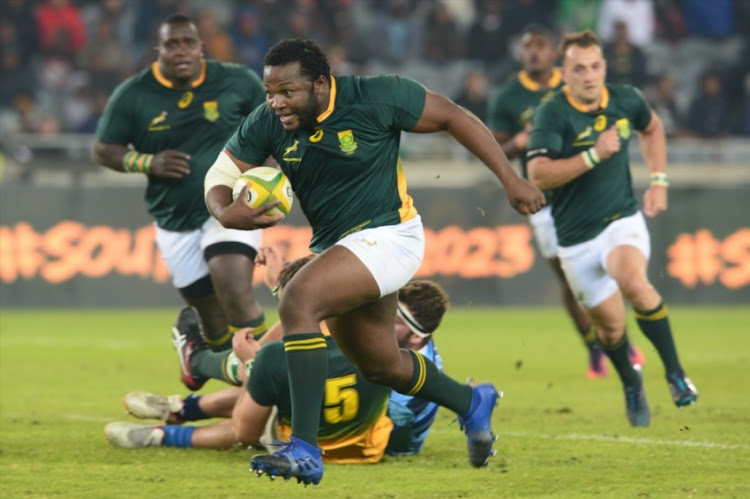 A file photo of Ox Nche in action for South Africa A on his way to scoring a try during the match against the French Barbarians at Orlando Stadium in Soweto on June 23 2017.
Image: Gallo Images

You would be forgiven for thinking Ox Nché would be weighed down by the Springboks No 1 jersey.

The former BSc Statistics student‚ however‚ is undaunted about wearing the number worn with such distinction by an “Os” and a “Beast” en route to Rugby World Cup titles for the Springboks‚ while being stuck on one Test cap for three years served more as a lever than an anchor.

He will finally double his number of Springbok caps against Georgia at Loftus Versfeld on Friday.

It is an occasion that will give the Springboks and their No 1 the opportunity to emerge from the shadows.

The team has not played since the Rugby World Cup triumph in 2019‚ while Nché has not worn the Green and Gold since the team’s inglorious capitulation against Wales in Washington a year earlier.

A hugely inexperienced Bok team let it slip and lost in the last minute of Rassie Erasmus’s first Test in charge on an occasion that threatened to be an international cul-de-sac for some of the miscreants on display.

Nché admits all he had was “hope” and “hard work” but he finally gets a reprieve.

“Ever since that Test‚ I’ve been telling myself that I’ll do whatever it takes to get back to that level‚” said Nché after he was named in the Bok starting team for Friday.

“It is the biggest achievement.”

The task‚ however‚ is as gargantuan as his predecessors.

Nché contends that dwelling on the prospect of filling the boots‚ or the jersey Os du Randt and Beast Mtawarira once wore‚ is unnecessarily burdensome.

“I don’t think about it as much as possible because those guys are legends. For me not to put extra pressure on myself because I just focus on what I do for the team.”

Unlike Du Randt‚ Nché didn’t earn his moniker on account of size.

It sprung from what he did.

In primary school his coaches devised a move called “Ox” that basically required Nché to take a quick tap and run people out of the way.

He has clearly come a long way since toeing the soccer ball into touch in grade seven.

“I don’t have a lot of experience and I’m probably one of those players with the least caps‚” reminded Nché.

“The coaches have standards that the Springboks thrive upon. I’m still getting there and I’ll do anything to make sure I'm on the same page as the rest of the players.”

Having former Springbok‚ Cheetahs and Toulouse loosehead Daan Human as Bok scrum coach has helped his re-entry in the national set-up.

“Coach Daan has worked with me from under-19 days.

“I know him very well. He has a passion for scrumming. Coach Daan has helped us massively to get to the next level.”

The challenge of coming to grips with the redoubtable Georgian scrum is one he relishes.

Clearly primed‚ Nché is ready to prove he doesn't make up numbers.

A return to form for captain Siya Kolisi is a welcome relief for South Africa coach Jacques Nienaber as he prepares the side for the vital two-test ...
Sport
10 months ago

No fans at stadiums but British Lions tour will go ahead, we have to make it work, says SA Rugby
Sport
10 months ago

Back together after almost 20 months the Springbok coach on Tuesday unveiled a squad that features three debutants for Friday’s Test against Georgia ...
Sport
10 months ago

Herschel Jantjies, Vincent Koch and S’bu Nkosi have been named as the players who tested positive for Covid
Sport
10 months ago

They may be fielding a largely inexperienced squad against the touring British & Irish Lions but in Jannie du Plessis the Ellis Park-based Lions will ...
Sport
10 months ago

South Africa cancelled a planned training session for Sunday after three players tested positive for the Covid-19 virus on the eve on the British and ...
Sport
10 months ago