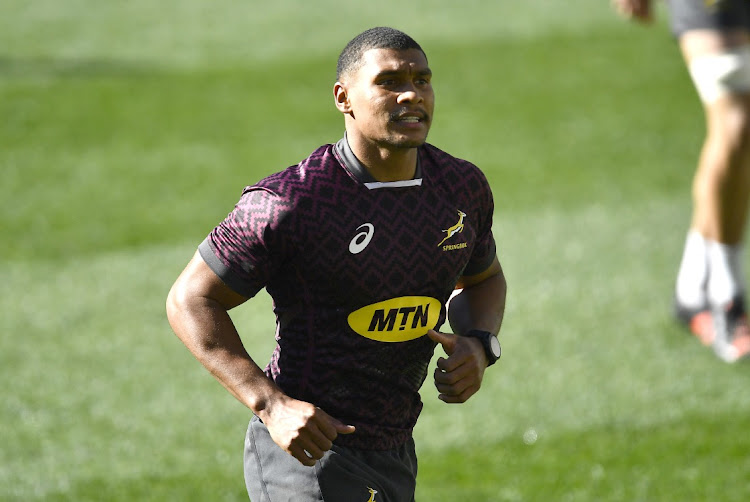 He's had to hang back and wait in the wings. He's occasionally taken centre stage but mostly he's had to pivot to meet the whims of the coaches he's played under.

Welcome to the Peter Pan existence of Damian Willemse who's not ready to drop anchor in a particular position. He is equally loath to nail his colours to the mast.

“Our [individual] goals are never higher than that of the Springboks‚” said Willemse. “I'm happy to be helping wherever I can for the team and where the coach needs me. I'm lucky to be performing all those roles. I'm actually enjoying it.”

Willemse may still be a backline floater but he understands the gravity of his role in Saturday's must-win second Test for the Springboks against the British & Irish Lions.

The Springboks' Bomb Squad has been reassembled which means a jack-of-all-trades backline substitute is required to cover near all eventualities.

Rassie Erasmus has strongly dismissed suggestions that he is behind a controversial Twitter account ran by a certain Jaco Johan that has grabbed the ...
Sport
2 months ago

The 23-year-old argues that he has been in the Bok set-up long enough to take on a multilayered job.

“I’ve been in the system for a few years now‚” reminded Willemse. “I know the structures. I have been playing 15‚ 10‚ not so much 12. Because I’m familiar with the way we do things‚ as well as having someone like Damian de Allende to learn from‚ helps me a lot.

“The coaches have been clear with the plans for me now that I’m covering 10‚ 12 and 15‚” he added. “Playing 12 is not all that different to 10. It’s about being in the front line and chasing kicks‚ but I have played Currie Cup and club rugby at 12‚ so it hasn’t been too much of a change. I feel fortunate to be able to fulfil different roles and I’m really enjoying it.”

Willemse doesn't know where he will be deployed. How the game unfolds will most likely dictate that. “We will have to see between myself and Willie (le Roux) who goes where. We'll have to see if there is an early injury or a tactical movement.”

Though he is filling the void left by Frans Steyn‚ Willemse is often compared to Brent Russell who came off the bench 15 times in his 23 Tests between 2002 and 2006. Willemse though still has time to convince that he can attach himself to a number on the Bok jersey.

For a player endowed with his off-the-cuff wizardry, finding his voice in a team that sticks to the hymn sheet as fastidiously as the Springboks is easier said than done. The Boks' suffocating game plan does‚ however‚ have spin-offs for players of Willemse's ilk‚ albeit deep into the game.

“The coaches backing me are really important. Them giving me the freedom and licence to go out. It’s important for me to grab my opportunities and play with everything I have for my country‚” said Willemse.

Should Willemse be required to hold the fort at flyhalf‚ he will draw a lot of attention‚ and not just from the vast television audience‚ but from the Lions too. He can be as direct as the hard-running Handré Pollard‚ but he also has the ability to sidestep a rhino in a phone booth.

It is perhaps his goal-kicking that will invite the most interest should he be handed the kicking tee. It is an area in which he has sought improvement and it is a theme that would have resonated throughout the squad this week as the Boks look to avoid a series defeat.

“All these guys are professionals‚” said Willemse. “We have been in this position a few times. One thing I can guarantee is that we won't sit back and feel sorry for ourselves. We have a lot to play for. We have everything to play for.”

Rassie Erasmus says World Rugby's failure to provide a swift response to questions about the rules has negatively affected the Springboks' plans for ...
Sport
2 months ago

With so much of the fallout from the first Test dominated by talk about the match officials‚ the ghastly hangover will likely linger until the ...
Sport
2 months ago