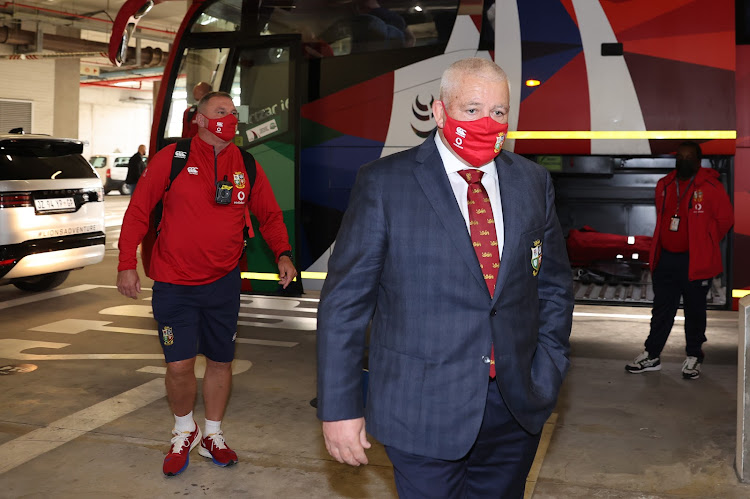 British & Irish Lions coach Warren Gatland says he will use the 14 days of isolation in a hotel upon arrival in New Zealand to think about the next chapter in his life.
Image: @lionsofficial/Twitter

Comparisons between the Springboks' series win over the British & Irish Lions on Saturday and the one achieved in 2009 are easily drawn.

But the one that will sting Lions coach Warren Gatland most is the 19-16 scoreline in favour of the Springboks which was also the score when the Green and Gold edged his Wales team in the semi-final of the last Rugby World Cup.

It was Handre Pollard who converted a penalty to calm Bok nerves then and on Saturday it was the turn of Morne Steyn to provide a late but telling sting in the tail.

Gatland may one day reflect on the significance of both those kicks as they potentially robbed him from becoming the game's most decorated coach.

He‚ of course‚ still boasts fine coaching credentials but Wales would have fancied their chances at a shot at World Cup glory against England‚ while a Lions win in South Africa to mark three successive southern hemisphere tours without series defeat would have been some achievement.

On Saturday‚ Gatland's team defied pre match predictions of being on the receiving end of the momentum the Boks were said to take into the decider.

It was the Lions who played with energy and tempo and who held sway in the stakes for possession and territory in the first half.

Apart from a maul try for hooker Ken Owens‚ the Lions did not make the inroads on the scoreboard commensurate with their effort.

They will perhaps lament not kicking for goal more often when opportunity arose.

In a wider context‚ they simply did not convert what was on offer when the Boks were most prone.

The Lions' game management will be a source of much contemplation.

The penalty count of 15-12 in the Springboks' favour proved critical, Gatland argued.

Still‚ it was a stirring effort given the Lions looked a well beaten side at the conclusion of the second Test.

“I’m very proud of the effort the guys put in‚” said Gatland.

“I thought we were bold‚ we went out there to be positive and to play some rugby.

“It was a proper Test match‚ it was tough and physical and that’s what you expect‚ what you want with a Lions series.

"You know it’s not going to be easy going away from home and playing the world champions.”

Gatland lamented the lack of time the team had to prepare but that‚ to be fair‚ goes for both teams.

He advocated greater planning ahead of Lions' series.

“The Lions (as a commercial entity) need to go and talk to the clubs and unions about having adequate preparation time to go on a tour.

"You’re playing away from home‚ there’s a lot of expectation to win a series‚ you’re putting a team together in such a short period.

“As the Lions‚ when you’re putting the best players together from the Northern Hemisphere we get less preparation than the national teams on their home tours.

“Hopefully in the next six months they can hopefully iron that out and get the schedule for the next four years tidied up so that you can get the whole squad together for a couple of weeks before you go on tour.”

After three Lions tours as head coach Gatland is yet to decide his future.

“I’m proud of my involvement‚ I’ve been very fortunate‚ I’ve been passionate about the Lions‚” he said.

“I fly back to New Zealand.

“It’s a long flight and then I’ve got 14 days of isolation in a hotel.

"That time on my own will be a good time to think about what the next chapter in my life is going to be. I haven’t got any long-term plans.”

Springbok captain Siya Kolisi reflected on the monumental challenges the team had to overcome to secure their come-from-behind series victory over ...
Sport
3 months ago

With the series against the British & Irish Lions out of the way the Springboks can turn their gaze to the playing fields of the Rugby Championship ...
Sport
3 months ago

The most unique British & Irish Lions series will conclude on Saturday with the result‚ perhaps fittingly‚ as nail-bitingly in the balance as a ...
Sport
3 months ago

The most unique British & Irish Lions series will conclude on Saturday with the result‚ perhaps fittingly‚ as nail-bitingly in the balance as a ...
Sport
3 months ago

The All Blacks rode a second-half blitz to a 33-25 win over Australia but conceded late tries to flatter the Wallabies in a blustery Bledisloe Cup ...
Sport
3 months ago

British & Irish Lions made the tour of our lives

It was always going to be a British & Irish Lions Test series like no other.
Sport
3 months ago