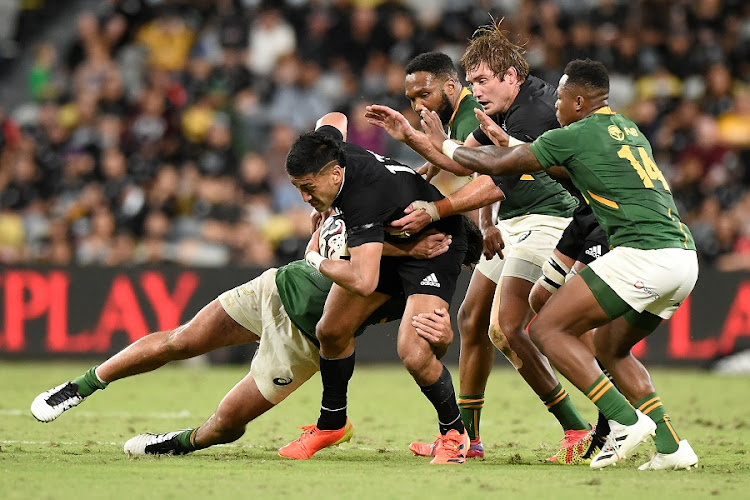 The Springboks are desperate for a win.
Image: Matt Roberts/Getty Images

Bok coach Jacques Nienaber has hyped this weekend's clash against the All Blacks in Gold Coast as his team's biggest of the year. What is perhaps less clear is whether he meant Test or test?

The latter would certainly be more plausible as the Springboks are desperate to remind their greatest foe, and the rest of the rugby world for that matter, that they still possess the skill, composure and game plan to topple the All Blacks.

The Boks haven't beaten the All Blacks since 2018 and it has been four clashes since they got that rare win in Wellington.

The Boks' status as World Champions and best ranked team in the world has taken a battering over the past three weeks, and while they will remain the former until at least the next Rugby World Cup, they have relinquished the top spot to the All Blacks.

It means they very much go into Saturday's clash on the back foot and can expect a thorough examination of their mettle. Apart from having to summon the fortitude to bounce back from three straight defeats, the Springboks' game plan will come under even sharper focus.

Their proclivity to take to the air with their hard-earned possession, at times when they have already secured favourable field position, has won them few admirers. In defeat, that tactic becomes an eye sore.

Boks unlikely to kick the habit

Nienaber rightly reminded that they came desperately close to winning two of the last three Tests employing that tactic. His players have backed up that sentiment and are likely to go down the same path this weekend.

“If New Zealand gives us space in a different area we'll take it,” said Nienaber.

“Sometimes the space is in front of you and you take it. Sometimes it's out wide and then you try and outflank them. Obviously if they load the front line with 14 and just one at the back, the space will probably be at the back,” the coach explained.

He said they need to set the foundation they had built before the last RWC before they can develop different areas of their game.

That Nienaber feels emboldened at running the All Blacks as close as the Boks did in their 19-17 defeat last week is also reflected in team selection where only one injury enforced change has been made to the starting team.

Ox Nché is the starting loose head prop again after tight head Frans Malherbe was ruled out through injury. To accommodate the change Trevor Nyakane reverts to tight head.

On the bench Jasper Wiese comes in for Marco van Staden, who is also out injured.

Frustratingly, star wing Cheslin Kolbe remains an absentee as he is still sidelined with the leg injury he sustained eight days before the first Wallaby Test.

“The moment a player isn't comfortable or we feel he is not functional we won't reintroduce him,” said Nienaber.

“That was a six to eight-week injury,” he revealed.

With the Springboks unable to successfully defend their Rugby Championship crown, Nienaber said there was no temptation to expose fringe players to the cauldron of a Test against the All Blacks.

“One of our strategic goals is to create squad depth but the biggest one is to win. Whenever we get the opportunity to give our rotational players a chance to play a Test we do that, but having missed so much in 2020 due to Covid-19 I feel we need to get back to standard of 2019.

“We are still building towards that. When No 1 and No 2 in the world meet, you play your best possible.”

Given the amount of time the team had spent in quarantine over the last few months, Nienaber said the players were excited they are almost heading home. “We must just make sure we have two feet still in Australia. I remember in Super Rugby where at the end of a long tour sometimes you have one foot in SA (before the last game).”

The Springboks showed marked improvement in the 19-17 Rugby Championship defeat to New Zealand in the landmark 100th meeting between the two sides on ...
Sport
3 months ago

Narrow defeat to New Zealand has Springboks on their knees

The qualities that helped the Springboks scale rugby's summit deserted them in their 100th Test against the All Blacks in Townsville yesterday.
Sport
4 months ago

The Springboks took some positive strides but it still left them coming up short 19-17 against their great adversaries in their Rugby Championship ...
Sport
4 months ago