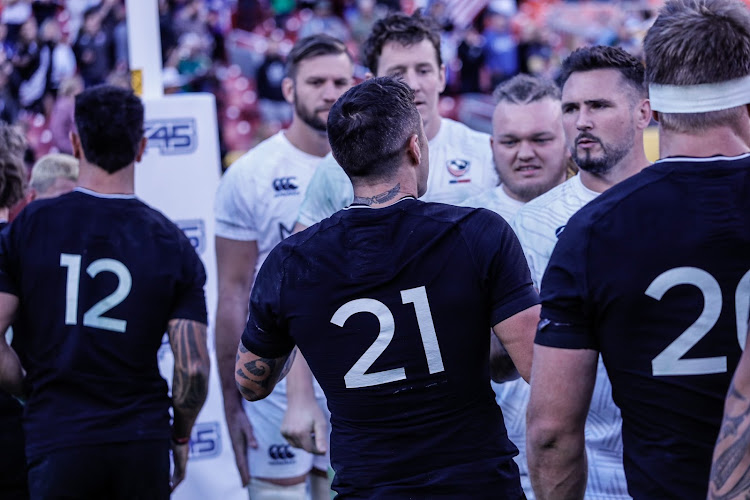 All Blacks players shake hands with the US players after the match in Washington.
Image: @AllBlacks/Twitter

New Zealand coach Ian Foster claimed the All Blacks learned valuable lessons ahead of more testing challenges on the European leg of their current tour after handing the United States a 104-14 thrashing in Washington on Saturday.

New Zealand take on Wales on Saturday before facing off against Italy, Ireland and France in the following weeks and Foster stressed the meeting with the United States was important head of the trip to Cardiff.

"It's immense use to us," said Foster.

"This game was vital in terms of a number of players who hadn't played for three to four weeks, it was a great chance for a really good hitout, and to do it in a special stadium and on a special occasion is pretty valuable.

"We go to Wales next week, we've had a bit of contact under our belt, we're really delighted with some of the skill stuff we were able to put on the park and it gives us a good launching pad for what is going to be a big month."

New Zealand won The Rugby Championship despite their loss to the South Africans in the final round of matches in the competition, and Foster believes his side have improved since cementing their status as the southern hemisphere's top team.

"Our handling, the quality of our passing, and some of our support-line work went up a step from the Rugby Championship," he said.

"I wouldn't underestimate the importance of being able to give a number of new players – in the pack six out of eight had played less than 10 tests – a feel of what it's like be an All Black in different situations.

"And there are going to be plenty of different situations coming up the next four weeks."

Tappe Henning predicts better days in the UR Championship

SA’s teams were at times unnecessarily spooked but they will get better in the United Rugby Championship said Tappe Henning, Scotland’s outgoing ...
Sport
9 months ago

Former professional rugby player Ethienne Reynecke has confirmed that his uncle Hugh Bladen is recovering well after suffering a second stroke in a ...
Sport
9 months ago

Rassie Erasmus, SA Rugby's director of rugby, will resume his “normal role” on the Springboks' end of year tour, according to coach Jacques Nienaber.
Sport
9 months ago

Jacques Nienaber has stuck to core Springbok group for Tests against Wales, Scotland and England
Sport
9 months ago

Springbok coach Jacques Nienaber has announced a squad of 32 players for the Castle Lager Outgoing Tour to the UK next month where they are scheduled ...
Sport
9 months ago