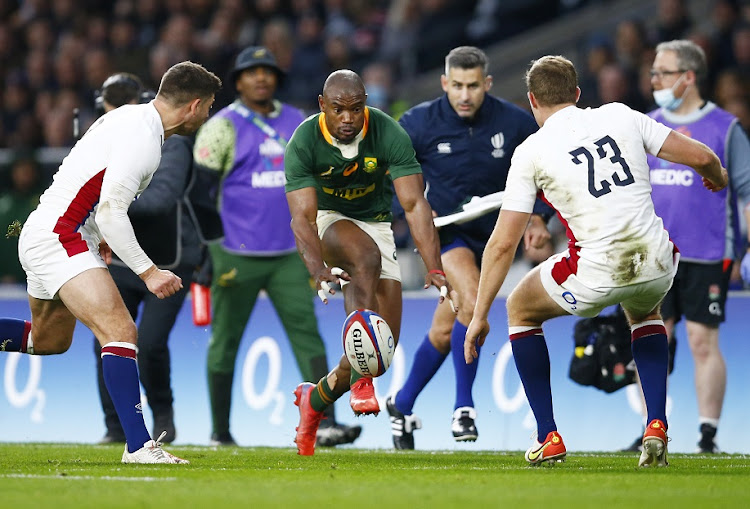 And so it proved a bridge too far. The Springboks, hoping to go undefeated for the first time on an end-of-year tour since 2013, came up short against an old and redoubtable adversary.

England beat the Springboks 27-26 in an error-ridden, absorbing and often tempestuous affair at Twickenham on Saturday.

Odd as it may seem, the team that was three tries to the good, with England were hanging on by their fingernails for much of the second half. They lost their grip but regained it through a last-minute Marcus Smith penalty to seal victory.

The Springboks took control but they did not make good on all their dominance after the break. Instead Maro Itoje, Smith, Freddie Steward and Ben Youngs stood tall as coach Eddie Jones will feel immense pride in masterminding a win over the much-favoured Boks.

Jones, England’s Aussie coach who has guided two teams to World Cup silver medals, knows a thing or two about rolling with the punches and he wasn’t short of some bellicose talk ahead of the clash. Perhaps in an attempt to rouse his relatively inexperienced forwards he suggested the Springboks shared the view that the England pack is their team’s soft underbelly.

There had been no such suggestion from the Boks apart from captain Siya Kolisi saying after the 2019 World Cup final that they knew how to beat England.

Jones though is an adroit puppet master. He is one of the most adept operators at getting the pulses racing in his team while getting under the skin of the opposition.

England certainly were fired up. They looked bold and fearless against opponents that looked burdened by what they brought into the game.

The visitors will rue sloppy set pieces in the first half, while questionable tactics and poor goal-kicking conspired against them in the second.

Despite the errors though, the match, for sheer tension, lived up to the hype. This game was almost as eagerly-anticipated as the one that led up to their last meeting in the Japan 2019 final.

On this occasion the Springboks, for their last match in a desperately trying year, had to report for duty at the game’s self-appointed HQ, seemingly to confirm their champion credentials all over again.

👏 It’s all over at Twickenham. The Boks left nothing out there but in the end, England’s three tries sealed the deal for them. Well done @EnglandRugby on the win in what was a very tough Test to end our season. #StrongerTogether #StrongerForever #ENGvRSA #CastleOutgoingTour pic.twitter.com/Ls7qA2ioE6

They went into the game not just as World Cup holders but as rugby’s top-ranked team.

They, however, were the less assured team in the first half.

Again, the Boks went into half time with a deficit but, again, they slowly and inexorably inched their way back into the match, largely through the considerable grunt of their forwards.

Just as Ox Nché, Bongi Mbonambi and Trevor Nyakane found their voice early in the second half, they were substituted allowing Steven Kitshoff, Malcolm Marx and Vincent Koch to continue the demolition job.

As the Bok forwards firmed their grip England became increasingly prone to error but just as the match seem to swing decisively SA’s way, England hit back.

Earlier in the second half the Bok scrum grew an arm and a leg.

It took a while before they profited from their territorial dominance as two Handré Pollard penalties drifted wide.

England held the ascendancy in the initial exchange but it was also due to the Boks’ foibles.

An early engage here, and bind slip there, helped bring about a frustrating opening 40 minutes for the visitors — but their errors didn’t end there.

Sbu Nkosi was considered for a berth at wing in the Springbok team for the match against England at Twickenham on Saturday, but coach Jacques ...
Sport
3 weeks ago

In the line-out too they failed to assert themselves as Bongi Mbonambi failed to find his jumpers with the regularity he is known for.

Perhaps the tone was set early on when England won a free-kick and then a penalty from a scrum close to the Springbok tryline. From the resultant pressure Manu Tuilagi was given space to dive over in the corner to hand England the lead but it came at a price.

In the act of scoring he aggravated a leg injury and departed the scene after just seven minutes, and with England going into the game with just two backs on the bench, the hosts were walking a tightrope.

England, however, were two tries to the good after fullback Freddie Stewart used all of his elongated frame to stretch for the line despite the feeble efforts of Cobus Reinach and Makazole Mapimpi.

England’s third try came after they punched a gigantic hole through the Springbok midfield in the 65th minute, allowing substitute scrumhalf Raffi Quirk to sprint clear for a try.

Though the Boks grabbed the lead again, that try proved a dagger blow.

Rassie will be missed at Twickenham

Springbok captain Siya Kolisi has lamented the absence of director of rugby and occasional water carrier Rassie Erasmus from the team's clash with ...
Sport
2 weeks ago

Springbok coach Jacques Nienaber has confirmed that winger Sbu Nkosi and utility back Aphelele Fassi have been released from the touring squad to ...
Sport
2 weeks ago

Springboks coach Jacques Nienaber on Tuesday successfully sidestepped the controversial snubbing of SA players by World Rugby in the Player of the ...
Sport
3 weeks ago