Stormers too strong for Cardiff in Cape Town heat 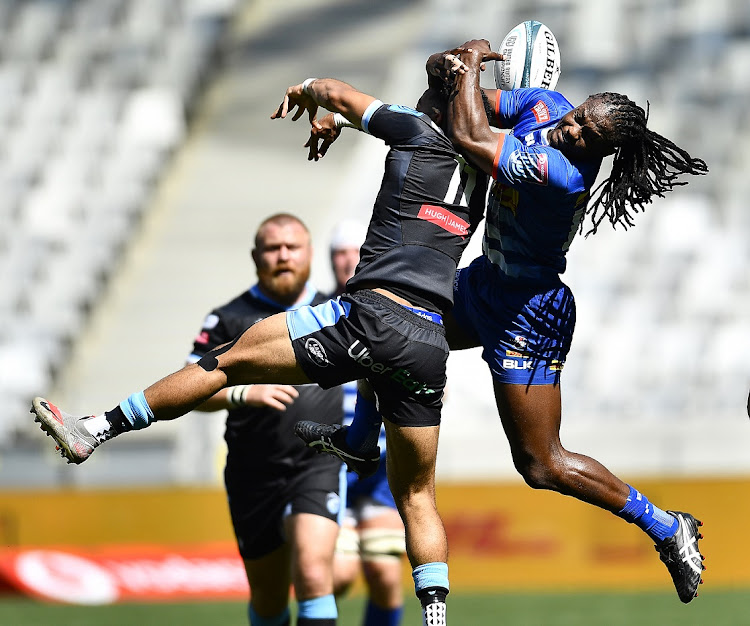 Theo Cabango of Cardiff and Seabelo Senatla of the Stormers during the United Rugby Championship match at Cape Town Stadium on March 20 2022.
Image: Ashley Vlotman/Gallo Images

The Stormers consolidated their position in the top eight of the United Rugby Championship with a 40-3 victory (19-3 at half time) over Cardiff on a hot Sunday afternoon in Cape Town.

The Capetonians were in control for most of the encounter and scored six tries without reply, again defending well, but they stuttered at times and squandered a number of opportunities.

Three tries on each side of the break were more than enough though as the Stormers, whose discipline was also good, moved up one spot on the log to seventh.

Cardiff started the game well and were camped in the Stormers’ half in the first 15 minutes, mainly thanks to some clever tactical kicking, while they also led 3-0 on the scoreboard courtesy of an early penalty goal by Jarrod Evans.

The hosts weathered the storm and when presented attacking opportunities they pounced, with fullback Warrick Gelant instrumental in their three first-half tries.

The Sharks plodded along for much of the first hour before downing Zebre 38-6 in their United Rugby Championship match in Durban on Saturday.
Sport
3 months ago

In the 17th minute, playing from a turnover, the ball was spread wide by Gelant to left-wing Leolin Zas, who chipped and gathered before putting outside centre Ruhan Nel away with an inside pass.

The game never really got going as both teams were guilty of too many unforced errors, but in the 33rd minute Zas was on hand to score the second try of the afternoon. The Stormers again played wide, Gelant fly-hacked the ball forward before right-wing Seabelo Senatla cleverly ‘batted’ it back inside, where his wing-partner was waiting to dot down.

Manie Libbok, who converted the first try, finished the Stormers’ third five-pointer on the stroke of halftime when Gelant chipped over the defensive line and, after some slick handling, the Capetonians’ flyhalf raced away to score under the uprights.

The Stormers failed to fire early in the second half, though, with more line-out woes and some butter fingers costing them a number of scoring opportunities. But they found their groove midway through the half and scored three tries in seven minutes to put the result beyond all doubt.

Replacements Junior Pokomela and Rikus Pretorius scored from turnovers in the 61st and 68th minutes, while No 8 Evan Roos was rewarded for his hard work with a try after a superb run in the 64th minute.

The Bulls powered to a 57-12 United Rugby Championship (URC) win over the Scarlets at Loftus Versfeld on Friday night.
Sport
3 months ago

The news of a season ending injury to captain Jaco Kriel will come as a significant blow to the Lions in the lead-up to their United Rugby ...
Sport
3 months ago

Bulls coach Jake White has described their dominant 57-12 bonus-point win over the Scarlets in their United Rugby Championship (URC) match at Loftus ...
Sport
3 months ago