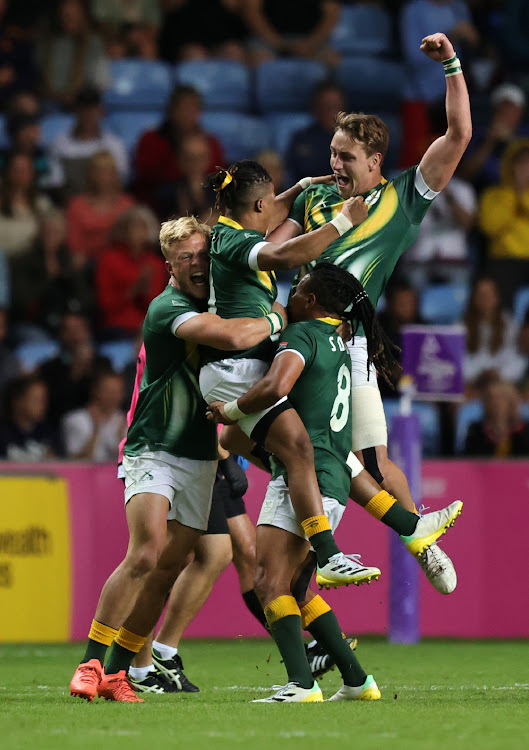 The mighty Blitzboks rampaged through the Olympic champion Fijians 31-7 in Birmingham on Sunday night to claim the Commonwealth Games gold.

It was Team SA’s fourth gold after three days — and the country’s first medal to be claimed outside the swimming pool — lifting the nation to fourth spot on the medals table in Birmingham.

This was only the second time SA had won the rugby sevens competition after Glasgow 2014.

The contest promised to be a clash for the ages: the magicians of attack against the best defensive outfit in the competition. This was supposed to be the irresistible force against the immoveable object.

But on this occasion the immoveable object triumphed with room to spare.

Muller du Plessis drew first blood, collecting a cross kick to score in the right corner. SA used the boot with great effectiveness throughout the tournament, especially the grubber.

But the second try came from swinging the ball across the park, from touch line to touch line until JC Pretorius stormed down the right unmarked to put the Blitzboks up 12-0.

Shaun Williams went over in the left corner unmarked soon afterwards to push SA’s advantage to 17-0 by half time.

Chad Le Clos won the 18th Commonwealth Games medal of his career in Birmingham on Sunday, but he lost the 200m butterfly crown he had held since 2010.
Sport
2 weeks ago

Du Plessis eluded one defender to score his second try early in the second half for a 24-0 lead.

When Fiji skipper Waisea Nacuqu scored his side’s first try soon afterwards, they were still too far behind for any fan in a green jersey to worry.

When Mfundo Ndhlovu dotted down at the end, it was the cherry on a cake that was baked with precision and planning.

Angelo Davids scored his third hat-trick of the tournament as the Blitzboks beat Australia 24-12 in their semifinal earlier on Sunday.

This was only the second time since rugby sevens was introduced to the Games in 1998 that New Zealand did not win gold. Reduced to five men, they lost to Fiji on a golden try in extra time, but went on to beat Australia 28-12 for the bronze medal.

Australia drew first blood when Mark Nawaqanitawase broke a tackle and went over in the left corner for a 5-0 lead.

But Angelo Davids levelled matters, collecting a grubber by Selvyn Davids to score a converted try and take the lead late in the first half.

Australia hit back, sending the ball through several pairs of hands before Matthew Gonzalez broke free to score under the posts for a 12-7 advantage.

SA had conceded only one try going into the match, but suddenly they had let through two.

The Blitzboks, however, took full advantage when Australia were reduced to six men when Henry Hutchinson was yellow-carded.

They swung the ball down the line and Davids went over for his second try unmarked to level matters at 12-12 at the break.

Selvyn Davids scored a great opportunist effort early in the second half after charging down an attempted kick upfield, picking up the stray ball and charging through for the line. Ronald Brown converted to push the lead to 19-12.

Angelo Davids rounded off a full line movement from a line-out to go over in the right corner and extend the lead to 24-12. He went over three times in the pool matches against Scotland and Malaysia.

Blast from the past: Boks have Steyn power to beat All Blacks in Durban

In some ways, Wayde van Niekerk came fifth in triumph

Wayde van Niekerk may have missed the 400m podium at the world championships on Saturday, but in some ways he came fifth in triumph.
Sport
3 weeks ago