New PSL season: What are the prospects for a Bloem Celtic side without any money? 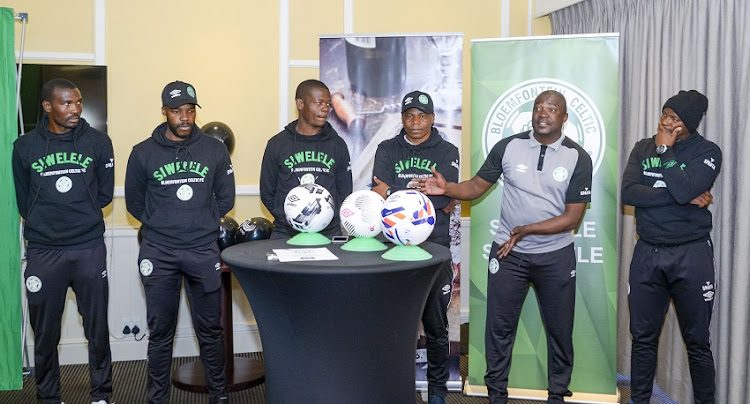 Lehlohonolo Seema (second from the right) announcing the leadership and captains during the Bloemfontein Celtic Kit Launch and Players Unveiling at Tsogo Sun on July 25, 2019 in Bloemfontein, South Africa.
Image: Frikkie Kapp/Gallo Images

Bloemfontein Celtic survived a season of financial turmoil in the previous campaign and it remains to be seen if they will be able shrug off these difficult distractions.

What are the premiership prospects for a club without any money?

Celtic confounded all expectations‚ amid strikes over money and uncertainty over the club’s future‚ to finish in the top eight at the end of the season.

At one stage they were even top of the table but their problems were laid bare when Steve Komphela quit with a long list of complaints about the shoddy modus operandi at the cash-strapped club.

Owner Max Tshabalala has been trying to sell but a deal with Ajax Cape Town was scuppered when the Cape side's Dutch co-owners pulled the plug.

Tshabalala will have to soldier on again and another season of a perilous existence‚ plus supporter dissatisfaction‚ awaits with‚ this time‚ potentially disastrous consequences.

Celtic have replenished the coffers with the departure of the trio of Kabelo Dlamini‚ Tshegofatso Mabaso and Bongani Sam to Orlando Pirates but there has been no money to buy new players.

Instead they have picked up players on free transfers‚ but had to pay for Congo international Harris Tchilimbou from Free State Stars‚ who looks a significant acquisition.

Jackson Mabokgwane will take over from Patrick Tignyemb in goal and there is another chance for 25-year-old Andile Fikizolo to make a mark in the top-flight after failing at Golden Arrows and SuperSport United.

Celtic try to dominate in the midfield when they play at home‚ and even on the road against sides they feel they are the equal of.

But they were very cagey and defensive away against the big boys like champions Mamelodi Sundowns‚ Pirates and Bidvest Wits and will likely look to adopt the same strategy again‚ hoping for counter-attack opportunities.

Celtic are hoping that Neo Maema will step into the role of playmaker this season and looking for more impact from Tebogo Potsane‚ who has become something of an impact player.

The Bloemfontein side meet champions Mamelodi Sundowns twice and Orlando Pirates also in their first month of competition.

Pirates are up first for Celtic‚ away in a tough season opener‚ but will fancy they could yet cause an upset in Soweto‚ where they drew 1-1 in March to help derail Bucs’ title aspirations.

Celtic will then host former coach Komphela and his Golden Arrows side before taking on Sundowns in the MTN8.

That will be away‚ but Sundowns will then play midweek at the end of the month in Bloemfontein in the league.