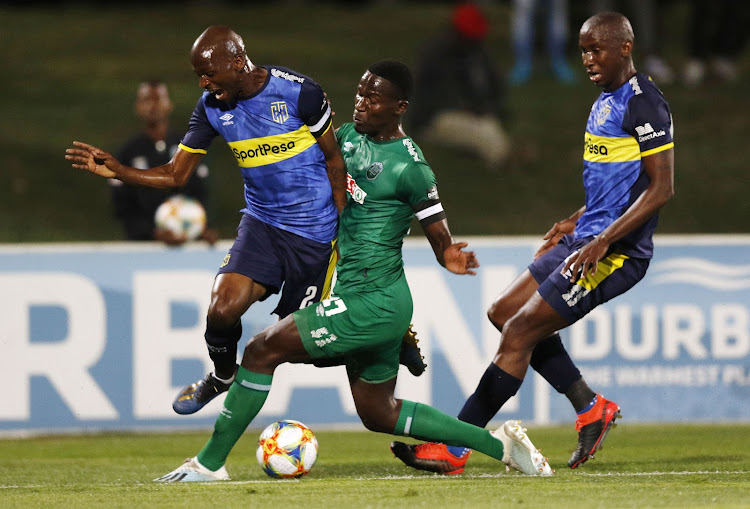 Mark Mayambela's name on the list of starting line came as a surprise to many.
Image: Anesh Debiky/Gallo Images

Mark Mayambela was happy with a debut goal‚ however tenuous his claim to it might be‚ but upset with a loss as he made his Cape Town City debut on Tuesday.

The 32-year-old was signed on the eve of the Premier Soccer League (PSL) clash against AmaZulu in Durban and immediately inserted into the starting line-up‚ hitting the crossbar with his 65th minute effort and then seeing it hit the back of home goalkeeper Siyabonga Mbatha and cross over the line as he and defenders scrambled to get to the ball.

“Scoring the goal was nice but I’m sad that we lost the game.

"To me it wasn’t a good debut but I think we can build from the performance‚” he said after the 2-1 loss at KwaMashu.

“I believe that I’m in the right atmosphere and environment. I’ve been welcomed into the team and I’m very happy and excited because this was my first game since April.”

Mayambela last featured for previous club Chippa United when they lost 2-0 at home in Port Elizabeth to Cape Town City on April 26. He was released weeks later.

“Obviously it’s going to take some time to get used to how the team plays and how the coach wants us to play.

“But I’m working hard and trying to adapt as quick as I can and make sure that I can help the team as well.

“I know that there are a lot of quality players who can help the team succeed and they can take this team to the next level and hopefully I will be part of that.

“I’m grateful also to the chairman (John Comitis) for giving me the opportunity and everyone in the technical team who have been good to me‚ encouraging me and pushing me.

“I believe this could be a good season for me and the club irrespective of the position we find ourselves in at the moment‚” Mayambela added.