Ntseki on Erasmus: 'It’s pressure that we’re putting on him but I know he can deliver' 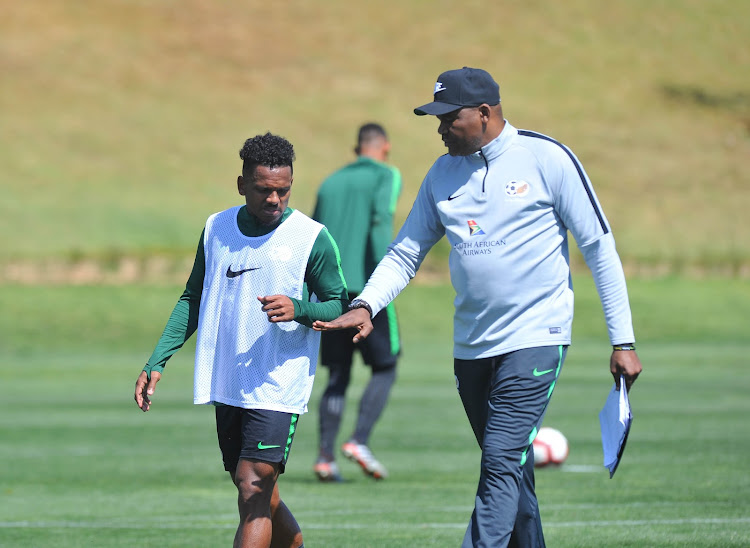 Ntseki showered the Mamelodi Sundowns-bound player with praise as he prepared his team ahead of matches against Namibia on Thursday and Zambia on Sunday at the Royal Bafokeng Sports Palace.

The Bafana coach will use the two friendlies as preparation for the 2021 Africa Cup of Nations qualifiers that will resume with two back-to-back matches against island nation Sao Tome & Principe next month.

“Kermit Erasmus‚ a special player for me because of his ability to score goals. And during the bubble he did very well‚ scoring goals (for his former club Cape Town City).

"It’s pressure that we’re putting on him but I know he can deliver‚” said Ntseki.

After he was announced as Sundowns' 12th signing this week‚ Erasmus will go to these two international matches with a lot to prove.

Impressing new Sundowns co-coaches Manqoba Mngqithi and Rulani Mokwena will also be on his mind as he has very little time to make an impression before his side's MTN 8 quarterfinals fixture against Bloemfontein Celtic on October 18.

“I’m excited to be part of the national team after such a long (11 months) time because of the virus (Covid-19) as well.

"You know there are things (health protocols) that we have to adapt to and hopefully we can display a good performance and get a good result‚” said Erasmus on his inclusion in the national team.

Erasmus will be fighting for a starting berth against Namibia on Sunday alongside Under-23 striker Lyle Foster‚ who was set to arrive in the country from his French club AS Monaco on Tuesday after taking the place of Belgium-based Kurt Abrahams.

Abrahams was withdrawn from the squad with SuperSport United midfielder Sipho Mbule‚ whose place was taken by AmaZulu FC player Sinethemba Sithebe.

Ntseki and the South African Football Association have not yet explained why the two players‚ Abrahams and Mbule‚ had to be pulled out of the squad.

Despite most of the players arriving in camp on Monday‚ their first training session was cancelled due to the heavy downpour in Johannesburg during the day.

“Unfortunately due to persistent heavy rains on Monday we did not get to have our first training session. We’ll be driving to Rustenburg [on Tuesday] and get straight into training when we arrive‚” Ntseki said.

Besides Foster‚ Erasmus could also form a partnership with Portuguese-based Luther Singh and Kaizer Chiefs player Lebogang Manyama as Ntseki selected the Amakhosi playmaker as a striker. He could possibly slot in a role behind the main target man.

“We have selected him (Manyama) as a striker and we will be working to prepare him for the position that we want him to play.

"He has played before as a striker but the role that we’re bringing him to play is a different one‚” said Ntseki on Manyama’s expected role in Bafana."

The 30-year-old Erasmus has played 14 times for the national side and scored the last of his two goals in a Bafana shirt in a 2014 World Cup qualifier against Botswana in 2013.

He was in the team that beat Sudan 1-0 in a 2021 Afcon qualifier in what was Bafana last match in November last year.

After an unhappy spell on the sidelines at Mamelodi Sundowns‚ Aubrey Ngoma has returned to Cape Town City.
Sport
1 year ago