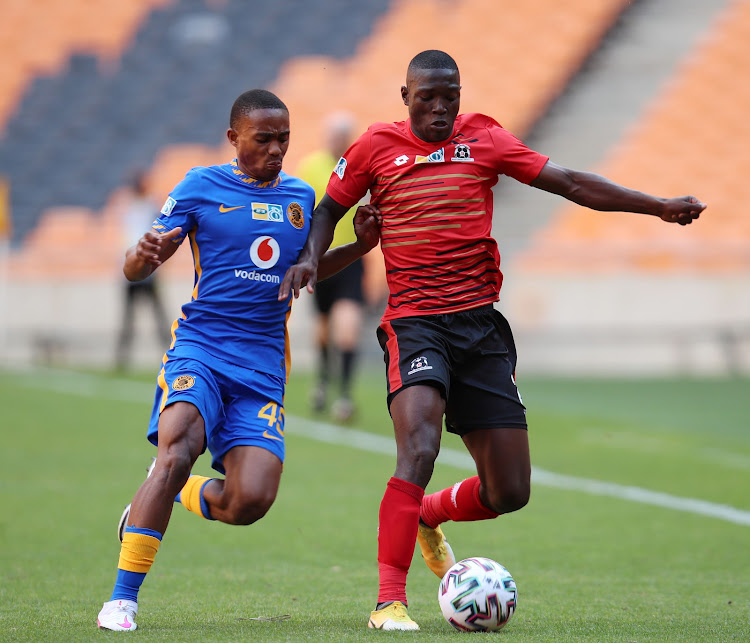 Recently appointed Kaizer Chiefs coach Gavin Hunt is still familiarising himself with his new surroundings but has been in Naturena long enough to know that he has an incredible talent on his hands in Njabulo Blom.

Hunt joined Chiefs on September 17 and while he is still getting to know the many people who call the sprawling facility in the south of Johannesburg home‚ the 20-year-old Blom has already made a huge impression on the wily mentor.

Blom came on as a second half substitute in Chiefs' come-from-behind MTN8 quarterfinal 2-1 win against Maritzburg United on Sunday and while Hunt initially struggled with his name after the game‚ he is unlikely to forget the young defender again after he delivered a masterful display.

“Ja‚ I think he is the future‚ you know I think he has got huge ability.

"I’ve only watched him for a week but I have been really impressed with him."

Hunt raved about the talented player and said he would work with him very closely in the coming weeks.

"I did not want to start him [against Maritzburg on Sunday] and I should have‚ maybe‚ but obviously with hindsight everything is always easy for you‚" Hunt said.

“I thought he's certainly one for me‚ he can cover distances‚ he’s got a great engine and he can play.

"I mean he came on [in the second half] and in the first 30 seconds he played that big long ball to (Bernard) Parker and Parker could have scored.

“So ja‚ he’s got range of passing‚ I mean he's a fullback‚ he's a midfielder and I think he's got it.

"You know it worked [on Sunday] but he is a young player‚ he needs a bit of time and I will give him time.

"I will work with him and show him a few things‚ and we will see how it goes."

Hunt's hands are tired at the moment as he cannot refresh the Chiefs squad and bring in new personnel.

The Chiefs coach has to make do with the same squad that finished as runners-up to champions Mamelodi Sundowns last season and he has had to find creative ways to make the best out of a tricky situation.

While rivals Sundowns‚ Orlando Pirates and many others have been splashing out on new players‚ Chiefs cannot go anywhere near the transfer market as they are awaiting the outcome of the appeal they made at the Court of Arbitration for Sport (CAS) on the two -window transfer ban the club had slapped on them by Fifa regarding the Madagascan midfielder Andriamirado “Dax” Andrianarimanana.

Chiefs presented their case to CAS on September 8 and 9.

Fifa imposed the ban on Chiefs in February‚ after Amakhosi were found guilty of signing "Dax" in 2018 when the Madagascan already had a contract with Fosa Juniors in his home country.

Hunt has turned to senior players like Parker during these tricky times and the much vilified player looked a breath of fresh air under new instructions on Sunday.

Leonardo Castro and Khama Billiat will also be expected to lead from the front as the club continues to wait for CAS to announce a decision.

"Obviously we brought on [Leonardo] Castro [against Maritzburg] who has not trained at all‚" Hunt said.

"You know‚ I think he trained maybe one or two days since I have been here‚ so he has not done anything.

"You can see he is not fit‚ I did not think he was going to last 45 minutes. I thought I was going to have to take him off if we went to extra time.

"At least he gave us something to play towards and we looked much better with Billiat in and around there. So it was good‚ much better.

Chiefs open their account in the league on Saturday when they host Sundowns at FNB Stadium.

Former Bafana Bafana and Kaizer Chiefs stalwart Siphiwe Tshabalala headlined the raft of players who were unveiled by AmaZulu on Monday.
Sport
11 months ago