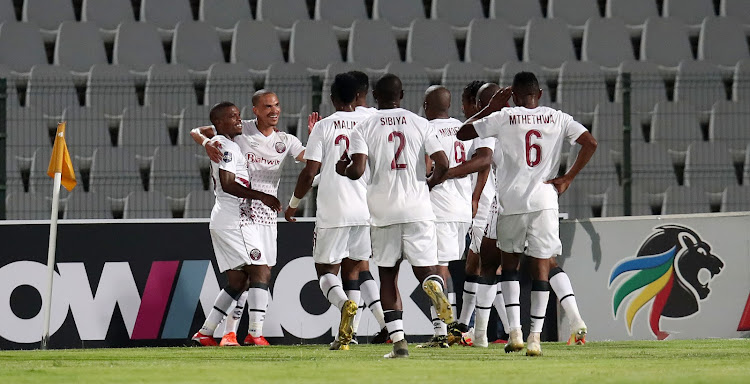 The Soweto club walked away with maximum points thanks to an own by the visitors.
Image: Muzi Ntombela/BackpagePix

Newly promoted Swallows FC registered their first three points in their second match, a first one at home, since gaining promotion to the DStv Premiership when they defeated Bloemfontein Celtic 1-0 at the Dobsonville Stadium on Wednesday night.

The Birds will thank Celtic’s unlucky defender Ronald Pfumbidzai who turned Ruzaigh Gamildien’s cross into his own net in the 82nd minute.

There was a touch of luck for the Birds in earning their first full spoils, to add to the one they gained in their 1-1 draw against Stellenbosch FC in their opening match on Sunday, as Gamildien looked offside before delivering the cross from the left that Pfumbidzai couldn’t help but drive past his own goalkeeper Sipho Chaine.

Although Celtic didn’t deserve the full points as Swallows dominated the proceedings throughout, they will still feel aggrieved as they also saw Lantshene Phalane’s great header disallowed for offside when the midfielder was clearly onside, a few minutes before Swallows broke the deadlock.

Swallows coach Brandon Truter made only two changes to the team that started against Stellenbosch on Sunday while John Maduka, whose team is facing SuperSport United in the MTN8 first leg semi-final on Sunday, introduced five new players in his starting XI.

Swallows looked the better team in the first 45 minutes even though they were not creating clear cut chances despite having Thabiso Mosadi, Gamildien and Zephaniah Mbokoma in their attack that was backed by Given Thibedi, skipper Lebogang Mokoena and the industrious man-of-the-match Tlakusani Mthethwa in the midfield.

In Vuyo Mere on the right and Keegan Richie on the left, Truter had the roving wingbacks supporting the team when they were in attack.

Pushing for Birds’ first three points after their return from the wilderness that lasted five years, Swallows coach introduced Kagiso Malinga for Mosadi up front and pulled out Richie who accumulated a yellow card in the first stanza for Mthokozisi Shwabule, at the restart.

It was Mthethwa who came close to really testing Chaine in the visitors’ goals, but was unlucky to see his shot just outside the area sailing over the bar.

Gamildien will be also disappointed that he didn’t register his second goal in second successive matches in the Swallows shirt as he had the best chance of the match after Mere delivered a delicious cross for him on the right but the striker headed over the bar with just 25 minutes remaining on the clock.

Thibedi came close with a long range strike that missed the goalpost by a few inches in the 75th minute as Swallows continued to control the game before they got the all-important goal eight minutes before time.

Having seen his side suffer a first defeat in the league this season, Maduka will now shift his focus to the away semi-final clash against SuperSport United at the Lucas Moripe Stadium on Sunday.

For Truter it will be back to sharpening his charges for at least six days before they meet Tshakhuma Tsha Madzivhandila away in Limpopo next Wednesday.

As five men linked to the murder of Senzo Meyiwa appeared at the Boksburg magistrate's court on Tuesday, a video of a soccer fan who says he can't ...
Sport
7 months ago

Safa have come out to defend and clarify their unusual decision of announcing the Bafana Bafana squad at 10pm and exclusively to SABC on Monday ...
Sport
7 months ago

President Cyril Ramaphosa has welcomed the arrest of five people implicated in the 2014 murder of soccer player Senzo Meyiwa.
News
7 months ago

The family of murdered soccer player Senzo Meyiwa on Tuesday said they were shocked by the incidents that unfolded at the Boksburg magistrate’s court ...
News
7 months ago