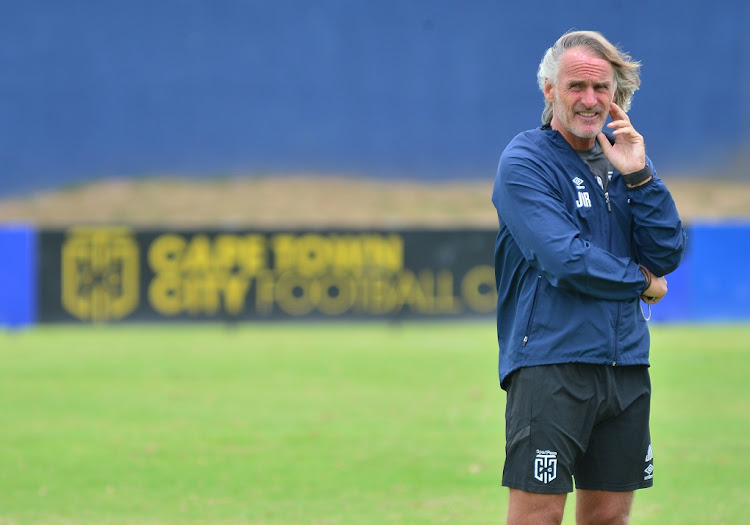 Coach Jan Olde Riekerink says his team will miss Kermit Erasmus goals but said the striker's departure is an opportunity for other players to show their mettle.
Image: Grant Pitcher/Gallo Images

Kermit Erasmus tormented Mamelodi Sundowns when he was at Cape Town City.

Now that the roles have been reversed with Erasmus at the defending league champions these days‚ City coach Jan Olde Riekerink has to make plans to contain his former star forward when the teams meet on Wednesday.

Kermit opened his account for Sundowns when they beat Kaizer Chiefs 3-0 in the season’s opening game‚ but City are one team that’s continued to give the Brazilians a lot of grief.

Riekerink knows what he’s lost in Erasmus moving north‚ but also understands that football is also about evolution and moving on.

“Kermit is a fantastic guy and everyone will love to see him play.

"He’s a goal scorer‚ so we’ll miss the goals.

"However‚ we have some players who can fill that gap and some other players have to stand up and show themselves.

"We have options and the ball is in their side and they have another opportunity‚” Riekerink said.

Another player who could’ve given Sundowns grief is Aubrey Ngoma.

He transferred to the Brazilians‚ but came back after a frustrating spell on the sidelines as Sundowns’ strength in depth prevented him from breaking through.

Riekerink said Ngoma‚ who played a crucial role in helping the Citizens get to third in their first season‚ won’t be fit for Wednesday.

“He didn’t play for a long time‚ but when he started here‚ he had a muscle problem. He also wasn’t with the squad for the other matches.

"He’ll have his moment though and he’ll be ready. I’ve seen videos of him.

"He’s older and experienced now and he also wants to play. He’s skilful and smart‚ but he’ll also have to battle to get into the team‚” Riekerink said.

Riekerink also said he wasn’t worried by the fact that the five-substitute rule benefits a team like Sundowns with their better depth.

While City’s depth hasn’t been tested yet‚ Riekerink said he has enough quality at his disposal.

“I haven’t thought much about it and in my team; we have more than 11 good players. We also have an opportunity to change something or try something different.

"You’d find that the best 11 from each team often plays and that often goes in for around 60 minutes.

"You may have a bigger squad‚ but five substitutions are five‚ but I trust my group with the fact that we have more than 11 players‚” Riekerink said.

SuperSport United coach Kaitano Tembo has said striker Bradley Grobler is still in a good headspace despite the player’s purported move to Orlando ...
Sport
1 year ago

Fresh from a MTN8 encounter where Orlando Pirates consummately defeated them‚ Kaizer Chiefs have to navigate past what could be a potential banana ...
Sport
1 year ago