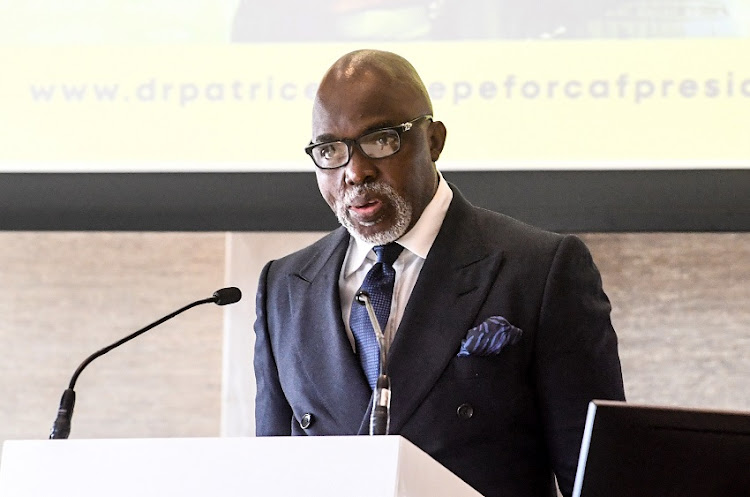 Influential Nigeria Football Federation president Amaju Pinnick has said that he expects Patrice Motsepe to win “35 to 40” of the 54 votes in the Confederation of African Football’s (Caf) presidential election on March 12.

Pinnick has campaigned for Motsepe in the Mamelodi Sundowns owner’s candidacy against Jacques Anouma of Ivory Coast‚ Augustin Senghor of Senegal and Mauritanian Ahmed Yahya‚ to be decided in Caf’s elective congress in Rabat‚ Morocco.

Both were influential‚ along with SA Football Association (Safa) and Caf vice-president Danny Jordaan‚ in Madagascan Ahmad Ahmad unseating 29-year incumbent Issa Hayatou in the Caf elections of March 2017 in Addis Ababa‚ Ethiopia.

Ahmad was banned from football for five years by Fifa for ethics violations in November.

Chiyangwa‚ a panellist at Motsepe’s launch‚ restated Cosafa’s decision to vote as a block of the 14 Southern African FAs for the South African mining magnate‚ which was confirmed at their annual general meeting (AGM) in Johannesburg on Sunday.

Chiyangwa then called Pinnick to the podium‚ asking him to state the “numbers we are looking at” regarding votes expected for Motsepe’s candidacy.

“The truth is you can see me in South Africa very regularly. I’m super-excited because for the first time in football in the continent‚ Africa is about to get it right‚” Pinnick said.

“I’m happy because two faces I’m seeing here today‚ either of them would have been the perfect fit for the president of Caf – my brother Moise Katumbi [owner of TP Mazembe in Democratic Republic of the Congo] and Patrice Motsepe.

“So when you say you [Cosafa] are giving 14 votes – and I said this during Ahmad’s campaign where he got 35 votes – that by God’s grace we are looking at 40 votes [for Motsepe].

“When I’m working with him the number he gives is what we aspire to achieve‚” the Cosafa boss said.

“The last time we had Ahmad we had 35 – for sure that was what we predicted in Harare.”

It was at a 58th birthday party function of Chiyangwa in Harare on February 24 2017‚ attended by 24 African FA heads and seen as a front to campaign for Ahmad‚ that the movement to unseat Hayatou apparently solidified its ambitions.

The party in Harare was controversially attended by Fifa president Gianni Infantino‚ which was seen at the time as backing the Ahmad camp.

Motsepe’s campaign has moved to distance itself from speculation that the Sundowns boss is Fifa’s preferred candidate.

Motsepe and Jordaan confident they won't suffer Chiefs' fate: we will get visas to Morocco