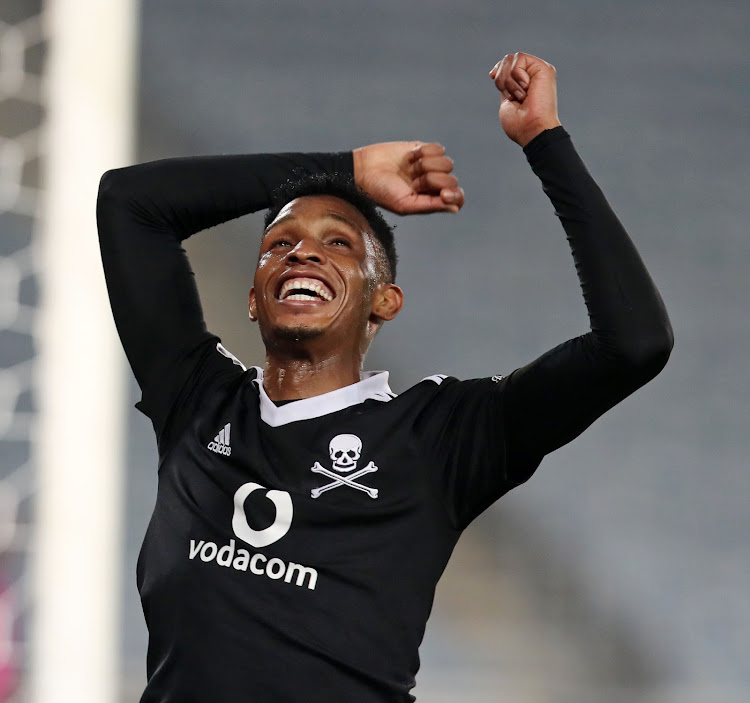 Vincent Pule came off the bench in the second half and scored two goals.
Image: Muzi Ntombela/BackpagePix

Orlando Pirates bounced back from their disheartening cup exit with a 2-0 DStv Premiership win over Maritzburg United on Sunday evening.

After crashing out of the Nedbank Cup at the expense of Mamelodi Sundowns on Thursday‚ the Buccaneers regrouped with a second half brace from substitute Vincent Pule to seal the much needed win at Orlando Stadium.

With the win‚ Pirates moved to fourth spot on the log standings with 38 points after 22 matches and they trail defending champions and leaders Sundowns‚ who have played two less‚ by eight points.

They trail third placed Golden Arrows‚ also on 38 points‚ due to a slightly inferior goal difference with high-flying AmaZulu sitting pretty on second spot on 40 points.

The visitors from Pietermaritzburg‚ who last played a match on April 3‚ looked the fresher side and should have opened the scoring early on with Dylan Claasen and Bongokuhle Hlongwane spooning good chances.

Pirates took time to get into their groove and as soon as they did Deon Hotto was presented with two glorious opportunities late in the first half but the Namibian international could not find the back of the net on both occasions with only the keeper to beat.

Pirates coach Josef Zinnbauer rang changes and brought in Pule for holding midfielder Ben Motshwari at the start of the second half and the move proved to be a masterstroke as the attacker got at the end of a beautiful team move to smash home the opening goal in the 59th minute.

Pule completed his brace in the 78th minute‚ capitalising from a blunder by Maritzburg German keeper Marcel Engelhardt to take the wind out of the visitor’s sails.

Maritzburg coach Ernst Middendorp would be disappointed with the result but pleased with the way his team put up a fight away from home against a quality side.

The defeat leaves Maritzburg stuck in 13th place on 20 points from 21 matches‚ a good seven points away from automatic relegation danger but the three points buffer between them and 15th placed Chippa United would be a headache for coach Middendorp.

Maritzburg will have another opportunity to pull clear of danger when they host Baroka at Harry Gwala Stadium in their next match on Friday.

Pirates will face off in the Soweto derby against Swallows on Saturday in Dobsonville but first they have Caf Confederation Cup group stage match against ES Setif at Orlando on Wednesday.

The Buccaneers go in this penultimate Confederation Cup group stage clash top of Group A on eight points from four matches and a win over the Algerians will almost guarantee them a place in the knockout rounds.

The SA Football Association’s technical committee are expected to report their recommendations for the next Bafana Bafana coach to the NEC next ...
Sport
1 year ago

Mamelodi Sundowns will not rest players for their Nedbank Cup‚ semifinal clash against unpredictable Tshakhuma Tsha Madzivhandila (TTM) at Loftus on ...
Sport
1 year ago

Tshakhuma Tsha Madzivhandila (TTM) caused one of the biggest upsets in recent history by dumping defending champions Mamelodi Sundowns out of the ...
Sport
1 year ago

Kaizer Chiefs coach Gavin Hunt was disappointed that they did not get a penalty in the first half in their drawn DStv Premiership match against ...
Sport
1 year ago

After the heavy 4-1 loss to Mamelodi Sundowns‚ Orlando Pirates coach Josef Zinnbauer has turned his attention to the final push in the DStv ...
Sport
1 year ago