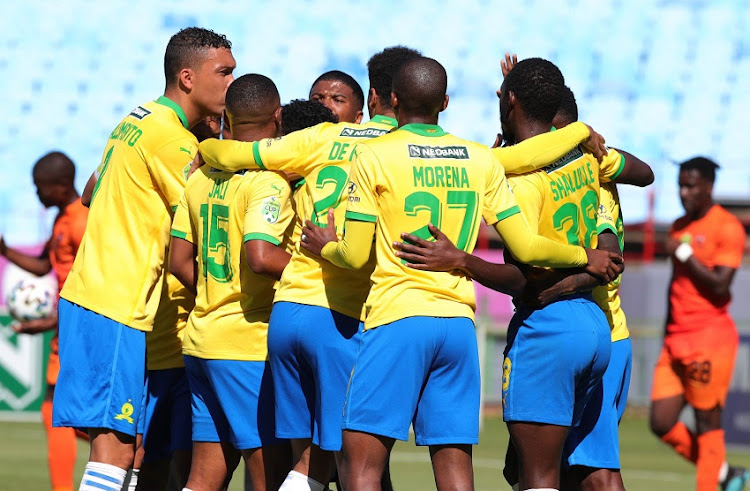 Mamelodi Sundowns are on course for a treble.
Image: Backpagepix

Mamelodi Sundowns will not rest players for their Nedbank Cup‚ semifinal clash against unpredictable Tshakhuma Tsha Madzivhandila (TTM) at Loftus on Sunday afternoon.

The Brazilians will be playing in their fourth match in ten days in all competitions when they line up against TTM but coach Manqoba Mngqithi indicated that they will not tinker too much with the team that demolished Orlando Pirates 4-1 on Thursday.

“I do not think we will rest any players for the next coming matches‚” he said.

“The reason we played the team that we played against CR Belouizdad of Algeria in the Champions League last week is that because at the back of our minds we were already looking at the three to four matches against Chippa United‚ Pirates‚ potentially TTM and Maritzburg United.

“There is also a match against AmaZulu on Wednesday‚ so we took a risk of not playing most of our players in that game against CR Belouizdad because we thought we could still get something of that match without most of the players.

The SA Football Association’s technical committee are expected to report their recommendations for the next Bafana Bafana coach to the NEC next ...
Sport
1 year ago

If they overcome TTM‚ Sundowns will be favourites to defend their trophy against Chippa United in the final and they are also leading the pack in the DStv Premiership but Mngqithi said they are not a finished article.

“If you were a well-oiled machine‚ you would not have had so many counter attacks in the match against Pirates and we have lost too many balls.

“I was talking about this even at the beginning of the season that as a coach I don’t find joy in players losing possession cheap.

“I know when you lose possession you are exposing your limitations defensively and you are challenging the team physically.

“I think that is the one area for me that we still have to improve a lot on. I still believe that at times we become casual and we commit silly mistakes.

“Not mistakes because opponents are putting pressure‚ but a lot of enforced errors that result in turnovers.

“If you can check the goal that we conceded‚ we were attacking and already had a chance with Peter (Shalulile) receiving the ball and if we were more precise we would not have conceded the goal.

“We have expectations of trying to break the line with the number eights taking the spaces and to try and dislocate the centre backs into wrong positions so that when we come back, we can have better possibilities inside the box.

“Sometimes we don’t do that‚ we are prone to playing feeds when there are possibilities to make life a little bit difficult for the opponents and force them to be caught in wrong defensive positions.”

Though they put four past Pirates on Thursday‚ Mngqithi said they have often lacked the killer instinct in front of goal in most of the matches.

“There is still so much‚ again we were not shrewd enough against Pirates. This is the same team that created so many chances against Chippa on Monday but how many goals did we score.

“We struggled to score goals and you must remember we are using these games as preparations for the Champions League.

“We are an unfortunate team at times because if you check Black Leopards that we played against‚ they had one chance and they managed to salvage a draw and get something out of nothing.

“It is always to stay more focused because for whatever reasons teams that we play against don’t miss as much as we do and that creates a lot of problems for us.”

Chippa United are into their first-ever cup final, riding their luck and taking a rare chance to edge Saturday’s Nedbank Cup semifinal against plucky ...
Sport
1 year ago

After the thumping 4-1 victory over rivals Orlando Pirates in the Nedbank Cup quarter final at Loftus on Thursday‚ Mamelodi Sundowns coach Manqoba ...
Sport
1 year ago

The Buccaneers suffered a 4-1 loss against Sundowns.
Sport
1 year ago