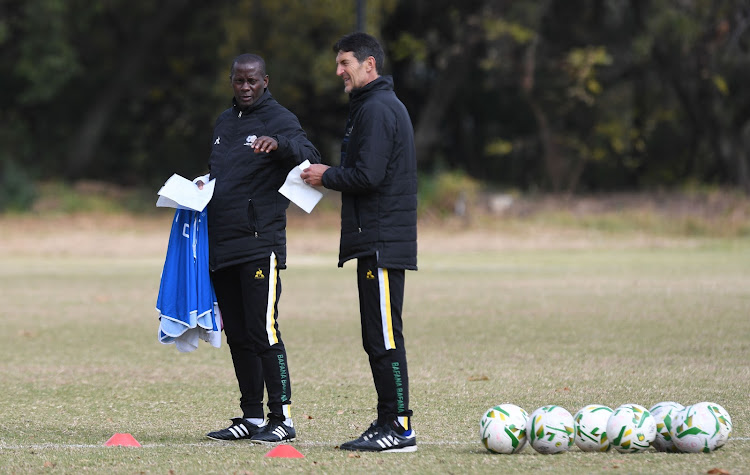 Bafana Bafana first assistant coach Čedomir Janevski has warned that Uganda are a dangerous counter-attacking team that can also hurt their opponents from dead-ball situations.

Bafana host the Cranes in an international friendly in Soweto on Thursday at 6pm and Janevski said a swot analysis had already been done on the Ugandans ahead of the match at Orlando Stadium.

“Of course we saw some of their games with the technical staff together with our head coach and our analyst coach and we analysed their strong and weak points‚” said the 59-year Janevski‚ who played for Yugoslavia and Macedonia and also previously coached Cypriot club Olympiakos Nicosia.

Bafana assembled on Sunday and will have only three days for preparation — and while Janevski said that was not ideal, he did not want to use it as an excuse.

“We are going to prepare in the short period as much as possible to get a good result against Uganda‚ who will be motivated to get a result against us. They are a strong team‚ really good in defence and with lots of tall players.

“They are especially good in the counter-attack and in dead-ball situations because they have tall players.”

Janevski said the approach from Bafana will be to prevent the Ugandans from using their height advantage.

“We have to be clever and avoid early crosses from both wings to prevent the ball coming into our box‚ which can be dangerous.

“I hope after tomorrow [Tuesday] we will go with a specific tactic to work around.”

The two nations failed to qualify for the Africa Cup of Nations (Afcon) finals to be held in Cameroon in January next year and will use the friendly match to prepare ahead of the Qatar 2022 Fifa World Cup qualifiers‚ which will start in September.

“We open the new page. We will have meetings again to talk to prepare us‚ not just physically but mentally to be strong for the next days and the game and also for the next qualification games which are coming very soon in September.”

Bafana’s new era under Hugo Broos has had a rocky start after the team was dealt a huge blow on Monday.

England-based talismanic forward Percy Tau and SuperSport United midfielders Teboho Mokoena and Sipho Mbule were ruled out of match due to Covid-19, while Mamelodi Sundowns defender Mosa Lebusa and teammates Rivaldo Coetzee and Mothobi Mvala were also ruled out owing to injuries.

Defender of the season Njabulo Ngcobo of Swallows FC‚ the Baroka FC duo of Denwin Farmer and Evidence Makgopa and TS Galaxy’s Ethan Brooks were named as the replacements.

The 69-year-old Broos is in his home country to administer Covid-19 vaccinations and will sit out Bafana's first match under his regime as coach.

Janevski‚ however‚ said Broos has been in constant touch with him and second assistant coach Helman Mkhalele.

“We are in contact [with Broos] daily. Even half an hour ago also we spoke on the phone‚” Janevski said.

“He also few weeks ago made more list [of 19 players] to be sure in case like it happens now with injury or Covid.”

The Peter Shalulile fairytale continued after the Mamelodi Sundowns striker was named Footballer of the Season and DStv Premiership Player’s Player ...
Sport
7 months ago

Mandla Ncikazi says he is proud of the work put in by his Lamontville Golden Arrows squad‚ the staff in the office and the technical team as the ...
Sport
7 months ago

Chippa United's descent into the ignominy of the Premier Soccer League's (PSL) relegation playoffs at the weekend will not come as a surprise to ...
Sport
7 months ago