“This submission is about the firm suspicion, maybe even conviction now that the report is there, that the match was unlawfully manipulated,” said the referee 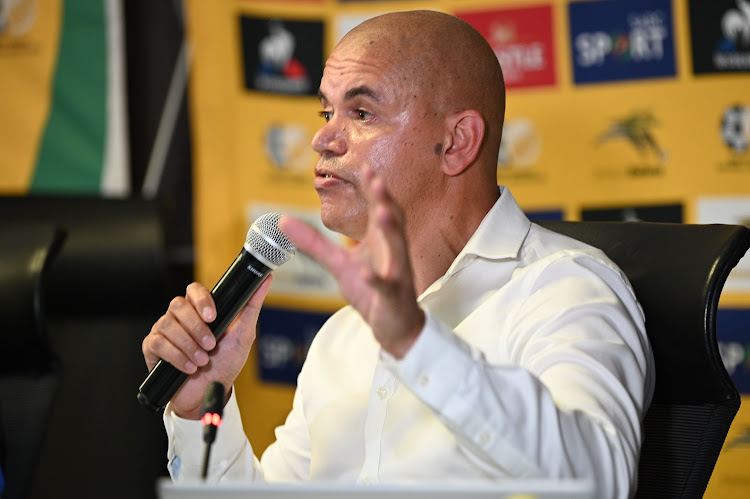 Former international referee Andile “Ace” Ncobo has given a devastating report on the officiating of referee Maguette N'Diaye and his assistants - a report he says proves a definite pattern of extreme bias in the World Cup qualifier between Bafana Bafana and Ghana on Sunday.

Ncobo said his report shows that 90.9% of the incorrect decisions, of which there were an unusually high proportion, went against Bafana in the decisive 2022 World Cup Group G qualifier. He said this proves the game was “unlawfully manipulated” and that, in terms of Fifa rules, the result of a 1-0 win to Ghana should be made null and void.

Safa have asked global body Fifa to investigate the officiating of Senegalese ref N'Diaye, including the highly-disputed penalty from which Andre Ayew scored the 33rd-minute goal that saw Ghana (level on 13 points and a +4 goal difference with SA) progress on most goals scored.

Safa president Danny Jordaan said in Wednesday's press conference at Safa House in Nasrec that Ncobo's report would be included in their submission to Fifa.

Ncobo stressed Safa's submission would not be “about the penalty decision”.

“This submission is about the firm suspicion, maybe even conviction now that the report is there, that the match was unlawfully manipulated,” he said.

Ncobo said Safa's submission was based on the Fifa Disciplinary Code’s Article 18.1, which states that, “anyone who ... influences or manipulates the course, result or any other aspect of a match ... shall be sanctioned with a five-year ban”.

He said: “The moment Fifa decides that person needs to be sanctioned because there is verifiable proof they unlawfully influenced or manipulated the match, then it goes without saying that the result becomes null and void.”

Ncobo gave a detailed breakdown of how he came to the conclusion there had been extreme bias towards Ghana.

He said, reviewing the television footage, he “looked at the match second by second and logged all the incidents that required the intervention of the referee”.

“We disregarded minor incidents such as ball out of play for a throw-in ... We looked at only major incidents, and there were 71 in total. The bulk of those were in the first half.

Safa is on Wednesday giving an update on a complaint over Bafana Bafana's World Cup qualifier against Ghana.
Sport
6 months ago

“We then looked at, of the 71, how many the referee blew for, [before] the stage where we look at what the decision was, who it was in favour of and the correctness or otherwise.

“Of this 71, there were 21 incidents where there was no flag or whistle. They were either ignored or not seen. Those count as incorrect decisions.

“ ... And out of the 71, 47 were awarded. Still at this stage we have not made a judgment on the correctness or otherwise of the decisions that were taken.

“The number of correct decisions was 37 out of 71, which gives you an overall assessment of the referee and his team of 52.1% [correct].

“Go to any country and ask what fellow referees say to a referee who has received 60 or 65% — they will tell him he was poor in that match.

“The number of incorrect decisions is 33 out of 71. Still we are talking about incompetence — we haven't touched on bias.

“ ... When you look at the split of incorrect decisions between the teams, theoretically if it's a poor day at the office for the ref it should still be 50/50.

“It's impossible to get an exactly 50/50 split, so even 45/55 is still not regarded as bias. Even 60/40 would be regarded as slight bias, and you can't be holding press conferences and writing to Fifa about it. It is only when you reach your 70/30s that you start looking at an extreme bias.

“ ... Of the 33 incorrect decisions, 30 went against SA, which accounts for 90.9% of incorrect decisions that I have no fear of anyone looking at the match and at this report and saying, 'No, the referee was right where you said he was wrong'.”

Ncobo said where, because of the footage, he could not determine correctness he marked the decision inconclusive.

Further, Ncobo said he found that in the first half N'Diaye got only 37.8% (17 out of 45) decisions correct, and in the second 76.9%, which “reminds us why this ref is on the international panel ... because he has the ability to reach that kind of performance”.

He explained the second-half improvement as stemming from a “sense of comfort that the outcome of the deliberate bias has been to a certain extent achieved”.

He said initially the second-half decisions were all “suddenly correct”, but the incorrect decisions resumed from a point around the 75th-minute of a “renewed vigour on the part of the Bafana players realising they were losing this thing”. All five incorrect decisions in the second half went against Bafana, Ncobo's report alleges.

Ncobo said he tested his report by giving a draft to “respected” fellow ex-referees, including “at least one who I know is a super-apologist for referees”. He said that particular ex-referee came back with a lower figure than 90.9% incorrect decisions, but only reduced to 89.7%.

Safa have confirmed Fifa have yet to respond to the association on their request for an investigation.

Cape Town City coach Eric Tinkler has said his ex-player, Rushine de Reuck, needs to “be strong” to bounce back from being at the wrong end of an ...
Sport
6 months ago

EFF deputy president and avid football fan Floyd Shivambu has called on Fifa to establish a process to overturn “irrational decisions” after Bafana ...
Sport
6 months ago

POLL | Bafana heartbreak in Ghana, but was it really a penalty?

The SA Football Association's (Safa) complaint about the performance of Senegalese referee Maguette Ndiaye and his colleagues during Bafana Bafana's ...
Sport
6 months ago