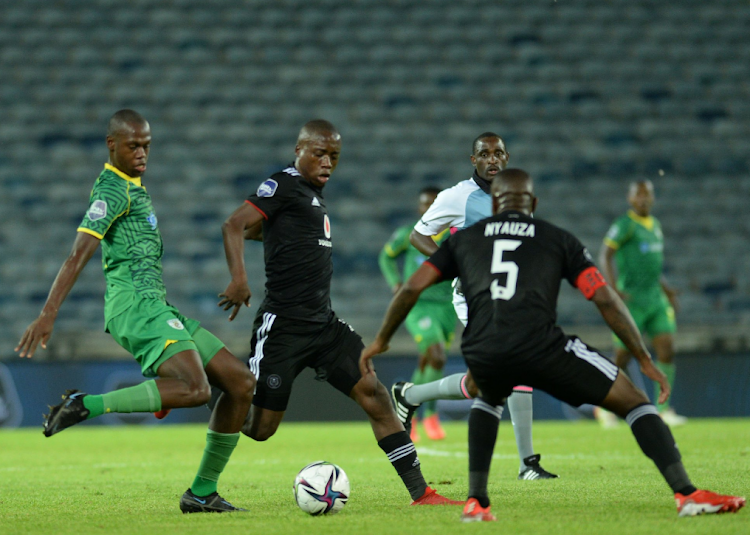 Missed chances and a gritty, fighting performance from Baroka FC saw Orlando Pirates having to settle for a 0-0 DStv Premiership draw at Orlando Stadium on Thursday night.

Bakgakga shored up their shape considerably, which Bucs were unable to pick a path through, in the second 45 minutes.

The match was delayed by 30 minutes to an 8pm kickoff because the Pirates bus was held up on entry to the stadium by traffic conditions resulting from service delivery protests around Orlando Stadium.

Pirates' signs of form have come in stages. After a battling start and the adjustment from Josef Zinnbauer to co-coaches Mandla Ncikazi and Fadlu Davids, they stabilised gradually with a win and four draws in five league and cup matches, and then three wins a defeat and a draw from the next five.

Bucs, in seventh place coming into the game, had scored five games in two wins, their 3-0 away league win against Stellenbosch FC then 2-0 Caf Confederation Cup victory against LPRC Oilers in Liberia on Sunday.

Third-last Baroka's struggles had seen the return of the club's much-loved Kgoloko Thobejane as coach to replace Matsemela Thoka, but that did not stop Bakgakga slipping to a second defeat in succession, 3-2 against Golden Arrows in Durban on Sunday. The Polokwane team have won just twice in 13 matches.

The side on form and running out on their smooth Orlando home turf came out a whirlwind of bewildering movement and class touches that overwhelmed everyone in Baroka except Masuluke in an opening half-hour where it was remarkable that Bucs could not score.

A Linda Mntambo back-heel on the left early on teed up Kwame Peprah for a shot that skewed into centreback Bonginkosi Makume, who could only clear as far as Fortune Makaringe to control with his right and drive with his left, Masuluke making the diving stop.

From Olisa Ndah's punt upfield from in his half on the left Makume ducked, unaware of Deon Hotto's run in behind him on the left, Masuluke coming off his line and spreading his considerable frame to make the stop. Hotto stretched to the loose ball and steered wide across the face of an open goal.

Ben Motshwari's drive was fisted away by Masuluke. From Makaringe's well-shaped cross Peprah eluded marker Phelelani Shozi getting up powerfully, but directed his header over.

Pirates' coaches brought on Kwanda Mngonyama and Tshegofatsho Mabasa for Bandile Shandu and Peprah in a double change from the break.

It was Baroka, though, who might have snatched the lead decidedly against the run of play, winger Nhlanhla Mgaga's free-kick curled in from the left threatening to loop in over the head of Siyabonga Mpontshane, Bucs' keeper having to palm on to his crossbar.

Baroka's medium press higher upfield and improved harassment in the middle made it far tougher for Bucs to dictate terms and penetrate back after the break.

Having failed to get three points in his first match in charge against Golden Arrows a few days ago, Baroka coach Kgoloko Thobejane has now turned ...
Sport
7 months ago

In what looks like a move to pave the way for some sort of normality by the Premier Soccer League (PSL), late kickoffs are returning to programming ...
Sport
7 months ago

Orlando Pirates continued to go about their business on the continent quietly when they beat LRPC Oilers of Liberia 2-0 in an away encounter at ...
Sport
7 months ago

Joy “Mama Joy” Chauke is all her characteristic belly laugh and high spirits as she grins and bears the backlash she has had from Orlando Pirates ...
Sport
7 months ago