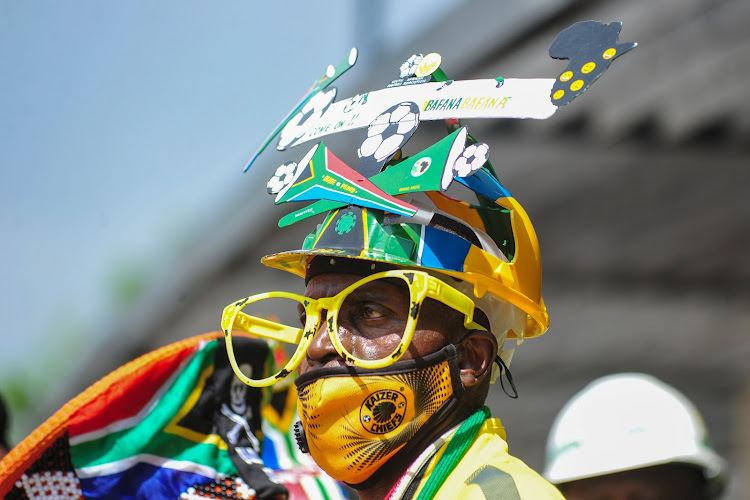 Kaizer Chiefs superfan Saddam Maake at the "Return to Play: It's in Your Hands" vaccination social mobilisation campaign at Moses Mabhida Stadium in Durban on October 8 2021.
Image: Gallo Images/Darren Stewart

Kaizer Chiefs superfan Saddam Maake says he understands and supports Joy “Mama Joy” Chauke's decision to leave Orlando Pirates and become a Royal AM fan, but that he could never make the same kind of move from Amakhosi.

Maake said as a child he had a similar experience to Chauke, who chose to support Pirates even though she grew up in a Chiefs household. The 63-year-old Chiefs fan said he rebelled against his Moroka Swallows-supporting family to be an Amakhosi supporter.

Maake said he respects the bravery of Chauke's choice to leave Pirates. But he also said he could never make a similar decision.

“We supporters are not employed by the teams, we just go there for the love of the game to put the passion for the team. It's only a few supporters — I can count them — who are working at their clubs,” Maake told TimesLIVE.

“Most fans support the team because they love the team. We understand 100% that the teams make us loyal, make us celebrities, make us heroes.

“Many big teams have come to me to ask me to come and support their team, I said 'no'.

“Chiefs is my home. Now I can't change, especially with my age, I can't leave Kaizer Chiefs. Even Sekhukhune United called me, I said, 'No, you can rather take my son, Cellular'. Cellular is doing a good job and helping them market their club.

“Unless you call me to say come help us as supporters, as supporters' co-ordinator [for Safa] to tell us how to market the launch a brand, how to behave — because I am doing that at Bafana Bafana But to join a team as a supporter, I can't.”

“But now, for Joy, I think it's good for her to go there [to Royal]. Because I called her and asked her, and she explained it to me.

“She told me, 'I want to go there because the poor lady [Royal owner Shauwn Mkhize] was struggling to come up through the First Division, and she even bought Celtic, which shows her commitment to soccer'. And that's why I support her.

“Because remember she's got two sons, and she's the one who must put bread and butter on the table for them.

“She doesn't need to get her clearance, she's a free agent. This is her choice, we must say, 'All right, good luck, well done'.

Joy “Mama Joy” Chauke is all her characteristic belly laugh and high spirits as she grins and bears the backlash she has had from Orlando Pirates ...
Sport
1 month ago

“I didn't ask her everything, but I know she doesn't hate Pirates or whatever. This is happening, so people must respect her choice.

“Because she's a woman, MaMkhize is a woman. And MaMkhize also wants her brand to grow.

“From last night until today Mama Joy has been trending like nobody's business on Twitter, Facebook. It makes sense to MaMkhize that people now will realise there is a team called Royal AM.

“That is part of marketing another way round. I'm a soccer politician, I know about that.

“Like 'Botha' [Celtic fan Botha Msila], he was supposed to go from Celtic to Royal AM. I asked him why he didn't, but he didn't tell me.

“I asked the Royal fans and they said, 'No, we don’t want Botha, we can create our own No.1 supporter'.

AM entered the DStv Premiership this season by buying the franchise of Bloemfontein Celtic.

Famous Kaizer Chiefs supporter Saddam Maake was one of those to receive their Convid-19 vaccination jab at pop-up tents set up at FNB Stadium on ...
Sport
4 months ago

How much do you love your favourite team?
TshisaLIVE
3 years ago